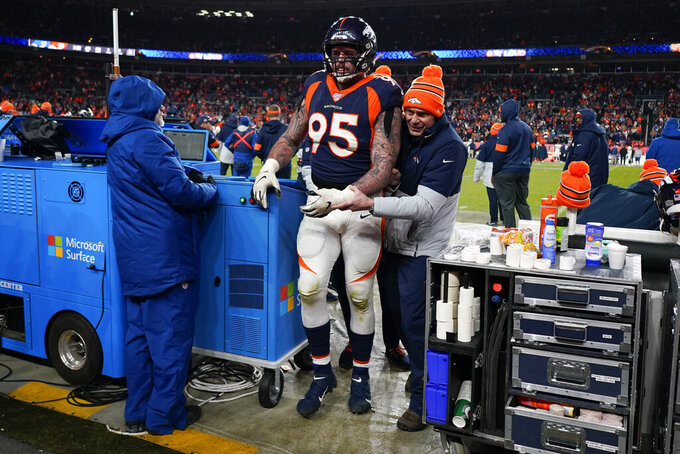 FILE - In this Dec. 1, 2019, file photo, Denver Broncos defensive end Derek Wolfe is helped off the field after getting hunt during the second half of the team's NFL football game against the Los Angeles Chargers in Denver. Wolfe's career year is finished and his eight-season stay in Denver might be over, too. The Broncos placed Wolfe on injured reserve Tuesday, 48 hours after he dislocated his left elbow in a 23-20 win over the Chargers. (AP Photo/Jack Dempsey, File)

ENGLEWOOD, Colo. (AP) — Derek Wolfe's career year is finished, and his eight-season stay in Denver might be over, too.

The Broncos placed Wolfe on injured reserve Tuesday, 48 hours after the defensive end dislocated his left elbow in a 23-20 win over the Los Angeles Chargers.

That ended his most productive season, which featured a career-best seven sacks, one more than he had his rookie year in 2012. Two of those came Sunday when he sacked Philip Rivers before he was injured late in the fourth quarter.

Wolfe collided with teammate Mike Purcell while covering Chargers running back Melvin Gordon on a fourth-and-1 pitch from the Los Angeles 34. That play didn't count because of a false start penalty, which had Wolfe seething in the locker room after the game.

"To have my season ended on a play that should have been blown dead makes me sick," Wolfe tweeted Tuesday. “I appreciate all of the well wishes. It breaks my heart to think this could be my last game as a bronco. I will heal up and come back stronger than ever. Down but never out."

Wolfe, who won a Super Bowl in Denver, will become an unrestricted free agent in March.

Wolfe started all 107 regular season games and five playoff games since the Broncos chose him 36th overall in the 2012 NFL draft out of the University of Cincinnati.

He had 34 tackles, seven sacks, his first career forced fumble and a pass breakup this year, proving a good fit in Vic Fangio's defense.

Fangio praised Wolfe on Monday, saying, “He was just solid and played good. He was where he was supposed to be with the right mindset and he played physical. I don’t know this for sure, you guys probably do, but I think he had a career high in sacks, which for a guy at this stage in his career speaks to his resiliency and the work that he’s put in and the effort that he was playing with.”

The Broncos replaced Wolfe on the roster with center Patrick Morris, whom they claimed off waivers from the Pittsburgh Steelers.

Morris, an undrafted free agent from TCU in 2018, spent his rookie season on the Steelers practice squad and was on Pittsburgh's active roster for two games this season.