Browns' star Beckham finds "acceptance" on and off field 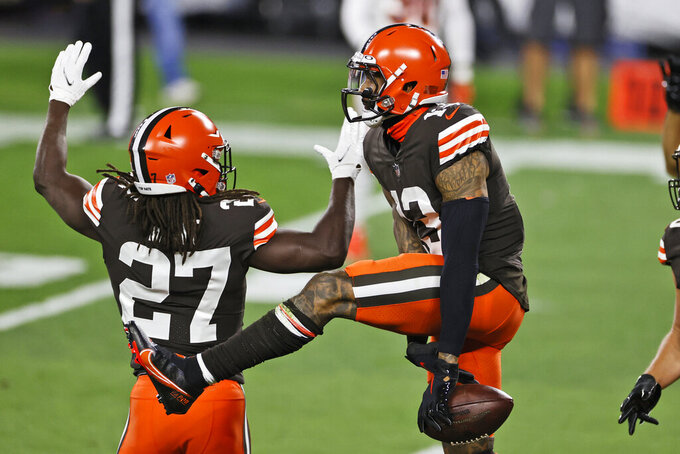 CLEVELAND (AP) — Odell Beckham Jr. felt the tug on his jersey and watched helplessly as Baker Mayfield's potential touchdown pass to him thudded to the turf.

No flag for pass interference.

No fight from Beckham, either.

“I think a younger me would have been more upset,” the Browns star receiver said. “And now just realizing, it is like life; you just kind of roll with the punches.”

Meet the new OBJ. Or at least a self-improved version.

One of the NFL's most polarizing players, Beckham said he has grown as a person. He's learning not to allow outside influences affect him and he's become more willing to defer to teammates instead of worrying about his statistics.

Beckham touched on his personal development — and other topics, including voting for the first time and Breonna Taylor's killing — during a Zoom call with reporters Thursday as the Browns dug deeper into preparations for Sunday's home game against Washington.

Beckham and his teammates are coming off a bounce-back win last week against Cincinnati. He caught a 43-yard TD pass and would have had a second one when he got behind Bengals cornerback William Jackson, who yanked on Beckham's jersey and slowed him down.

Beckham said he reacted by talking to the official. In years past, he may have done something very different — like knock over a kicking net on the sideline or get into a confrontation with a coach — actions he demonstrated while in New York.

This OBJ took a different route.

“I told him on the field, I was like, ‘Man, I have made mistakes in my career, but we have to move past that,’” Beckham said with a smile. “I am just here to play football, too. ... You missed a call, and whether it was or it was not pass interference, it was not called so I can’t harp on it or anything like that.”

Before speaking with the media, Beckham posted his outrage on Twitter about Taylor's case, saying he was “disgusted,” “heartbroken,” but not surprised.

On Wednesday, a grand jury in Kentucky failed to bring homicide charges against the officers who opened fire on Taylor when they burst into the Black woman's apartment while serving a search warrant. The state's attorney general said an investigation showed police had acted in self defense.

Beckham, who is one of 11 members of the Browns' social justice leadership committee, said he learned at a young age to question. But he's also secure in knowing there are things that are out of his power to change.

So, he accepts. It doesn't mean he likes to.

“It is disheartening,” he said. “It is all of those things when you just want justice and it does not seem like that is going to happen.”

Beckham said he had not yet spoken to his teammates about honoring Taylor, but they will "figure out a plan of action going forward.”

“You really want to see change,” he said. “It is not for the likes and attention and all of those things or to feel as if you are doing your part. It is something genuine in your heart to want to see change. I think that is the biggest thing is really just finding ways to continue to keep chipping away at it.”

Beckham recently revealed that he has never voted before, mostly because he felt uninformed and powerless. He now intends to use his platform to encourage others to exercise their rights.

He felt his admission showed strength, not weakness.

“I think coming out and saying that, I kind of take on more heat than someone else, and it allows someone else who is in that same situation to understand that it is OK and you have an opportunity to correct your wrongs or your mistakes going into the future,” he said. “Your voice can actually now be heard, and there is no better time than the present for your voice to be heard.”

As far as his role with the Browns (1-1), Beckham knows he may not produce the same statistics that he has in the past. He's fine with that.

Cleveland has two of the league's best backs in Nick Chubb and Kareem Hunt, and Beckham said he's willing to take on a lesser role if that means more wins. And if that means making a big block for Chubb, then he's on board.

“Just to see him running free and down the sideline is going to be a great feeling,” Beckham said. "I think a lot of my growth came in acceptance, acceptance of life and acceptance of things and just knowing that is what it is going to be and finding a way to create that block that springs him or whatever it is to help us win.”