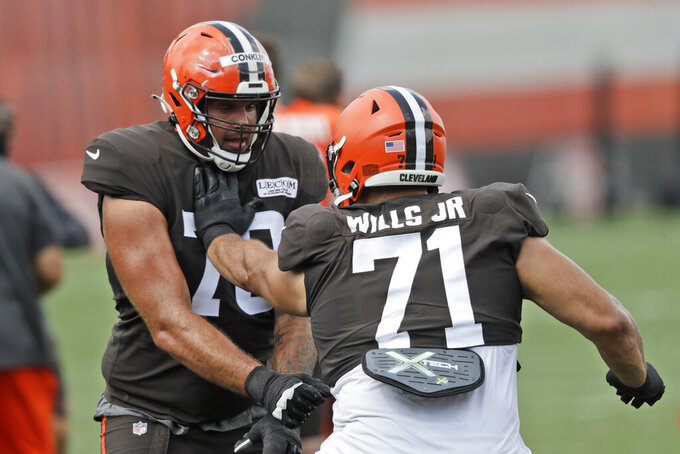 CLEVELAND (AP) — Backup right tackle Chris Hubbard will start over injured Jack Conklin for the Cleveland Browns when they host the Cincinnati Bengals on Thursday night.

Conklin, who was the Browns' biggest signing in free agency this winter, injured his ankle and a finger in last week's season-opening, 38-6 loss at Baltimore. He's active to face the Bengals, but the Browns announced before the game that Chris Hubbard is starting.

Also, the Browns will be without defensive end Olivier Vernon and rookie linebacker Jacob Phillips.

Vernon, who was slowed by injuries last season, was limited in practice this week with an abdominal issue and was listed as questionable for the game. Adrian Clayborn will start for Vernon.

Phillips, a third-round pick from national champion LSU, got hurt against the Ravens. His loss further weakens Cleveland's depth at linebacker as the Browns are already without starter Mack Wilson (knee).

Cincinnati kicker Randy Bullock will play despite a calf issue that affected him while missing a potential game-tying kick in the final seconds against the Chargers in Week 1. The Bengals claimed kicker Austin Seibert on waivers from the Browns as protection for Bullock.

Seibert was released by Cleveland on Monday after the 2019 draft pick and former Oklahoma standout missed an extra-point and field-goal try in the loss at Baltimore.