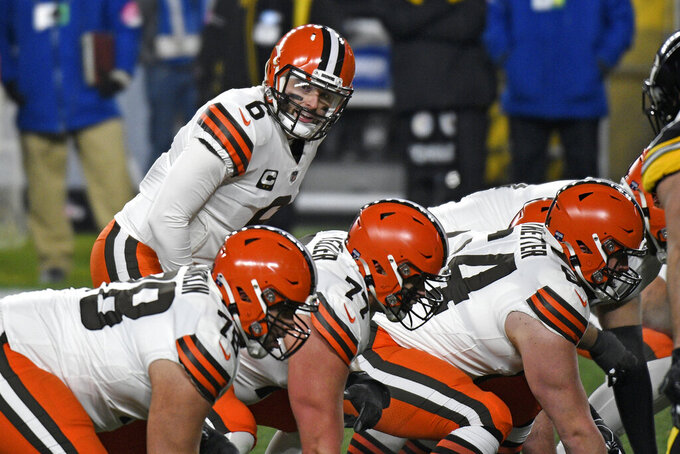 Cleveland Browns quarterback Baker Mayfield (6) lines up behind center during the first half of an NFL wild-card playoff football game against the Pittsburgh Steelers in Pittsburgh, Sunday, Jan. 10, 2021. (AP Photo/Don Wright)

CLEVELAND (AP) — As the Browns anxiously wait for Pro Bowl guard Joel Bitonio and top cornerback Denzel Ward to return from COVID-19 and join their playoff run, the team lost their replacements to injuries.

Dunn injured his calf during the fourth quarter of Sunday's 48-37 wild-card win while Jackson suffered a hamstring injury. Both are done for the season and won't play in this week's game against the defending Super Bowl champion Kansas City Chiefs.

It's not yet known if or when Bitonio or Ward will be back. Bitonio tested positive last week along with coach Kevin Stefanski. They both were back in Cleveland when the Browns stunned the Steelers for their first postseason win in 26 years.

Ward tested positive for COVID-19 on Dec. 31 and was eligible to return last week, but wasn't ready. Compounding his absence is that cornerback Kevin Johnson, who has made six starts this season, is also out with COVID-19.

Stefanski said on Monday that he expects to rejoin his team on Thursday. He watched Sunday's game from his basement at home.

Dunn gave the Browns a huge lift against the Steelers.

Although he had only been on the field for one play previously, Dunn played well as Cleveland's offensive line kept Baker Mayfield from being sacked.

“I will single out Michael Dunn, I thought he was outstanding,” Stefanski said Monday. “Really, really great in his technique, in his effort, in his assignment."

Dunn didn't get in much practice time before last week's game as the Browns had to close their facility for three days for contact tracing.

When Dunn got hurt against the Steelers, the Browns turned to backup Blake Hance to help them finish off their first road playoff win since 1969. Hance only signed last week with Cleveland after spending the season on the New York Jets' practice squad.

Mayfield didn't meet Hance until before the game in the locker room at Heinz Field. On Monday, Stefanski said he had yet to have any contact with Hance.