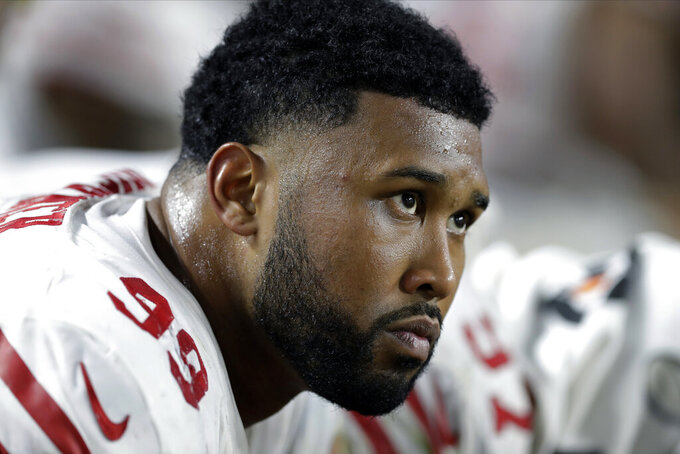 INDIANAPOLIS (AP) — DeForest Buckner found out the day before his 26th birthday he was being traded to Indianapolis.

He celebrated the day after by becoming the second-highest paid defensive tackle in the NFL.

Buckner couldn't imagine a better or more fitting honor, joining by a team that wanted him badly enough it dealt away a first-round draft pick to get him.

“I'm just excited to show everyone what I can bring to the table," he said on a conference call Wednesday. “After talking to my agent and seeing how he (general manager Chris Ballard) thinks I'm a key piece to what they're trying to build, as a player that's what you want to hear."

The Colts not only sent the No. 13 overall pick in next month's draft to San Francisco, they turned around and signed the 6-foot-7, 295-pound Buckner to a four-year contract worth $84 million.

It shouldn't come as a surprise.

From the moment Ballard took the Colts' job, he's continually worked on upgrading the defensive line. He talked about it again in January after explaining Indy needed a stronger interior pass rush, just days after finishing a 7-9 season as Indy missed the playoffs for the fourth time in five years.

He followed a career year in 2018 of 12 sacks and an All-Pro selection with 7 1/2 sacks and was voted the team MVP on last season's NFC champions. He also gives Indy a run-stuffing tackle who can keep offensive linemen from getting to linebackers.

Plus, his pass-rushing skills should help defensive tackle Denico Autry return to his 2018 form when he had nine sacks, and could help draw enough blockers to help defensive ends Justin Houston and Kemoko Turay provide outside pressure on quarterbacks.

“DeForest is a premier defensive tackle in this league and we’re thrilled to add him to our roster,” Ballard said in a statement issued by the team. “Adding a player of his caliber demonstrates the importance and commitment of building a strong defensive front. He will bring a veteran presence to our locker room and will lead with his work ethic. “

The official announcement came on the first day of the new league year when there's typically a flurry of action.

Instead, after all the twists and turns involving free agency and trades that provided a jolt to a sports world largely on hold because of concerns over the new coronavirus, league officials told teams not to make any announcements until deals were signed and physicals taken.

Buckner got his done. Eight-time Pro Bowl quarterback Philip Rivers, who agreed to a one-year, $25 million deal with Indy on Tuesday, apparently did not.

But that didn't prevent Buckner from talking about his soon-to-be teammate.

“You can see the team Chris Ballard has put together. They've got a lot of young talent and a lot of good guys on both sides of the ball, and you can see we landed Philip Rivers,” Buckner said. “You still saw last year they were in a bunch of games that went down to the last play and they just came up short. So I'm just excited to get things rolling."

Rivers will presumably replace Jacoby Brissett, who led the Colts to a 5-2 start after Andrew Luck retired abruptly in August, as the starter. The Colts lost seven of their last nine as Brissett attempted to fight through an injured left knee.

Though Ballard did not blame Brissett for the collapse, he believed a 38-year-old veteran, coming off perhaps the worst season of his 16-year career might help the Colts.

“We are going to create competition at any spot," Ballard said during last month's NFL scouting combine. “ Even when Andrew was our quarterback, we still studied the quarterback position. I just think it is important enough that it is a unique position. We know how hard they are to find and you’ve got to go in-depth each and every year for that spot.”

Brissett may be on the move, too, especially if the New England Patriots are interested in bringing back Tom Brady's one-time backup now that Brady is headed elsewhere.

And the combination of moves has Buckner eager to get started.

“It was definitely a nice little, late birthday gift," he said, “signing that contract today."