Burrow returns for Bengals as Dolphins rally for win 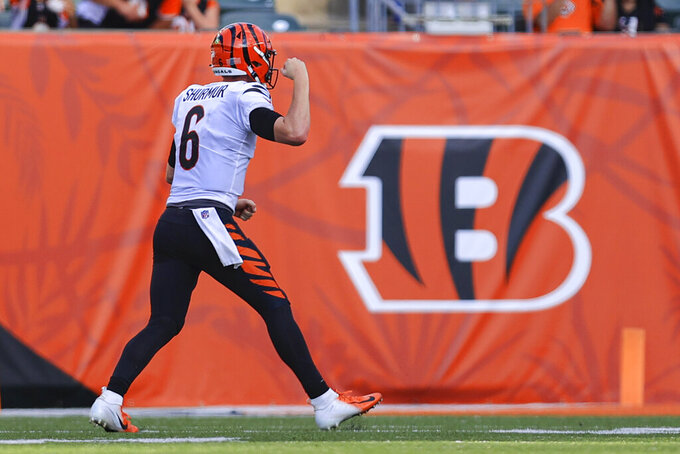 Cincinnati Bengals quarterback Kyle Shurmur (6) celebrates a throw for a touchdown against the Miami Dolphins in the second half of an NFL exhibition football game in Cincinnati, Sunday, Aug. 29, 2021. (AP Photo/Aaron Doster)

CINCINNATI (AP) — Nine months after tearing both the ACL and MCL in his left knee, Bengals quarterback Joe Burrow took his first snaps Sunday against the Miami Dolphins, who rallied to win 29-26 in a wild preseason finale for both teams.

“Felt good to be back,” Burrow said. “Not only for me but to be back in front of the fans.”

Things didn't end well for the Bengals, however.

In the fourth quarter, Reid Sinnett tossed a 43-yard TD pass to Kirk Merritt. Then with 1:21 left, he scrambled on fourth-and-15 and found a leaping Chris Myarick in the corner of the end zone for a 34-yard TD to put the Dolphins ahead.

“Reid made some big throws,” Dolphins coach Brian Flores said. “He battled to the bitter end and made a play at the end. I'm excited for him. He played his butt off tonight.”

According to the Dolphins, Sinnett's 343 passing yards are the most by any one player in a preseason game since at least 2017.

Burrow, the overall No. 1 pick in the 2020 draft, was greeted by a standing ovation and chants of “Joey, Joey” when he came out for the Bengals' first offensive series. Burrow took three snaps before the Bengals were forced to punt.

“It’s good for everybody,” Taylor said of the ovation Burrow received. “It’s just kind of, ‘He’s back.’ There was a lot of unknown there last November. I think to see him back in the huddle and get things back to normal is great for all of us.”

His first and only pass attempt was dropped by former LSU teammate Ja'Marr Chase, who has had issues with drops this preseason.

“Not worried about it,” Burrow said. “I know the kind of guy Ja’Marr is. The kind of player he is. He’ll be ready to go Week 1.”

Burrow was medically cleared in time for the opening of training camp on July 28 but had not yet played in a preseason game. He passed for 2,688 yards and 13 touchdowns last season prior to the injury in Week 10.

Sinnett started at quarterback for the Dolphins, who rested most of their starters on Sunday, including Tua Tagovailoa. Stinnett was 22 of 33 for 343 yards with two TDs and an interception.

Rookie running back Gerrid Doaks rushed for 41 yards on 14 carries with two touchdowns for Miami.

The Dolphins only dressed 45 players and rested the majority of starters on Sunday, but Flores said there are still some roster decisions to be made.

“I observed throughout today's game some guys who are close that played well,” he said. “There are some hard decisions we're going to have to make.”

Flores addressed reports that the Dolphins are interested in acquiring Texans QB Deshaun Watson, saying he has faith in Tua Tagovailoa.

“I’m very confident in Tua," Flores said. “He did a lot of good things in training camp. Played well last week. I’m interested in the players on our team. Any conversations that we have or don't have with other clubs are going to be internal.”

Watson, who has passed for 14,539 yards and 104 TDs in four seasons in Houston, is facing several civil lawsuits for sexual misconduct.

Bengals rookie kicker Evan McPherson helped his chances of winning the starting job with a 57-yard field goal on the last play of the first half. If this was a regular-season game, it would have tied the longest field goal in franchise history. On Dec. 19, 2019, Randy Bullock nailed a 57-yarder, also against the Dolphins.

In the third quarter, Bengals receiver Stanley Morgan had a bubble screen pass bounce off his hands only to have it caught on the run by teammate Trent Taylor for a 45-yard reception to the Miami 1-yard line, setting up a go-ahead touchdown run by Jacques Patrick.

Doaks, who starred at the University of Cincinnati, scored first-half touchdowns on 3-yard and 1-yard runs. Doaks, drafted in the seventh round by Miami in 2020, rushed for more than 2,100 yards and 14 touchdowns for the Bearcats. “He's tough, smart, competitive, smart kid, team first,” Flores said. “Really all the attributes you're looking for in a Miami Dolphin.”

The Dolphins and Bengals open the regular season on Sept. 12 when the Bengals host the Vikings and the Dolphins travel to New England.