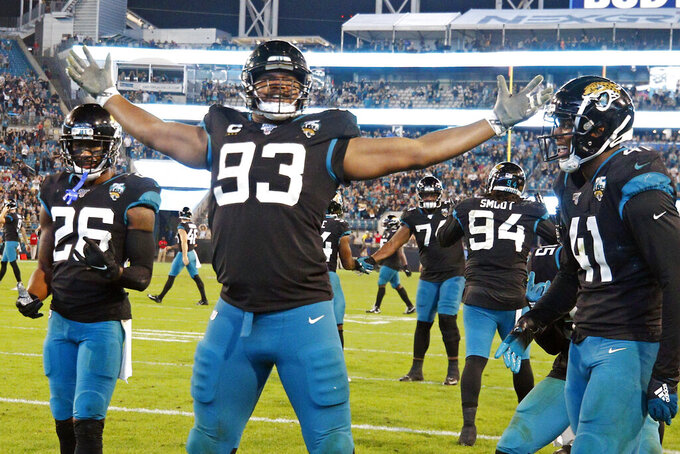 FILE - In this Sunday, Dec. 29, 2019, file photo, Jacksonville Jaguars defensive end Calais Campbell (93) celebrates his touchdown against the Indianapolis Colts on a fumble recovery with safety Jarrod Wilson (26) and linebacker Josh Allen (41) during the second half of an NFL football game, in Jacksonville, Fla. On Sunday, March 15, 2020, the Baltimore Ravens agreed to trade a fifth-round draft pick in the upcoming draft to the Jacksonville Jaguars for veteran defensive lineman Calais Campbell. (AP Photo/Stephen B. Morton, File)

The NFL's off-the-field business has joined most of the rest of the country in full work-from-home mode, turning signings and trades into tests of patience and technology.

Conducting a free agency period during a global pandemic has produced complications well beyond the usual salary-cap constraints.

“It is an offseason unlike any other I have experienced in my three decades in the business," said Drew Rosenhaus, whose agency Rosenhaus Sports represents more than 100 players in the league.

Because team facilities have closed out of concern for the spread of the coronavirus, players have not been able to take the physical exams required to finalize contracts with team physicians.

In some cases, both sides have been able to alternatively agree on a third-party doctor in the player's home area. In other situations, the process has hit some snags of disagreement.

“Every team prefers their own doctors for the player they're giving millions of dollars to, to do a physical, so I understand where teams are coming from,” said Ron Slavin, of the Sportstars agency. “But we're in this situation where you would hope everybody would work together to make it right.”

Blake Baratz, of the Institute for Athletes, posted on Twitter a sign-of-the-times picture of him at the home of Minnesota Vikings fullback C.J. Ham with the two of them bumping elbows in celebration of him signing his new contract. They're both based in the same market as the team, in this unique case, but that's the exception and not the rule. The league has also halted club personnel travel to meet with free agents as a safeguard.

“It is in many respects a setback for players that had injuries last year where some clubs would like to spend more time with them, and not taking visits is tough for them because they don’t get a chance to meet with coaches and members of the organization and really get to know them,” Rosenhaus said. "In similar respects, it is tough for NFL teams if they have questions about a player’s background or his characters issues.”

He added: “The money doesn’t last forever and if a guy has a chance to make money sometimes to provide security for his family, they don’t have the luxury of waiting.”

So the market is open, but not as wide as normal. The NFL does not allow electronic signatures on contracts, requiring plenty of printing, scanning and sending.

“Yes, the NBA allows e-signatures. Yes, a lot of financial companies allow them. Millions of dollars can be transmitted via e-signatures, but the National Football League will not,” said Priority Sports and Entertainment agent Mike McCartney, who is working from his Chicago-area home. “At least at the office, we had mechanisms to print and scan, and it was not very difficult. At home, it’s much more of a challenge for me. I don’t know if it’s true for every agent. Maybe I need a new printer!”

Clients, naturally, have been quizzing McCartney after they've agreed to deals with their new clubs about the next steps.

“Players are asking me questions, ‘When do I get to go to my new team? When does football start?’ I don’t have a crystal ball. No one knows where this thing is headed," McCartney said. "We’re praying that it stops quickly, but the worst-case scenarios are scary. So we’re literally taking a lot of this day by day.”

Then there's the matter of managing salary caps and trading players while the world is dealing with unprecedented devastation related to the virus.

“While it favors myself, my business, and my clients, it is absolutely asinine, inconsiderate, and frankly ignorant for the NFL to start this league year amongst everything that is going on. It is a logistical nightmare and completely avoidable,” Baratz tweeted this week.

The NFL changed course on Thursday, allowing teams to announce agreements they have reached with free agents, as well as trades that are formally submitted to the league. Though the NFL's new business year began on Wednesday, the league initially instructed teams to hold back direct confirmations of those transactions because they are not considered official until players have passed physicals and contracts are signed. The agreements and trades leaked out anyway.

The biggest move made on Thursday? Todd Gurley got cut by the Los Angeles Rams, less than two years after one of the game's best rushers got a big new deal.

Plagued by injury lately, Gurley will still count $20.15 million against the salary cap for the Rams. He signed a four-year, $60 million contract with $45 million guaranteed in June 2018, but after helping the Rams win the NFC that season, he hurt his left knee. That slowed him considerably, first in the playoffs leading up to the Super Bowl, then throughout the 2019 season. He rushed for a career-low 857 yards last year, playing sparingly.

His release can't be comforting to other running backs around the NFL. If Gurley is expendable — yes, the contract and injury played a key role — then can any running back feel secure?

— The Detroit Lions agreed to trade their best cornerback, Darius Slay, to Philadelphia. Rosenhaus confirmed the deal and that Slay has agreed to a three-year, $50 million extension with the Eagles. Slay sought a new contract before last season and did not attend Detroit's mandatory minicamp. He ended up reporting to training camp and drew a third career Pro Bowl selection.

— The Denver Broncos waived 2013 Super Bowl MVP Joe Flacco. He had lost his job to rookie Drew Lock and also has neck issues that could affect him if he continues playing.