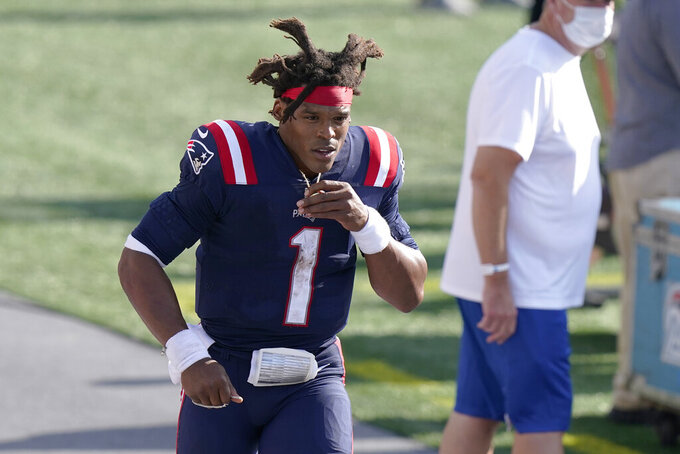 FILE — New England Patriots quarterback Cam Newton leaves the field after an NFL football game against the Miami Dolphins, in this Sunday, Sept. 13, 2020, file photo, in Foxborough, Mass. The Patriots released quarterback Cam Newton on Tuesday, Aug. 31, 2021, clearing the way for rookie Mac Jones to open the season as New England's quarterback, according to a person with knowledge of the move. The person spoke to the Associated Press on condition of anonymity because the decision has not been announced. (AP Photo/Steven Senne, File)

Cam Newton followed Mac Jones along the sideline, holding his right hand up, waiting for the rookie quarterback to slap it after the No. 15 overall pick threw a touchdown in a preseason game Sunday night.

Newton may as well have been congratulating Jones for taking his job.

The New England Patriots released Newton on Tuesday hours before NFL teams reduced rosters to 53 players. Jones, the first QB selected in the first round during Bill Belichick’s 22 seasons in New England, takes over after Newton was a one-year stopgap following Tom Brady’s departure.

Newton, the 2015 NFL MVP, headlines the list of players now seeking a new team. He was 7-8 as a starter last season.

“He started at a much higher point than what he did last year, so definitely moving in the right direction,” Belichick said of Newton on Monday.

A day later, he was moving out of Patriot Way.

Newton is not vaccinated and recently missed practice time because of COVID-19 protocols. It’s unknown whether that factored into New England’s decision to let him go.

“Everyone was considered. That was part of the production, let’s start talking about this and also, ‘Is he vaccinated or not?’ Can I say that that was a decision-maker? It was certainly in consideration,” Meyer said.

The Eagles released wide receiver Travis Fulgham, who had an excellent five-game stretch last season before disappearing from the offense. Veteran running back Jordan Howard also was cut by Philadelphia.

Baltimore released quarterback Trace McSorley, leaving Tyler Huntley as the backup to Lamar Jackson. Carolina cut quarterback Will Grier, a third-round pick in 2019. The Panthers are going with Sam Darnold and P.J. Walker as their quarterbacks, for now.

The Falcons kept backup quarterbacks Josh Rosen and Feleipe Franks. Rosen, a former first-round pick by Arizona, survived the cuts one week after signing with Atlanta and playing in only one preseason game.

The Browns, a legitimate title contender after so many miserable seasons, surprisingly released wide receiver KhaDarel Hodge, had a solid preseason, catching two touchdown passes in the past two games. He’s also been a valuable special teamer. However, he fell behind Donovan Peoples-Jones, Rashard Higgins and rookie Anthony Schwartz on the depth chart as the No. 3 behind Jarvis Landry and Odell Beckham Jr.

Cleveland also kept defensive tackle Malik McDowell, a former second-round pick by Seattle whose career once seemed over following an ATV accident and two arrests in 2017.

The Chiefs placed offensive lineman Kyle Long, who came out of retirement only to break his tibia at the start of camp, on the physically-unable-to-perform list.

The Detroit Lions left themselves without a kicker, releasing Randy Bullock and Zane Gonzalez.

Tennessee cut wide receiver Dez Fitzpatrick, a fourth-round pick. The Titans traded up 15 spots to No. 109, swapping their fifth-round pick and seventh-rounder for the receiver, who struggled with dropped passes.

The Raiders cut speedy receiver John Brown after signing him earlier this offseason to replace the departed Nelson Agholor. Brown had $3.24 million guaranteed on the one-year deal but fell behind Henry Ruggs III, Bryan Edwards and Zay Jones on the depth chart at outside receiver and was cut.

Seattle cut defensive tackle Robert Nkemdiche, a former first-round pick who had not played in the league since 2019 and was trying to revitalize his career with the Seahawks.

Green Bay cut incumbent punter JK Scott and traded a sixth-round pick to the Rams for punter Corey Bojorquez and a seventh-round selection. Both the Giants and Cowboys cut their long snappers with the intention of bringing them back after other roster moves are made.

Several teams made trades to reach the roster limit.

The Chiefs traded offensive lineman Yasir Durant to the Patriots for a seventh-round pick in the 2022.

The Eagles dealt offensive lineman Matt Pryor and a seventh-round pick in 2022 to the Colts for a sixth-rounder.

The Lions got wide receiver Trinity Benson and a 2023 sixth-round pick from Denver for fifth- and seventh-round draft picks in 2022.

The Niners traded linebacker Jonas Griffith to Denver for a sixth-round pick. The deal also includes a swap of seventh-rounders.

The Jets sent tight end Chris Herndon and a sixth-round pick in 2002 to the Vikings for a fourth-rounder.

Some teams still hadn't announced their roster moves a couple hours after the deadline.