Cardinals being coy about who will go at No. 1 overall 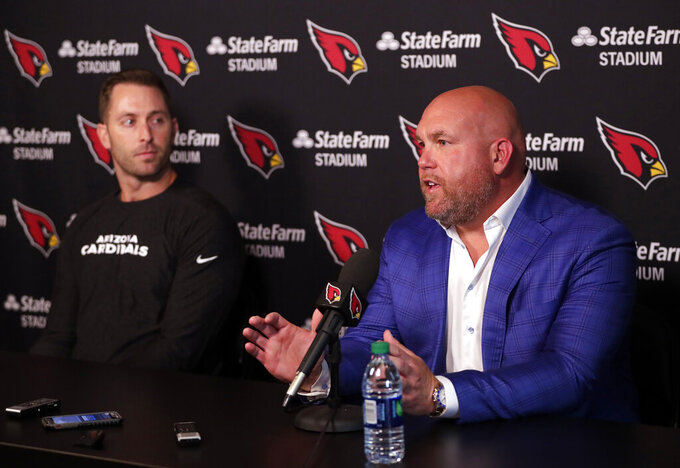 TEMPE, Ariz. (AP) — The Arizona Cardinals used the 10th overall pick of the 2018 draft on Josh Rosen, hoping the former UCLA star would be their quarterback of the future.

Rosen had some ups and downs during his first season, as many rookies do, but did nothing to dissuade the Cardinals from believing he could be their guy for years to come.

Yet with the 2019 draft just around the corner, there's speculation the Cardinals could use the No. 1 overall pick on another quarterback.

Kyler Murray's decision to play football not baseball creates a new option for an Arizona team with a new coach and a new offensive system.

The Heisman Trophy winner from Oklahoma has a unique skillset, able to play in the pocket or beat teams with his legs, which could be a perfect match for coach Kliff Kingsbury's dynamic offense.

"We are not done with this process," Cardinals general manager Steve Keim said.

Rosen was a good fit for Steve Wilks' offense. Murray may be better for Kingsbury's.

The new coach ran an offense at Texas Tech that put up prodigious numbers and had two quarterbacks — Case Keenum and Patrick Mahomes — who led the nation in passing.

With a strong arm and superb running ability, Murray has the tools to slide right into Kingsbury's offense.

Of course, all the Kyler Murray talk could just be a smoke screen.

The Cardinals could be using the Murray speculation to drive up value and trade interest to possibly slide down in the draft, still get a standout player, along with more picks.

Arizona could just use the No. 1 pick to shore up a defense that has struggled mightily, possibly Ohio State's Nick Bosa.

"They're both dominant players," Keim said. "They're can't-miss prospects."

A few more things to look for from the Cardinals at the draft:

The Cardinals have been searching for a player to play opposite cornerback Patrick Peterson pretty much since they drafted the three-time first-team All Pro in 2011. Arizona has tried multiple players opposite Peterson and signed Robert Alford to a three-year deal after he was released by Atlanta, but he'll turn 31 during the 2019 season so the Cardinals may use a high pick to build for the future — possibly with the 33rd overall pick.

Arizona got a huge boost when star receiver Larry Fitzgerald decided to return for a 16th season. Christian Kirk had a solid rookie season and the Cardinals signed former Chicago receiver Kevin White, who has struggled with injuries.

Arizona could use a shifty receiver to play opposite Fitzgerald, particularly in the "Air Raid" offense Kingsbury wants to utilize. The Cardinals might also be interested in local product N'Keal Harry, big, physical receiver from Arizona State, but it might be a stretch for him to still be available at No. 33.

Arizona's offensive line struggled with injuries, keeping pass rushers away from Rosen and establishing a running game. The Cardinals should get some help with the additions of J.R. Sweezy and Marcus Gilbert via free agency, but need more depth. Some of that will likely come from the draft.

The Cardinals have one of the best edge rushers in Chandler Jones and signed Terrell Suggs during the offseason. But Suggs is 36, so they'll have to hope he still has something left in the tank or add a young edge rusher. Arizona also could use help on the interior defensive line to play with steady Corey Peters.