Carlson thrives with Raiders after release by Vikings 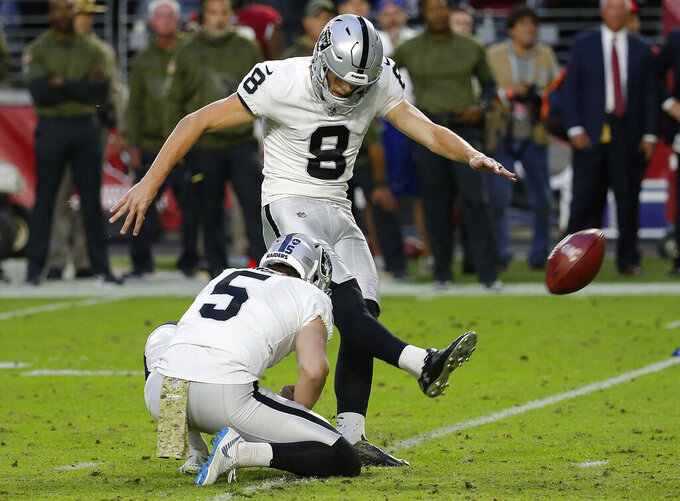 FILE - In this Nov. 18, 2018, file photo, Oakland Raiders kicker Daniel Carlson (8) boots the winning field goal as punter Johnny Townsend (5) holds during the second half of an NFL football game against the Arizona Cardinals in Glendale, Ariz. Carlson could not make a field goal during his short stint in Minnesota and now he cannot miss ever since getting a second chance in Oakland. He returns to Minnesota on Sunday, Sept. 22, 2019, for the first time since the Vikings cut their former fifth-round pick two games into his rookie season as one of the game's most accurate kickers. (AP Photo/Rick Scuteri, File)

ALAMEDA, Calif. (AP) — Daniel Carlson couldn't make a field goal during his short stint in Minnesota and now he can't miss since getting a second chance in Oakland.

Carlson returns to Minnesota on Sunday for the first time since the Vikings cut their former fifth-round pick two games into his rookie season and now he's one of the game's most accurate kickers.

The Vikings expected that to happen in Minnesota after trading up to use a draft pick on a kicker for just the second time in 40 years.

But Carlson didn't get much of a chance to prove himself. He made a 48-yard field goal and all three extra points in his Vikings debut but things quickly turned sour from there.

The next week in Green Bay, Carlson missed field goals of 48, 49 and 35 yards, with the last two failed tries coming in overtime and forcing the Vikings to settle for a 29-29 tie with the rival Packers.

That led to his release and the time off he spent working on his technique and approach before signing a few weeks later with the Raiders.

"Those were some tough times, getting cut early on in my NFL career, but it's been fun seeing how it's all worked out," he said. "I'm in a great spot here in Oakland. I just want to improve and get better personally."

Carlson has made 18 of 19 field goals attempts and all 22 extra points since joining Oakland, providing a sense of security for coach Jon Gruden at that crucial position.

Carlson's biggest moment for the Raiders came last November when he kicked a 35-yard field goal on the final play of a 23-21 win at Arizona.

"He's an ice man," Gruden said. "He's kicked the ball in clutch situations. He helped us beat Arizona at the buzzer. His kickoffs have really improved, if you've seen that. He's had some touchbacks. Great guy, got a huge upside, big leg, but we really are proud to have him."

Things have worked out better for Carlson since his release than they have for the Vikings. Minnesota signed veteran Dan Bailey to replace Carlson but that hasn't gone smoothly.

Bailey made just 21 of 28 field goals last season with six of his misses coming from inside 50 yards.

That prompted the Vikings to trade a fifth-round pick this summer to Baltimore for kicker Kaare Vedvik. That pick proved to be a waste as well with Vedvik getting cut before the start of the season.

Bailey retained the job but then missed a field goal and had an extra point blocked after a penalty pushed it back to 48 yards in last week's 21-16 loss at Green Bay — the same place where Carlson's tenure in Minnesota ended.

Bailey is still building chemistry with new holder Britton Colquitt and hopes to get Minnesota's long-troublesome kicking situation back on track.

"I feel like we're really coming along there. I feel like we all have a lot of confidence in each other," Bailey said, reflecting on his miss against the Packers. "Obviously I would like for it to go in, and I wish I could have it back, but that's the nature of this deal. I felt like I put a good hit on it, so there's no alarms really going off on this end."

All Carlson has done during that time is make his kicks, tying for the best field goal percentage in the NFL at 94.7% since signing with the Raiders last October.

"Honestly, I'm happy for him," Vikings coach Mike Zimmer said. "I mean, do I have regrets? I like our kicker who we have now, but did I second guess it? Sure. He's done great there, and I think he's a very, very talented kid. I wish him well, just not this week."