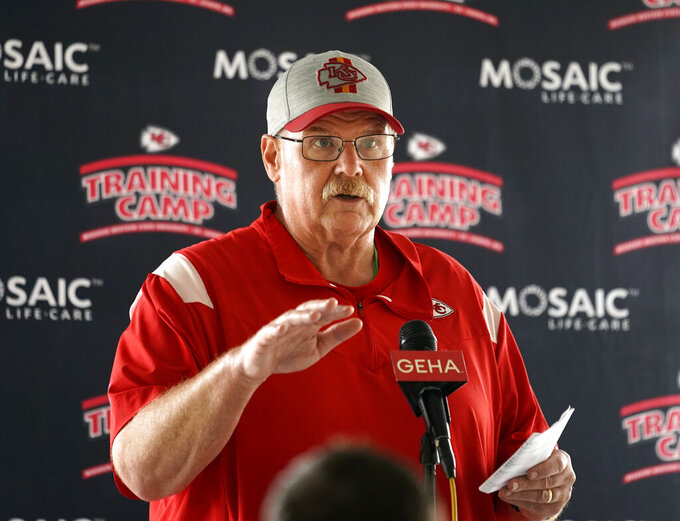 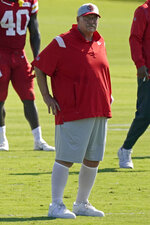 ST. JOSEPH, Mo. (AP) — The Kansas City Chiefs have been required to make changes to their coaching staff over the years, the natural byproduct of success, as top assistants such as Doug Pederson and Matt Nagy got hired away for better jobs elsewhere.

This past offseason, though, Andy Reid made some changes that seemed unnecessary at first glance.

It began when running backs coach Deland McCullough left for a job as the associate head coach at Indiana, opening up a job once held by current Chiefs offensive coordinator Eric Bieniemy. Rather than simply hire someone to replace McCullough, Reid decided to move wide receivers coach Greg Lewis into the role — even though his work with Tyreek Hill and the rest of the Chiefs' pass-catching crew has been a big reason for their offensive success.

That began a game of musical chairs, of course.

Joe Bleymaier moved from the quarterbacks room, where he was helping Patrick Mahomes become one of the league's best players, to handle the wide receivers. David Girardi moved into that role as assistant quarterbacks coach, and his spot was taken by Connor Embree, who was working on the defensive side.

So why did Reid agree to so much maneuvering on a staff returning from back-to-back AFC titles relatively intact?

“I want guys to have the opportunity to grow,” Reid said.

“Greg actually came to me about wanting the challenge of coaching the running backs," he continued, "and as you guys know about how I feel about Greg, he’s very, very intelligent, has a great feel for the game, did a phenomenal job with the wide receivers. And now he’s able to learn that other side — the protection side and all that goes into coaching the running backs and the run game, and still give them tips in the pass game to make them even better than what they are now.”

It's a position that the 41-year-old Lewis, who spent eight years playing wide receiver in the NFL, has never coached before, and he's taking on the job for a team that once again has Super Bowl aspirations.

Yet the change could come at the perfect time. Several wide receivers, such as Demarcus Robinson and Mecole Hardman, appeared to stagnate in their development the past couple of seasons. And with the departure of Sammy Watkins in free agency, the Chiefs are desperate for someone to establish themselves as the No. 2 wide receiver.

Just maybe, Bleymaier will be able to pull something out of them.

“It’s a little unique with Greg still being here, Coach Lewis being just down the hall,” Bleymaier said. "I go to him daily for questions, advice, our guys go to him. I’m the new wide receiver coach, but we kind of just gained an extra receiver coach because Greg is still there, and the guys feel free to go talk to him as well. So it’s been seamless at least for me.”

As for the running backs room, Lewis brings a unique skillset that could push Clyde Edwards-Helaire and the rest of his buddies to a whole new level. The Chiefs have always required them to be just as adept at catching the ball as running it, and Lewis should be able to help them with releases, refining their routes and even blocking downfield.

Edwards-Helaire had 36 catches for nearly 400 yards last season, even though he missed three games to injuries. Darrel Williams and current free agent Le'Veon Bell also had roles in the passing game.

“I don't see it as a challenge. I see all of us as football coaches,” Lewis said as the Chiefs wrapped up camp at Missouri Western State University, and looked forward to their second preseason game in Arizona on Friday night.

“For me,” Lewis said, "it's understanding the different aspects of the game. ... Obviously, I haven’t played running back, but I understand football and I’ve been around great players, great coaches, and I think I am going to bring some more insight to just help them develop and help us be better as a group.”

NOTES: Reid said the starters will play most of the first half against the Cardinals, then the second and third teams will handle the second half. ... DE Frank Clark (hamstring), DT Derrick Nnadi (hip) and RG Laurent Duvernay-Tardif (hand) did not work out Wednesday. ... Reid said at least one more player received his COVID-19 shots during camp, but the Chiefs were already near the top of the league in percentage of players vaccinated. “I know these guys talk to their families and tell them, ‘If you come here, you better be vaccinated,’ and that type of thing, which isn’t always an easy thing to do with family and friends,” Reid said. "So, the guys have been good with that.”