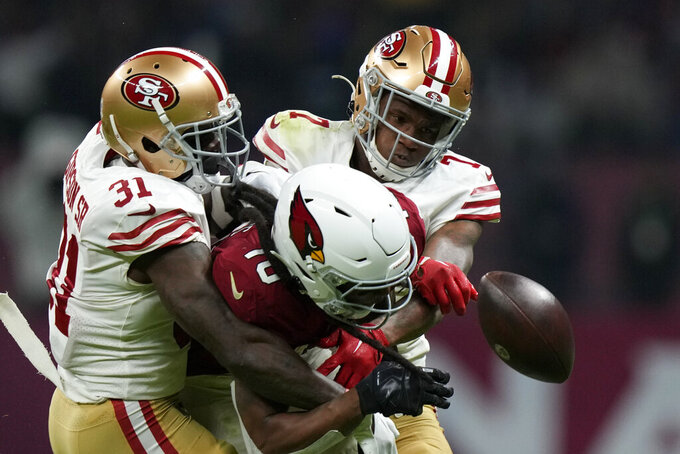 TURNOVER DIFFERENTIAL: Chargers plus-1; Cardinals plus-3.

CARDINALS PLAYER TO WATCH: Safety Budda Baker is having another great season even though the Cardinals continue to struggle. He led the team with 10 tackles against the 49ers despite pushing through the pain of a sprained ankle.

KEY MATCHUP: Chargers QB Justin Herbert is coming off one of his best games of the season against the Kansas City. The third-year player completed more than 76% of his passes for 280 yards, two touchdowns and one interception. He's got a juicy opportunity against the Cardinals defense, which has regressed during the season and gave up four passing touchdowns in the loss to the Niners last Monday night.

SERIES NOTES: The Chargers have won four of the past five games against the Cardinals. Despite the close proximity — it's about a six-hour drive between Los Angeles and Phoenix — the teams have played against each other just six times since 2000.

STATS AND STUFF: The Chargers have lost three of their last four games. The past two losses have come by six and three points, respectively. ... Herbert ranks second in the NFL in pass completions (277), fifth in yards passing (2,730) and seventh in passing TDs (16). ... Austin Ekeler, Joshua Palmer and Mike Williams all have at least 400 yards receiving this season. Ekeler leads the team with four TD catches. ... Brandon Staley has a 14-13 record in two seasons as the Chargers coach. ... The Cardinals have also lost three of their last four games. ... Arizona is 1-4 in games at State Farm Stadium this season. ... Baker has 448 tackles over the past four seasons, which leads NFL defensive backs by a large margin. It's more than 100 tackles in front of Minnesota's Harrison Smith, who has 345. ... The Cardinals have used 76 players in at least one game so far this season, which leads the NFL. ... The Cardinals are 9-6 against teams from the AFC during Kingsbury's four-year tenure. ... RB James Conner has scored 22 touchdowns over 23 games in his two seasons with the Cardinals. ... Arizona's coaching staff is in flux after Sean Kugler was fired Monday. He was the team's offensive line coach and run game coordinator. He was dismissed after an alleged off-the-field incident in Mexico City on Sunday night. ... This is the Cardinals' 12th straight game to open the season. They'll get their bye week in Week 13.

FANTASY TIP: Murray hasn't had a great season, but as long as he plays, don't be afraid to put the fourth-year quarterback in your lineup. The Chargers have given up the 25th-most yards in the league and the 29th most points. Arizona's defense hasn't had a good year, either, so this game has offensive slugfest written all over it.