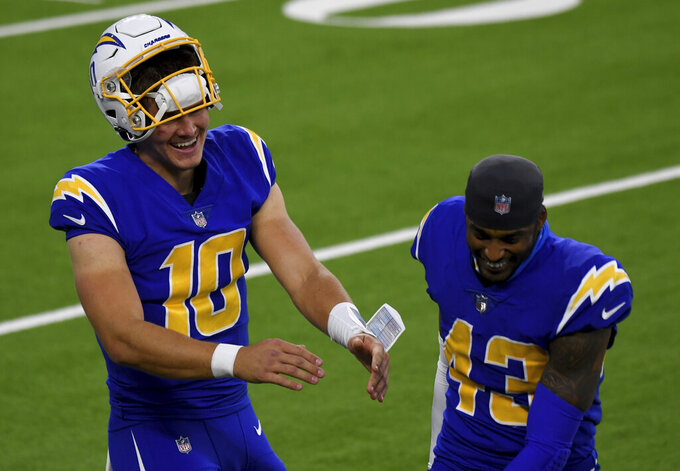 But the Los Angeles Chargers rookie quarterback has had to quickly move on since there isn't much time between games.

Herbert makes his Thursday night debut when the Chargers travel to Las Vegas to face the Raiders. Not only is it Herbert's second prime-time game this season, but it will mark the first time he has faced an opponent twice.

“It’s a great chance because we’ve got film on them and we're familiar with them," Herbert said. “So it’s important to watch that game film, learn from it and correct the mistakes that we made.”

Herbert comes in with plenty of confidence after the Chargers' 20-17 win over Atlanta. He completed three key passes on the final drive and got Michael Badgley into range to make a 45-yard field goal as time expired. Herbert was able to direct the final drive without the starting right side of his offensive line — tackle Bryan Bulaga and guard Trai Turner — as well as wide receivers Keenan Allen and Mike Williams.

Of those four, only Turner was listed as a full participant during Tuesday’s practice. Bulaga remains in concussion protocol, making him doubtful at best for Thursday’s game, while Allen (hamstring) and Williams (back) were limited. Williams was in for only one series against Atlanta and Allen’s injury occurred on the next-to-final possession.

“I know it has been a tough year for him obviously. He’s putting up a lot of great numbers and playing great. We just haven’t been able to come up with some of those wins for him,” tight end Hunter Henry said. “So to have him be able to lead a drive like that downfield towards the end it was awesome.”

Herbert thought he had his first game-winning drive against the Raiders on Nov. 8. He threw a four-yard pass to tight end Donald Parham Jr. in the right back corner of the end zone on the final play that was originally ruled a touchdown. But replay overturned the call after it was determined Parham did not maintain possession throughout the catch.

The Chargers (4-9) have lost nine straight games to AFC West foes, with all three this season coming down to the final play.

“He’s been able to face adversity. He’s had some tough moments but he comes back every single week strong,” Raiders coach Jon Gruden said of Herbert. “I saw him knocked out of the game against us, get up, come back in and throw two perfect passes.”

Herbert goes into Thursday's game averaging 288.9 passing yards per game. He has tied a rookie record with six 300-yard passing games, with one of them coming against the Raiders. Herbert was 28 of 42 for 326 yards and two touchdowns in the loss.

Herbert also goes into the game two TD passes away from tying Baker Mayfield's single-season rookie mark of 27 set two years ago. In Herbert's previous prime time start, he set a rookie “Monday Night Football” mark with four TDs. Las Vegas (7-6) has some uncertainty on defense after Paul Guenther was replaced as coordinator by Rod Marinelli after Sunday's loss to Indianapolis.

With the quick success he has had, even Herbert seems taken aback at times with how quickly everything has come together.

“It would have been tough to imagine early on, especially not knowing if I would play or not this year,” he said. “It’s one of those things that (QB) coach (Pep) Hamilton and I talked about. He said, ‘You know, you need to be ready because if and when it does happen, you’re gonna have to go out there and you’re gonna need to be ready.’ It was pretty quick turnaround but I felt pretty prepared to go in.”