Chargers look to rebound from OT loss in visit to Texans 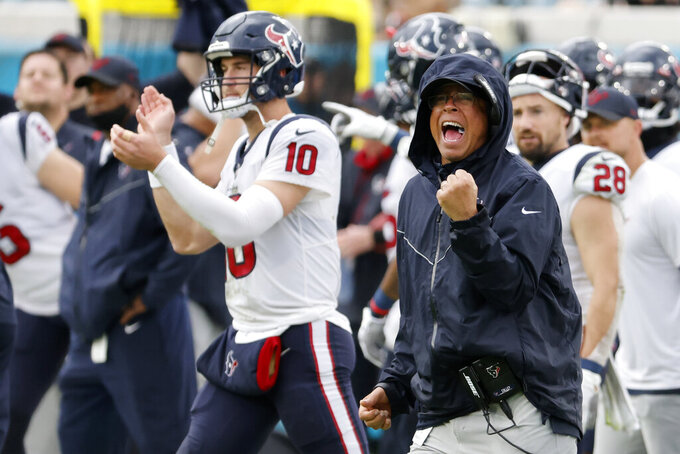 Houston Texans head coach David Culley, right, and quarterback Davis Mills (10) celebrate a field goal against the Jacksonville Jaguars as time expires in the first half of an NFL football game, Sunday, Dec. 19, 2021, in Jacksonville, Fla. (AP Photo/Stephen B. Morton)

OPENING LINE: Chargers by 9 1/2, according to FanDuel SportsBook.

CHARGERS PLAYER TO WATCH: QB Justin Herbert is tied with Tampa Bay’s Tom Brady for most 300-yard games this season with eight. He has passed for 300 yards in three straight road games. Herbert’s 8,394 yards are the most by a player in his first two seasons.

TEXANS PLAYER TO WATCH: WR Nico Collins will have to step up Sunday if top receiver Brandin Cooks can't come off the reserve/COVID-19 list. The rookie from Michigan has performed well in limited work and is second on the team with 311 yards receiving but has yet to score a touchdown. He’s started the last four games and his best performance came two weeks ago when he had five catches for 69 yards against the Seahawks.

KEY MATCHUP: Houston QB Davis Mills vs. L.A.’s pass defense. The rookie has been better than he was early in the season in the two starts since Tyrod Taylor was benched. He’s thrown for 550 yards combined with three touchdowns and one interception. But now he’ll face a defense that ranks 10th in the NFL by allowing just 221.8 yards passing a game, and he could have to do it without Cooks, who leads the team with 945 yards receiving.

KEY INJURIES: The Chargers had 11 players on the reserve/COVID-19 list, and LBs Joey Bosa and Chris Rumph have been ruled out for Sunday’s game because they are unvaccinated. RB Austin Ekeler, C Corey Linsley and CB Tevaughn Campbell are starters who are also on the list. ... Houston RB David Johnson missed practice this week with a quadriceps injury and is questionable for the game. ... S Justin Reid could return Sunday after missing the last game after a concussion. ... The Texans have 16 players on the COVID-19 list. Along with Cooks, K Ka’imi Fairbairn, starting DLs Jacob Martin and Jonathan Greenard and starting LBs Kamu Grugier-Hill and Christian Kirksey are also on the list.

SERIES NOTES: Houston has won two of the last three in the series after losing the first four matchups. ... The last four games in the series have been decided by eight points or less. ... These teams first met in 2002 in Houston’s first season. The Chargers won that game 24-3.

STATS AND STUFF: The Chargers' defense leads the league with 10 strip-sacks and is third with 17 forced fumbles. ... Los Angeles’ 138 fourth-quarter points are third in the league. ... RB Justin Jackson had a season-high 86 rushing yards last week. ... WR Keenan Allen has more than 1,000 yards receiving for the fifth time in six seasons and is the only receiver in the league with at least 90 catches in each of the past five seasons. ... WR Jalen Guyton has a touchdown in three straight games. ... WR Mike Williams needs 36 yards receiving to reach 1,000 for the second time in three years. ... S Derwin James is tied for third among defensive backs with 102 tackles. ... Houston RB David Johnson had 79 yards of offense in his only game against the Chargers in 2018. ... WR Phillip Dorsett had a season-high 43 yards receiving last week. ... Rookie LB Garret Wallow had a career-high 11 tackles and his first career sack last week. ... DE Derek Rivers had a career-best two tackles for loss and a sack last week. ... DE Chris Smith had his first sack of the season against Jacksonville. ... S Eric Murray had eight tackles last week. ... CB Tavierre Thomas had a career-best 11 tackles against the Jaguars. ... KR Tremon Smith was the AFC special teams player of the week after returning a kickoff 98 yards for a touchdown last week. It was the first kickoff return for a touchdown in his career and Houston’s first since 2009.

FANTASY TIP: Allen leads the Chargers with 1,007 yards receiving and has four 100-yard receiving games this season. He’s scored three of his five touchdowns in the last two games.