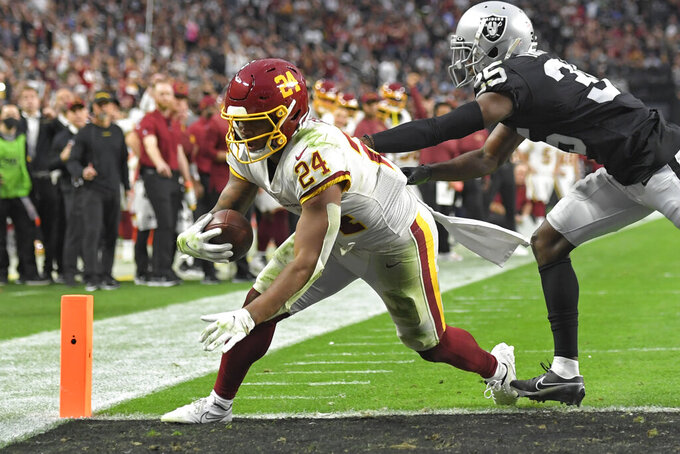 BETTING LINE: Chiefs by 9 1/2, according to FanDuel Sportsbook

TURNOVER DIFFERENTIAL: Raiders plus-1; Chiefs minus-5.

RAIDERS PLAYER TO WATCH: FS Johnathan Abram has been picked on repeatedly by the Chiefs in the three games he’s faced them. Patrick Mahomes completed all nine passes he threw in the first meeting with Abram in coverage and is 14 of 15 for 198 yards and three TDs in three meetings throwing against him.

CHIEFS PLAYER TO WATCH: DE Melvin Ingram had a half-sack and three tackles for loss last week against Denver. His ability to get pressure on Raiders quarterback Derek Carr would help out the defensive backfield, which got shredded when the teams met in Las Vegas.

KEY MATCHUP: Mahomes and the Kansas City passing attack against the Las Vegas secondary. Mahomes had another poor game last week against Denver, throwing for 184 yards with an interception and no TD passes. He'll try to bounce back against a Raiders pass defense that is allowing just over 230 yards per game.

SERIES NOTES: The Chiefs have won seven of the last eight in a series that began when the two teams were members of the AFL. The Raiders' only win since the 2017 season came in the first meeting last year, when Carr threw for 347 yards and three touchdowns in a 40-32 win. Mahomes threw for 406 yards with five touchdowns and no picks in a 41-14 win for Kansas City earlier this season.

STATS AND STUFF: The Chiefs lead the Chargers by one game and the Raiders and Broncos by two as they seek their sixth consecutive AFC West title. ... The Raiders have lost four of their last five games. ... Las Vegas has scored on only 50% of red-zone drives, tied for third worst in the NFL. ... Raiders WR Hunter Renfrow has topped 100 yards receiving in consecutive games for the second time in his career. ... Las Vegas is 6-0 when Carr throws for at least 300 yards and 0-6 when he doesn’t. ... The Raiders have been held to 16 points or fewer six times, their most through 12 games since 2014. Only Houston (seven) has been held that low more times. ... Raiders RB Josh Jacobs had a career-high nine catches last week but gained only 38 yards, the fewest yards in franchise history for a player with at least nine catches. ... Las Vegas ranks 30th in the NFL converting 33.8% of third downs. ... Raiders rookie CB Nate Hobbs had his first career INT last week. ... LB Perryman has at least 10 tackles in 10 of 12 games this season. ... Las Vegas ranks first in the NFL in gaining 6.38 yards per play on first downs. ... Kansas City was won five straight games, tied for the second-longest active streak in the NFL. ... The Chiefs are 14-3 against the Raiders since Andy Reid took over as coach. ... Reid needs one more victory to reach 100 overall with Kansas City. Marty Schottenheimer (101) and Hank Stram (124) are the only other coaches to reach that mark. ... Kansas City has held its opponents to 17 points or fewer each of the last five games. Six would tie for the fourth-longest streak in franchise history. ... Mahomes needs 73 yards passing to surpass Alex Smith (17,608) for third most in Chiefs history. He has thrown for at least 340 yards and two TDs in each of his last three games against Las Vegas. ... Chiefs TE Travis Kelce has caught a pass in 123 straight games. He needs 152 yards receiving to become the first tight end in NFL history with six consecutive 1,000-yard receiving seasons. ... WR Tyreek Hill needs 46 yards receiving to reach 1,000 for the season. It would be his fourth time reaching the mark, trailing only Kelce for most in Chiefs history. ... Hill needs one TD catch to pass Chris Burford (55) for third in franchise history. Two would tie Otis Taylor (57) for second. ... C Creed Humphrey and RG Trey Smith have started every game this season. They are trying to become the third pair of rookies to start every game, joining Sylvester Hicks and Art Still in 1978, and Brandon Carr and Glenn Dorsey in 2008. ... Chiefs SS Dan Sorenson had a 75-yard pick-6 last week against Denver.

FANTASY TIP: Hill and Kelce were shut down by Denver, combining for five catches and 47 yards receiving. But rarely do the two of them stay down for long, and you can bet Reid and Mahomes will make a concerted effort to get the two playmakers involved against Las Vegas. That means both could be poised for a big game.