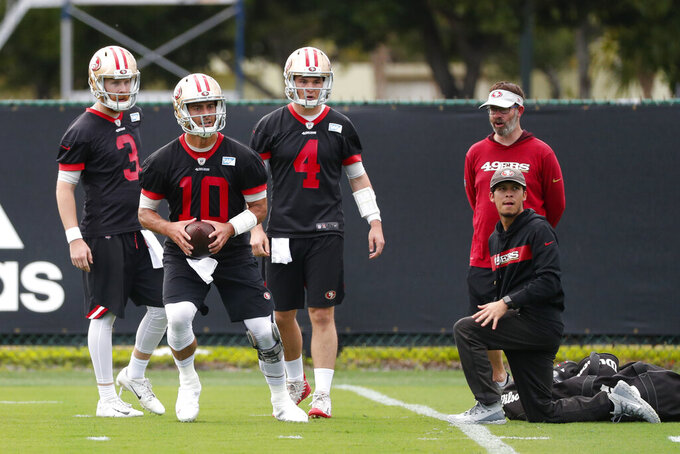 DAVIE, Fla. (AP) — Running back Tevin Coleman returned to practice Wednesday as the San Francisco 49ers began final preparations for the Super Bowl, while the Kansas City Chiefs had everyone on the field as they put the finishing touches on their game plan.

Coleman, who dislocated his shoulder in the NFC championship game, took handoffs during team drills during the 1-hour, 40-min workout at the University of Miami's practice facility. He looked to be in good spirits, too, slapping hands with his teammates and leaping after one play in particular.

"We'll see as the week goes how much the pain tolerance is for his shoulder," said 49ers coach Kyle Shanahan, who also has Matt Breida and breakout star Raheem Mostert at his disposal in the backfield.

Coleman was listed as limited on the injury list along with linebacker Kwon Alexander, who returned from a torn pectoral muscle in the playoffs, and safety Jaquiski Tartt, who has been dealing with sore ribs.

“They all got to go,” Shanahan said. "“I’m expecting them to be good by Sunday.”

The 49ers practiced in helmets and shells on the freshly resurfaced grass practice fields as they worked on first- and second-down installations, just as they would do during a normal Wednesday workout. The session included 11-on-11 team periods in which the offense and defense worked against scout team looks.

Meanwhile, the only injury concerns heading into the week for the Chiefs were defensive tackle Chris Jones, who was hobbled by a calf strain in the AFC title game, and tight end Travis Kelce, who has been dealing with a sore knee.

Chiefs coach Andy Reid said that Kelce was fine and that Jones was “good to go” after a 90-minute workout Wednesday.

Reid wanted to keep the week before the game relatively light, so the Chiefs installed virtually the entire game plan for Sunday night's game before they departed Kansas City. That allowed them to deal with the circus of opening night Monday and more media responsibilities Tuesday without worrying about putting things in place for the game.

“They loved it,” Reid told a pool reporter after the workout, which took place at the Miami Dolphins' practice facility under sunny skies and with temperatures hitting 80 degrees. “They got a little sunshine, so they loved it.”

There were several visitors to practice, including the Fox Sports crew that will broadcast the game Sunday night. Joe Buck and color analyst Troy Aikman were joined by sideline reporters Chris Myers and Erin Andrews, while the pregame crew of Curt Menefee, Michael Strahan and Jimmie Johnson watched the workout.

At the end of practice, Reid asked Johnson — recently voted into the Pro Football Hall of Fame — to speak to the team.

“I competed against him and always respected him,” Reid said.