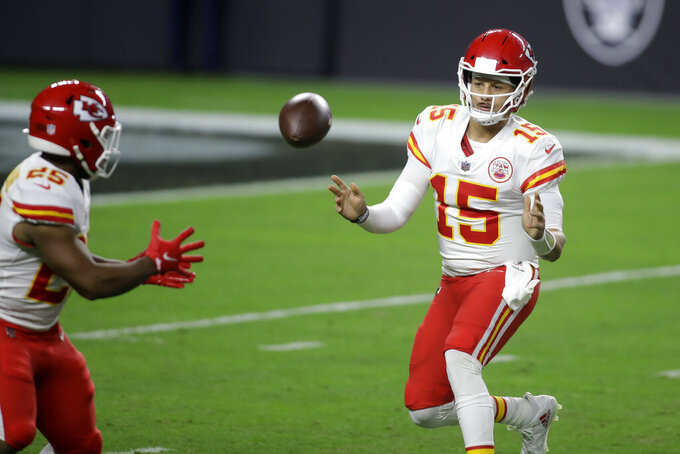 Kansas City Chiefs quarterback Patrick Mahomes (15) tosses the ball to running back Clyde Edwards-Helaire (25) during the first half of an NFL football game against the Las Vegas Raiders, Sunday, Nov. 22, 2020, in Las Vegas. (AP Photo/Isaac Brekken)

KANSAS CITY, Mo. (AP) — One of the biggest differences between the merely good and the exceptionally great is confidence.

The Kansas City Chiefs have plenty of it.

When the Raiders marched downfield for the go-ahead score late in Sunday's game in Las Vegas, and were poised to again serve as the kryptonite to the Super Bowl champions, there was never a bit of concern on the Kansas City sideline.

“I just didn't know if it was going to be overtime,” he said later, “or we were going to win it.”

They wound up winning it. Mahomes led a 75-yard drive that took up all of 75 seconds and capped it with a 22-yard throw to Travis Kelce wide open in the middle of the end zone. The touchdown gave the Chiefs a 35-31 lead with 28 seconds to go, and Daniel Sorensen's interception on the Raiders' next offensive play sealed a bit of revenge for the Chiefs' defeat to their longtime and bitter AFC West rivals last month at Arrowhead Stadium.

Not that it ever seemed to be in doubt to Mahomes — or his coach.

The first thought of Andy Reid after that Las Vegas touchdown: “I’ve got Pat Mahomes."

“You give me a minute and a half,” Reid added, "and I’m pretty good right there.”

The win pushed the Chiefs to 9-1 and gave them a stranglehold on the division race with six games to play. It also allowed them to stay within striking distance of the unbeaten Pittsburgh Steelers for the AFC's only first-round playoff bye, though none of those six games is a pushover. Tom Brady and the Tampa Bay Buccaneers are up next.

After relying almost exclusively on Mahomes' strong right arm the last couple weeks before their bye, the Chiefs got back to some offensive balance against the Raiders. He still threw 45 times for 348 yards and two scores, but Clyde Edwards-Helaire and LeVeon Bell led a ground gave that ran 27 times for 108 yards and three touchdowns.

The Chiefs' defensive line was ineffective all night. The Chiefs never sacked Derek Carr — heck, they only hit him once — and they allowed 89 yards and a touchdown on the ground. They also were major culprits when it came to penalties; Kansas City was flagged 10 times for 89 yards, including a couple on the Raiders' go-ahead fourth-quarter touchdown.

Wide receiver Demarcus Robinson stepped in nicely as the third target behind Kelce and Tyreek Hill, catching six passes for 44 yards. Sammy Watkins was out again with a hamstring injury and Mecole Hardman spent most of the week on the COVID-19 list, though he was finally cleared to play and had one catch for 16 yards.

Defensive back Bashaud Breeland was twice flagged for pass interference on the Raiders' fourth-quarter touchdown drive, though only one of them was accepted. He also was beaten on Nelson Agholor's TD catch early in the game.

The Chiefs remain without Watkins and right tackle Mitchell Schwartz, who has been dealing with a bad back. Wide receiver Byron Pringle left the game with an ankle injury but eventually returned to the field.

23 — Kelce finished with 127 yards receiving for his 23rd career 100-yard game. That is one back of Kellen Winslow for the third most among tight ends. Tony Gonzalez has the record with 31 and Rob Gronkowski is second with 28.

The Chiefs visit the Buccaneers on Sunday, then return home to face Denver. The regular season concludes with trips to Miami and New Orleans and home games against the Falcons and Chargers. The combined record of the next four opponents: 25-15.