Chiefs' success big reason why fans will be at Super Bowl 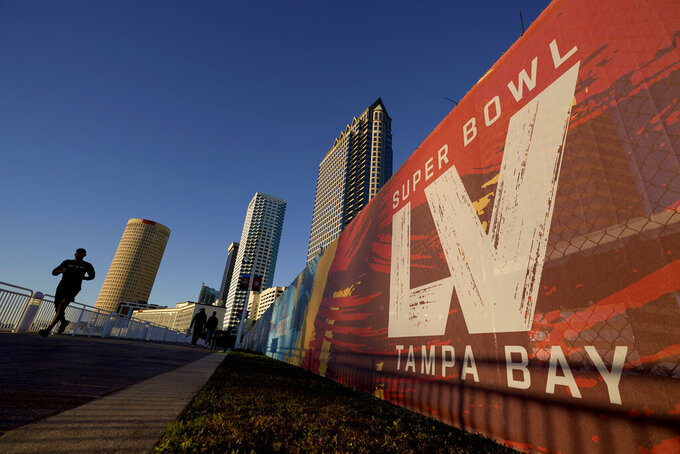 A man passes signage for Super Bowl 55 as he runs along the Hillsborough River on Wednesday, Feb. 3, 2021, in Tampa, Fla. The city is hosting Sunday's Super Bowl football game between the Tampa Bay Buccaneers and the Kansas City Chiefs. (AP Photo/Charlie Riedel)

There will be about 25,000 fans inside Raymond James Stadium for the Super Bowl on Sunday. One reason the Buccaneers and Chiefs won’t be playing before oceans of empty seats is Kansas City helped to prove it was possible to have folks in the stands.

The Chiefs hosted the Texans in the kickoff to the season. From the start, they followed a plan to allow 22% of capacity — approximately 17,000 fans — for each game at Arrowhead Stadium. Fans had to go through temperature checks; sit in small groups and pods; adhere to strict social-distancing measures; and wear facemasks whenever they weren’t eating or drinking.

Even when COVID-19 numbers were spiking around the country, the Chiefs never experienced an outbreak traced back to their fans. And as the season wore on, other teams began to follow their blueprint for allowing fans into their own stadiums.

Chiefs president Mark Donovan said they take tremendous pride in that as an organization.

Tampa Bay coach Bruce Arians wanted to make sure his Bucs are ready for something they haven’t dealt with much during this season played during a pandemic: noise.

The Bucs had 16,009 in the stands when they routed Atlanta 44-27 to wrap up the regular season. Approximately 25,000 fans will be allowed inside Raymond James Stadium on Sunday, so Arians pumped up the speakers during the Bucs’ 1-hour, 45-minute practice Thursday.

Arians said communication was easy with nearly empty stadiums during the regular season. He used the speakers before the NFC championship in Green Bay where Arians said it was very loud for his offense.

“I’m hoping there will be some crowd noise when we’re playing defense because our guys are used to talking to each other,″ Arians said. “They’ve talked to each other all year and now all of a sudden, they’ve got to use hand signals.”

Linebacker Jason Pierre-Paul was limited at practice Thursday after sitting out a sore knee Wednesday. Defensive tackle Steve McLendon was given the day off.

The Chiefs moved indoors in Kansas City because of snow and a temperature in the low 30s.

Thursday marked the final time talking to the media for the Bucs and Chiefs until after the Super Bowl.

Tom Brady's six Super Bowl rings don't protect him from being trash talked in his own home.

Asked by a reporter to say hi to his fans in Brazil if he knew any Portuguese, Brady praised his 10-year-old son and 8-year-old daughter for how fluent they are in the language. His wife, model Gisele Bundchen is from Brazil, so Portuguese is spoken regularly at home.

“Unfortunately, their dad is way behind and in his understanding of how to speak the language," Brady said. “But I can usually understand a lot of things my wife will say: Papai nao sabe de nada, which means Daddy doesn’t know anything. I usually get that a lot in the house.”

Brady may not be able to speak Portuguese as well as the rest of his family, but the Tampa Bay quarterback knows enough to understand most of what they're saying, especially when it's about him.

“I know when they’re speaking Portuguese, kind of what they’re saying, even if they’re, you know, taking shots at their dad ...,” Brady said. “Sometimes when I use my Portuguese words, my daughter will be like, ‘Daddy, you spoke Portuguese’ which is pretty great. So she’s very fluent.”

There will almost certainly be a moment Sunday when Tyrann Mathieu, the ball-hawking All-Pro safety for the Chiefs, bears down on bruising Buccaneers running back Leonard Fournette and tries to make a tackle.

The fact that it will happen in the Super Bowl? Mathieu called it a “bucket list” moment for both of them.

You see, long before they became NFL stars, or even standouts at LSU, they were making plays for St. Augustine High School in New Orleans. Mathieu was a couple years ahead of Fournette, so they never really played together, but he always kept his eye on the next football prodigy coming out of the all-boys parochial high school.

“It’s great to see him having some success and be in the situation. It’s great for both of us,” Mathieu said. “Growing up in New Orleans, it teaches you a lot not only as a person but the person who you want to become in the future. The different teachers and coaches we had, they were really hands on, and that put is in the mindset to dream big and work hard.”

Tight end Cameron Brate was already a well-established player, but like many of his Tampa Bay teammates he was a bit star struck by their new quarterback when Tom Brady picked the Bucs.

The first text greeting he received from Brady prompted him to vet the number with wide receiver Chris Godwin, to make sure the message was actually from the three-time NFL MVP and six-time Super Bowl champion. Brate, Godwin and wide receiver Scotty Miller eventually got together for a throwing session at a local high school on a summer Saturday.

“I just remember being so nervous the night before, just to go out and catch passes, just routes on air, something I’d done a million times, just because he’s Tom Brady, you know? He just makes everyone feel very comfortable, made us all feel very comfortable right away,” Brate said.

“It’s just been a ton of fun getting to know him and being his teammate and being part of his legacy. Hopefully I can help add one more championship this year to his ring total.”

Philadelphia Eagles fans have helped raise more than $260,000 for the Eagles Autism Foundation through the cutouts taking the place of fans who couldn’t attend during the pandemic.

Ryan Hammond, executive director of the Eagles Autism Foundation, said Thursday that 4,900 cutouts were bought by Eagles fans from around the world, and the response helped the autism foundation top the $10 million mark over its first three years.

“While we couldn’t celebrate in person this year, we were all together in spirit thanks to this fun and creative program that truly represented the very best of Eagles fans everywhere,” Hammond said.

Most NFL teams gave fans the opportunity to buy cutouts for games, with most of the money going to team foundations for their charities.

Philadelphia’s cutouts included healthcare workers and fans such as actor Morris Chestnut, Diplo, DJ Jazzy Jeff, Savannah Guthrie, soccer star Carli Lloyd, actor Ryan Phillippe and others. Fans were able to pick up their cutouts at the end of the season.

Todd Bowles Jr. was one of 10 February recruits to join the Scarlet Knights and Greg Schiano, who coincidently coached the Bucs for the 2012 and ’13 seasons. The linebacker from Jesuit High School in Tampa has ties to New Jersey from the time his father was coach of the New York Jets (2015-18).

By Andrew Seligman 51 minutes ago
By Mitch Stacy 2 hrs ago
By Dennis Waszak Jr. 15 hrs ago
16 hrs ago
By Kyle Hightower 16 hrs ago