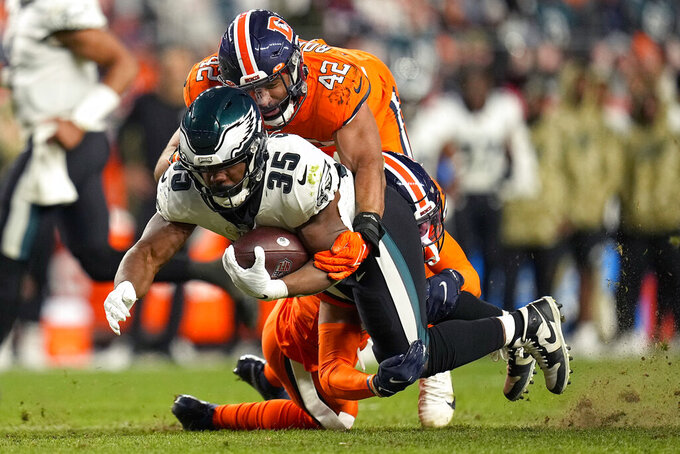 Philadelphia Eagles running back Boston Scott (35) is tackled by Denver Broncos linebacker Curtis Robinson (42) during the second half of an NFL football game, Sunday, Nov. 14, 2021, in Denver. (AP Photo/Jack Dempsey)

Committing to the run has made the Philadelphia Eagles a better team.

The Eagles rushed for 214 yards in a convincing 30-13 win at Denver on Sunday. They’ve surpassed 175 yards rushing three straight games, including 200-plus in both of their victories.

“We just want to do what we think is best for us to win each football game and that always starts with what you think you do well first,” coach Nick Sirianni said Monday. “And then it goes into the team’s scheme that you're playing and their players. We’ve known we’ve had a good offensive line the whole time. We’ve always wanted to get the run game going to help Jalen (Hurts) be more successful as a quarterback, because that takes some of the pressure off him.”

The schedule is favorable for Philadelphia the rest of the way. The Eagles don’t have to fly again in the regular season. Their last three road games are train rides away to New York and Washington. The combined record of their remaining opponents is 26-37.

The return to running has coincided with the loss of top back Miles Sanders. It’s allowed Hurts to flourish. The second-year pro had an excellent first half against the Broncos before the Eagles used the run game to milk the clock in the second half.

The Eagles are now the No. 1 rushing team in the NFC. Jordan Howard and Boston Scott have been productive in Sanders’ absence and the offensive line is able to dominate the line of scrimmage on run plays.

The run defense allowed 5.3 yards per carry on 18 attempts by the Broncos, who had to throw the ball most of the second half after falling behind by double digits.

Hurts has been improving steadily. Over the past three games, he leads all quarterbacks with 186 yards rushing and is second with a 102.6 passer rating.

Defensive end Derek Barnett had two penalties, including roughing the passer. He also had a sack. He has six penalties and two sacks this season.

The Eagles host the Saints on Sunday. Hurts made his first career start against them last year, leading Philadelphia to a 24-21 upset win.