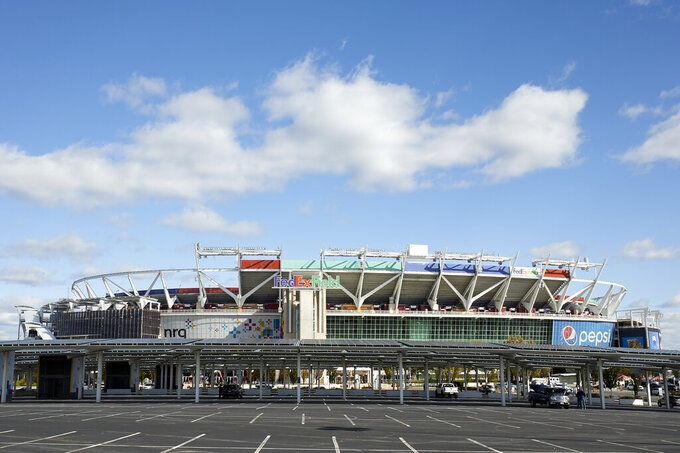 FILE - This Oct. 21, 2018 photo shows a general view of FedEx Field in Landover, Md. To encourage the Washington Commanders to stay in Maryland, the Maryland House approved a measure on Wednesday, April 5, 2022, to spend $400 million to develop the area around FedEx Field in the suburbs of the nation's capital, but it does not include money for a new stadium for the NFL team. (AP Photo/Mark Tenally, file)

WASHINGTON (AP) — The U.S. House Committee on Oversight and Reform sent a letter to the Federal Trade Commission on Tuesday saying the Washington Commanders engaged in potentially unlawful financial conduct, and the NFL plans to look into the most serious allegations.

The committee found evidence of deceptive business practice over the span of more than a decade, including withholding ticket revenue from visiting teams and refundable deposits from fans.

In the letter obtained by The Associated Press, the committee outlined through the testimony of former employees and access to emails and documents a pattern of financial impropriety by owner Dan Snyder and team executives. At one point in 2016, the committee said the team retained up to $5 million from 2,000 season-ticket holders while also concealing sharable revenue from the league.

An NFL spokesman said the league has engaged former Securities and Exchange Commission chair Mary Jo White “to review the most serious matters raised by the committee.” She chaired the SEC from 2013-17.

One former employee testified before Congress saying the team had two separate financial books: one with underreported ticket revenue that went to the NFL and the full, complete picture. According to testimony, Snyder was aware of the numbers shared with the league while also being privy to the actual data.

The business practice was known as “juice” inside Washington's front office. And, if correct, it could spell significant trouble for Snyder and the Commanders.

Ticket revenue is shared among all 32 NFL teams, with 40% of it deposited in a visiting team fund. Such money is among the pillars of the league’s revenue-sharing commitment.

A team spokeswoman said there was no new comment and referred to the statement from March 31: “The team categorically denies any suggestion of financial impropriety of any kind at any time.”

"We adhere to strict internal processes that are consistent with industry and accounting standards, are audited annually by a globally respected independent auditing firm, and are also subject to regular audits by the NFL. We continue to cooperate fully with the Committee’s work.”

The House Oversight Committee said it is sharing documents with the FTC because the commission has the authority to investigate unfair or deceptive business practices and determine if any laws were broken.

“We request that you take any other action you deem necessary to ensure that all funds are returned to their rightful owners and that those responsible are held accountable for their conduct,” said the letter signed by committee chairwoman Carolyn B. Maloney and economic and consumer policy subcommittee chairman Raja Krishnamoorthi.

The letter is addressed to FTC chair Lina M. Khan but was also sent to the attorneys general of Maryland, Virginia and the District of Columbia, and NFL Commissioner Roger Goodell.

Congress launched an investigation into the team's workplace misconduct after the league did not release a report detailing the findings of an independent probe into the matter. The committee said the NFL and the team “have taken steps to withhold key documents and information.”

An NFL spokesman said the league continues to cooperate and has provided more than 210,000 pages of documents.

Investigators' inability to get all the information they wanted led them to seek testimony and documents in other ways. The committee said its investigation uncovered everything from “pervasive sexual harassment and other workplace misconduct to potential financial misconduct."

According to testimony, financial misconduct included making it intentionally difficult for season-ticket holders to recoup refundable deposit money, counting some of those leftover funds as a different kind of revenue that doesn't need to be shared with the league, and shifting money from ticket sales for NFL games to other events at FedEx Field as a way of hiding that money from the league.

The committee in the letter shared spreadsheet data showing evidence of deposits that were not returned. Citing emails and the testimony of longtime vice president of sales and customer service Jason Friedman, ticket sales from Washington games were shifted to a 2013 Kenny Chesney concert and a 2014 Navy-Notre Dame college football game as a way to “juice” revenue and keep it off the books shared with the NFL.

When word first surfaced in early April about the team withholding ticket revenue, the team released a statement denying that report and added: “Anyone who offered testimony suggesting a withholding of revenue has committed perjury, plain and simple.” Lawyer Lisa Banks, who represents Friedman, said the team defamed her client, who testified truthfully “with evidence.”

After the committee sent the letter to the FTC, Banks and lawyer Debra Katz, who represent more than 40 former employees, called it “damning.”

“It’s clear that the team’s misconduct goes well beyond the sexual harassment and abuse of employees already documented and has also impacted the bottom line of the NFL, other NFL owners, and the team’s fans,” they said in a statement. “We are proud of our many clients who have come forward at great personal risk to reveal the truth and bring us closer to total transparency about the full extent of the dysfunction at the Washington Commanders.”