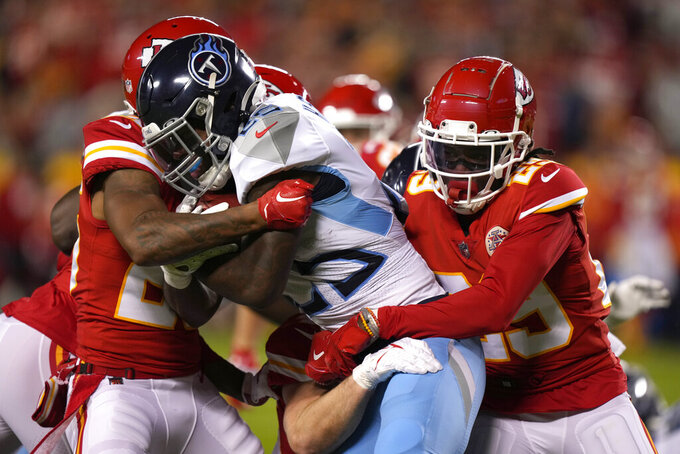 LAS VEGAS (AP) — A judge has pushed back court dates in a felony assault case involving New Orleans Saints running back Alvin Kamara, Kansas City Chiefs cornerback Chris Lammons and two other men accused of severely beating a man at a Las Vegas nightclub the weekend of the 2022 Pro Bowl.

The adjusted timeline for the case likely precludes either player from being punished by the NFL this season.

Traditionally, the league has waited until the legal process plays out before fining or suspending players.

The two other defendants are Darrin Young and Percy Harris. All four have been free on bond, allowing Kamara and Lammons to play this season.

Police have said video evidence shows Kamara put his hand on alleged victim Darnell Greene Jr.'s chest to stop him from stepping toward the elevator early Feb. 5 at the rooftop Drai’s nightclub. The man pushed Kamara’s hand away and Lammons punched the man, authorities have said.

The man fell unconscious on the floor and the defendants allegedly stomped on his face, chest and legs, leaving him with facial fractures and injuries to his head, knees and arms.

Kamara played in the Feb. 6 Pro Bowl before he was arrested. Lammons turned himself in several days later. Young and Harris were arrested Feb. 14.

Kamara also faces a civil lawsuit filed by Greene in New Orleans which seeks $10 million in damages and a jury trial.

The lawsuit includes stills from surveillance footage at the the hotel and casino, as well as a photo of Greene after the beating and details from the police report.

Greene, of Houston, is represented by the Buzbee Law Firm, which also was involved in the numerous lawsuits against Browns quarterback Deshaun Watson, and the New Orleans-based firm Garner & Munoz.