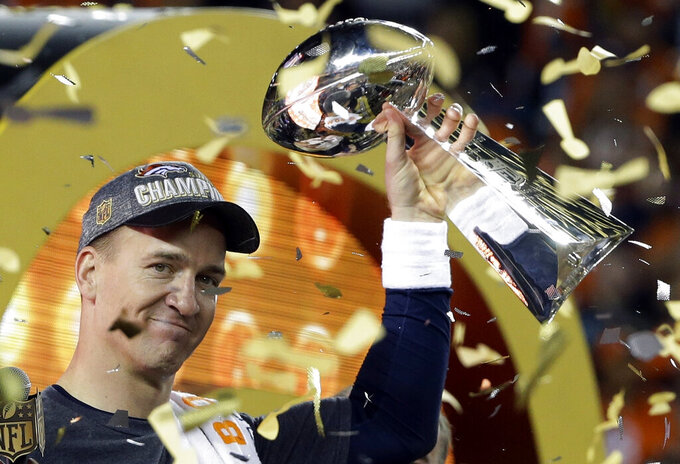 FILE - In this Feb. 7, 2016, file photo, Denver Broncos quarterback Peyton Manning holds up the Vince Lombardi Trophy after the Broncos defeated the Carolina Panthers 24-10 in NFL football's Super Bowl 50 in Santa Clara, Calif. Manning's legacy lives on at Empower Field at Mile High, where he will be honored Sunday, Nov. 1, 2021, during pregame and halftime ceremonies for his inductions into the Pro Football Hall of Fame and the Broncos' Ring of Fame.Fame and the Broncos' Ring of Fame. (AP Photo/Julie Jacobson, File)

ENGLEWOOD, Colo. (AP) — The Denver Broncos haven't had much success since Peyton Manning retired a month after becoming the first starting quarterback to win Super Bowls with two different teams.

But his legacy lives on at Empower Field at Mile High, where Manning will be honored Sunday during pregame and halftime ceremonies for his inductions into the Pro Football Hall of Fame and the Broncos' Ring of Fame.

“I don’t really know what type of leader I would be without Peyton and having that example of what leadership and what greatness looks like every single day," said franchise sacks leader Von Miller, one of two Broncos who won Super Bowl 50 with Manning (kicker Brandon McManus is the other).

Miller said he's been fortunate to play with a wide array of locker room leaders and “Peyton Manning is definitely at the top of that list.”

Broncos coach Vic Fangio and Manning go way back, even before Fangio arrived in Indianapolis as the Colts defensive coordinator a year after Manning's rookie year.

“I’ve known Peyton since he was 13 or 14 years old. He used to come over to the Saints’ facility when I was a coach there," said Fangio, who kicked off his 35-year NFL coaching career tutoring the Saints linebackers from 1986-94.

“In the offseason back then, there was no such thing as OTAs, but if you had enough guys around, you’d go out and throw it around and have a ‘skelly’ maybe with what you had,” Fangio said. “There were days when we had no quarterbacks or one quarterback, and we’d have Peyton in there throwing to our pro players.”

Fangio and Manning reunited in 1999, when they helped turn a 3-13 team in Manning's first year into a 13-3 team, kicking off a 12-year run in which the Colts averaged 11½ victories per season.

“I’ve always had fun with Peyton,” Fangio said. "We liked to tease each other when we were on the same team. Obviously, he’s quarterbacking the offense, and I was running the defense. We’d have our little bickering and friendly battles back and forth. We weren’t friendly in the moment, but quickly became friendly.

"I’ve played golf with him several times. He’s just a great guy. Obviously, everybody knows about his football exploits, but he’s a great person. I feel honored to be able to call him a friend.”

Miller was hard pressed to name his favorite memory of playing alongside Manning from 2012-15 when the Broncos won 55 games, two AFC championships and the franchise's third Super Bowl title.

One thing that stuck out, Miller said, was this: Manning was all in all the time.

“He took this job seriously. He had purpose and intent when he came into the facility every day. It wasn’t just a 9-5,” Miller said. "You can tell that this was everything to him and he put everything into it. That’s something that I want to continue to do in my career and share with all of my teammates.”

Manning's run in Indy came to an end in 2012 after he missed the entire 2011 season following neck fusion surgeries and the Colts drafted Andrew Luck with the No. 1 pick, and John Elway lured Manning to Denver for the second chapter of his storied career.

On the eve of his induction into Canton last summer, Manning reflected on that move, saying the Broncos "were the only team that said, ‘Hey, Peyton, give us your Indianapolis Colts playbook, we will form this hybrid offense with the plays that we like here in Denver, that we think will help you at this point of your career, we’ll form this mesh of an offense and really give you a chance to get back going again.’ And not every other team was doing that.

“So, I’ll always be indebted to Denver for (John) Fox, (John) Elway, (Mike) McCoy, (Adam) Gase for just kind of helping me in that transition and just had a wonderful four years playing there,” Manning added.

Manning still lives in Denver and is seen as a potential face of an ownership group if the team is sold in 2022.

“I have a great relationship with Indianapolis and still very involved there in the community, just like I am in Knoxville and New Orleans,” Manning said. "But you can only live in once place and Denver’s just been a great place to live and I’ve enjoyed being a part of the community and really couldn’t have made a better decision to go out there and play back in 2012.”