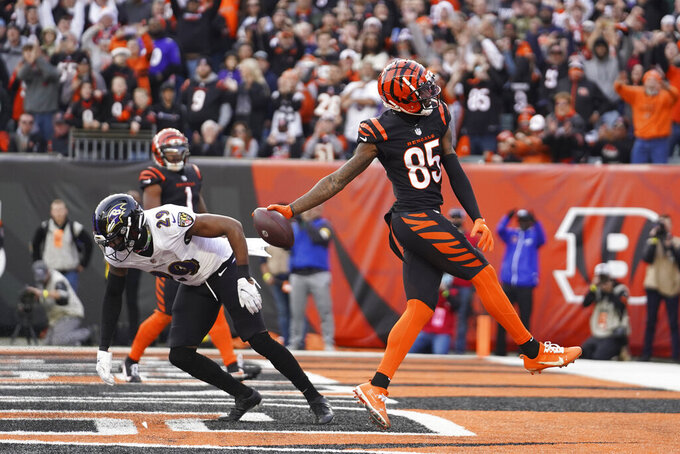 Cincinnati Bengals' Tee Higgins (85) celebrates a touchdown reception during the second half of an NFL football game against the Baltimore Ravens, Sunday, Dec. 26, 2021, in Cincinnati. (AP Photo/Jeff Dean)

The Baltimore Ravens have remained competitive all season despite injuries that have decimated the roster.

Against Cincinnati, it finally looked like one team's backups trying to stop another team's stars.

The Ravens were helpless against a Cincinnati team that was never once forced to punt. After losing its previous three games by a combined four points, Baltimore was beaten decisively Sunday, 41-21 in a matchup that put the Bengals a game ahead of the Ravens atop the AFC North.

Baltimore (8-7) is still very much in the mix for a postseason spot, but this was the first time in a while that the Ravens weren't even in the game in the final minutes.

In fact, their only loss more lopsided than this was also against Cincinnati, 41-17 on Oct. 24.

“Disappointed, but you can't afford to be deflated,” Ravens coach John Harbaugh said Monday. “There's just no time for that. I know our guys are in a good spot that way. They understand that. They believe it. They know it's a tough fight."

The big story entering the game was that Baltimore was without its top two quarterbacks. Lamar Jackson missed a second straight game with an ankle injury, and Tyler Huntley was on the reserve/COVID-19 list. That left Josh Johnson, who had been with the Ravens less than two weeks, as the starter.

Johnson, however, played fine. The bigger problem was a secondary that has struggled this season and was completely depleted Sunday. Cornerbacks Marlon Humphrey and Marcus Peters are on injured reserve, along with safety DeShon Elliott. Cornerbacks Jimmy Smith and Chris Westry were on the COVID-19 list, along with safety Geno Stone.

“When your name is called, go and do what you’re asked to do,” said Baltimore safety Tony Jefferson, a practice squad call-up who played a majority of the defensive snaps Sunday.

“Go execute the defense. I was excited for the opportunity just to be out there and have the ability to go play with the guys. It’s been a while — getting that many amount of snaps.”

On Monday, Jefferson went on the COVID-19 list. Smith and linebacker Pernell McPhee were activated from it.

The Ravens have been able to execute their offense at a satisfactory level even with backup quarterbacks. They scored 30 points in a loss to Green Bay two weekends ago with Huntley, and then Johnson threw for 304 yards Sunday.

“We have everybody we need, and now we need to go out there and play our best football that we’re capable of playing, and that’ll be enough,” Harbaugh said. “So, we have enough, and it will be enough. We’ve just got to go do it. We’ve got to focus on that.”

Some of Baltimore's injured players aren't coming back this season, but a few activations from the COVID-19 list could help in the short term — especially in the beleaguered defensive backfield.

It's hard to believe tight end Mark Andrews' stock could rise any higher, but what he's done this season really is remarkable given the injuries around him. With Baltimore starting a third different quarterback in three weeks, Andrews caught eight passes for 125 yards and a touchdown.

Baltimore's division title hopes took a clear hit. It's not just that the Ravens are a game behind Cincinnati. They would also lose a head-to-head tiebreaker with the Bengals.

On top of all the other problems in the secondary, cornerback Anthony Averett is now dealing with rib issues.

As for the quarterbacks, Harbaugh did seem to indicate Jackson and Huntley have a chance to return soon.

941 — The number of yards Burrow threw for in two games against the Ravens this season.

Baltimore faces another imposing passing attack next weekend when the Ravens host the Los Angeles Rams. Cooper Kupp of the Rams has 132 receptions for 1,734 yards on the season.