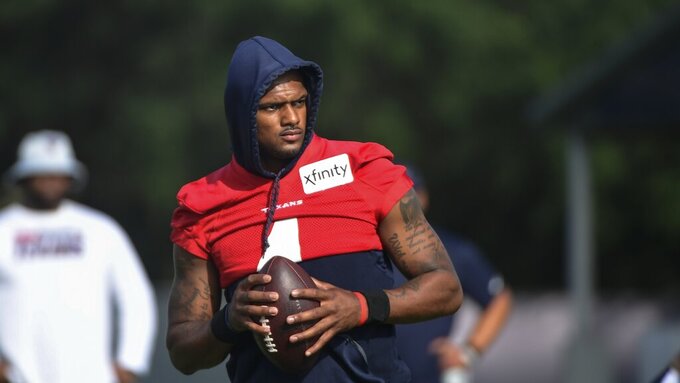 Texans quarterback Deshaun Watson (4) practices with the team during NFL football practice, Aug. 2, 2021, in Houston. Watson's complicated past didn't dissuade the Cleveland Browns from betting on the quarterback's future. He's on Cleveland's roster, and at this point that's the only certainty with the talented yet controversial QB. Watson's stunning trade to the Browns became official Sunday, March 20, 2022 capping a whirlwind few days during in which the three-time Pro Bowler — accused by 22 women of sexual harassment or assault — agreed to come to Cleveland after initially telling the team he wouldn't. (AP Photo/Justin Rex)

Deshaun Watson's complicated past didn't dissuade the Cleveland Browns from betting on the quarterback's future.

He is on Cleveland's roster, and at this point that is the only certainty with the talented yet controversial QB.

Watson's stunning trade to the Browns became official Sunday, capping a whirlwind few days during in which the three-time Pro Bowler — accused by 22 women of sexual harassment or assault — agreed to come to Cleveland after initially telling the team he wouldn't.

The Browns are taking heat for bringing in Watson with his legal baggage, but the team feels comfortable with its decision.

“We spent a tremendous amount of time exploring and investigating the opportunity to trade for Deshaun Watson," Browns owners Dee and Jimmy Haslam said in a team news release. "We are acutely aware and empathetic to the highly personal sentiments expressed about this decision. Our team’s comprehensive evaluation process was of utmost importance due to the sensitive nature of his situation and the complex factors involved.

“We also understand there are still some legal proceedings that are ongoing and we will respect due process.”

Desperate to win, the Browns have gone all in for Watson, sending first-round picks the next three seasons to Houston along with a 2023 third-rounder and 2024 fourth-rounder. The Texans will part with Watson and a 2024 fifth-round pick.

Last week, the Haslams flew to Houston with general manager Andrew Berry and coach Kevin Stefanski and met with Watson to discuss his situation and future. The 26-year-old was also courted by Atlanta, Carolina and New Orleans.

The Browns came away satisfied with Watson's character.

“He was humble, sincere and candid,” the Haslams said. "In our conversations, Deshaun detailed his commitment to leading our team; he understands and embraces the hard work needed to build his name both in the community and on the field. ... We are confident in Deshaun and excited about moving forward with him as our quarterback and supporting his genuine and determined efforts.”

It’s still not known when Watson will be in Cleveland, where fans have been debating the trade for days. The Browns are still working on plans for a possible news conference.

Now that the trade is complete, Watson and the Browns are facing tough questions about their new partnership.

For the Browns, he brings hope along with criticism.

While they become an instant possible Super Bowl contender following another disappointing season, the Browns are also being condemned for taking a player with ongoing legal issues. Nearly two dozen female massage therapists have alleged he assaulted them during rehab sessions.

A grand jury in Texas recently declined to indict Watson on criminal charges, but the civil cases are pending — as is his return to the field.

Watson may face disciplinary action by the NFL, which is conducting an independent investigation about his behavior. Based on precedent, the league could suspend him multiple games for violating its personal conduct policy.

Watson's arrival has also ended Baker Mayfield's tumultuous four-year stay as the Browns' starter. The former No. 1 overall pick asked to be traded last week after learning of Cleveland's pursuit of Watson and will get his wish.

Indianapolis, Seattle and New Orleans are all possible landing spots for Mayfield.

Although Mayfield had a rough 2021 season after injuring his left shoulder in Week 2, the Browns had publicly stated they expected him to come back as their starter this year before deciding to pursue Watson.

As far as the football in concerned, Watson is a major upgrade. He's believed to be one of the league's elite QBs despite not playing last season after requesting a trade. He led the league with 4,823 yards passing in 2020 with 33 touchdown passes.

The Browns have completely overhauled their quarterback situation.

Cleveland acquired Watson and has agreed to sign free agent Jacoby Brissett, a former starter in Indianapolis, as his backup. The Browns also agreed to trade veteran backup Case Keenum to the Buffalo Bills on Saturday.

And now that they have their quarterback, the Browns are also trying to re-sign free agent defensive end Jadeveon Clowney, who played two seasons with Watson in Houston. Clowney had a solid 2021 with the Browns after signing a one-year deal with them.