Diggs' trade to Bills paid off for Vikes, too, as teams meet 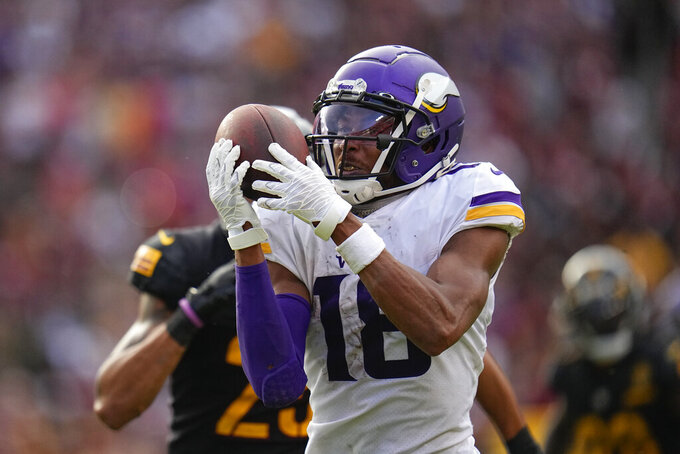 Minnesota Vikings wide receiver Justin Jefferson (18) makes a catch for a long pass against the Washington Commanders during the second half of an NFL football game, Sunday, Nov. 6, 2022, in Landover, Md. (AP Photo/Julio Cortez)

ORCHARD PARK, N.Y. (AP) — Justin Jefferson would’ve caught Stefon Diggs’ attention even if the Buffalo Bills receiver didn’t have a direct connection to how the Minnesota Vikings landed their star player in the first round of the 2020 draft.

The ties between two of the NFL’s most productive receivers over the past three years go even deeper with the AFC-leading Bills (6-2) hosting the NFC North-leading Vikings (7-1) on Sunday.

By trading Diggs to Buffalo in March 2020, the Vikings acquired a first-round pick (No. 22), which they used to draft Jefferson in a deal that has panned out for both teams.

In Buffalo, the instant connection Diggs established with starter Josh Allen set the foundation of one of the league’s most potent offenses, which powered the Bills to winning two consecutive AFC East titles.

In Minnesota, the Vikings finally appear to have found a winning complementary mix on offense and defense under first-year coach Kevin O’Connell after missing the playoffs the past two years, and with Jefferson playing a key role. He’s again leading the Vikings in yards receiving with 867 to rank second in the NFL — 10 ahead of Diggs.

Jefferson has a mutual appreciation for Diggs.

“I just love the way he carries himself. ... He wants to be out there making plays for his team, and I can't argue that,” Jefferson said. “I got to talk to him more after we (were) traded, and got to really know each other. I definitely love him as a person and respect his game, and only want the best for him.”

The matchup between two of the NFL’s top teams at the halfway point of the season features several other subplots.

The Vikings face questions of whether they’ve taken advantage of a soft schedule. Of their seven wins, only one has come against a team currently with a winning record, Miami (6-3).

In the meantime, no one on either team is second-guessing the Diggs' trade.

“I think Stefon felt that he was wanting a different opportunity, and I think his production in Buffalo would suggest that’s worked out very well for him. It was tough to lose him,” Vikings quarterback Kirk Cousins said. “But being able to get Justin sort of made it sting a little less with the way Justin’s played.”

Diggs benefitted personally, with the trade freeing him from a run-first offense in Minnesota, where he felt overlooked playing a secondary role. The new surroundings and warm welcome in Buffalo provided him a new perspective on life and his role on a team.

The once-mercurial player, who at times sulked after losses in Minnesota, made a concerted effort to be more even-keeled in Buffalo.

“I took my lumps in Minnesota,” Diggs said, noting he now has a different perspective on his five-year stint with the Vikings.

“I had a great time in Minnesota. I didn’t have any bad taste in my mouth. ... It just didn’t work out,” he added. “But I feel like this was part of my plan, the plan God had for me. And my maturation process is that a lot of good things have happened to me since.”

The Vikings have a knack for winning in the clutch, with four of their victories secured by go-ahead scores with 2:30 or less remaining in regulation. That includes their 20-17 win over Washington last week, in which the Vikes rallied from a 10-point deficit to win on Greg Joseph’s 28-yard field goal with 12 seconds left.

If Allen can’t play, the Bills will turn their offense over to 10-year journeyman Case Keenum, whose best season came in 2017 when he went 11-3 with Minnesota.

“Yes and no,” Keenum said, on whether there’s anything more personally in potentially facing Minnesota. “I’ve played a lot of my former teams before, that’s what happens when you have a lot of former teams.”

Should Allen miss another week, Keenum's in line to face yet another former team, Cleveland. Buffalo acquired Keenum in a trade with the Browns in March.

Vikings running back Dalvin Cook flashed a wide smile when asked if he's engaged in familial trash talk with his brother, Bills running back James Cook.

The sixth-year Vikings star never played on a team with his younger sibling, a rookie who was a second-round draft pick out of Georgia. And now the rest of the Cook family must divide its loyalties.

"It’s a fun time for my family, but it’s something that I will remember forever,” Dalvin Cook said.