Dolphins are in the hunt for first division title since 2008 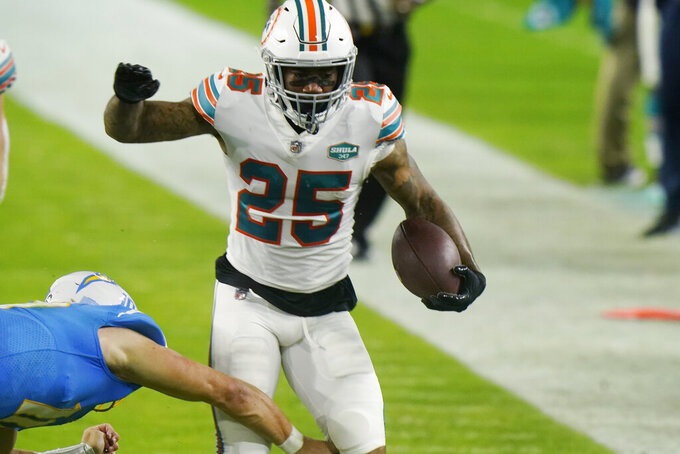 Miami Dolphins cornerback Xavien Howard (25) runs after intercepting a pass during the second half of an NFL football game against the Los Angeles Chargers, Sunday, Nov. 15, 2020, in Miami Gardens, Fla. (AP Photo/Lynne Sladky)

MIAMI (AP) — The Miami Dolphins' relentless defense keeps coming, and even the Buffalo Bills are feeling the heat.

Miami has blitzed its way to five consecutive victories to cut Buffalo's lead atop the AFC East to one-half game. The Dolphins are 6-3, their best nine-game record since 2001, and have already exceeded their 2019 win total.

The dramatic turnaround under second-year coach Brian Flores has Miami in contention for its first division title since 2008. The Bills fell to 7-3 Sunday when they lost to Arizona on a Hail Mary.

“We’re in the hunt,” Dolphins center Ted Karras said. "We've got to keep executing and winning games and doing what we’re doing.”

A 29-21 win Sunday over the Los Angeles Chargers followed a formula that is becoming familiar. The Dolphins took an early lead, allowing Flores to dial up blitz packages that kept the Chargers and Justin Herbert on their heels.

“Their pressure was getting to us,” Chargers coach Anthony Lynn said.

Emmanuel Ogbah had a full sack for the sixth game in a row, and defensive back Nik Needham became the 10th Miami player with a sack this year. Xavien Howard made his fifth interception of the season on a harried throw, and he and Byron Jones helped limit the Chargers' two best wideouts to 77 yards on 12 targets.

“We take pride in is being aggressive and getting to the quarterback,” linebacker Andrew Van Ginkel said. "When you have DBs back there that can cover, it makes it a lot easier to do that. That’s what this defense has taken its pride in, and it’s something that we’re going to continue to do.”

The Dolphins have a takeaway in 16 consecutive games, the longest streak in the NFL. And while their defense and special teams force mistakes, rookie Tua Tagovailoa continues to avoid them. He joined Philadelphia’s Carson Wentz as the only quarterbacks in the Super Bowl era to win their first three career starts while not throwing an interception.

Monday was the first anniversary of Tagovailoa's hip injury that ended his Alabama career.

DeVante Parker was targeted seven times against the Chargers and had just two catches for 31 yards. Miami's top receiving threat has totaled 14 catches in the past five games.

NFL punt return leader Jakeem Grant had his first receiving touchdown of the year and led the team with four catches for 43 yards.

Veteran running back Jordan Howard was released Monday. He signed a $9.75 million, two-year deal last offseason to join the Dolphins but gained only 33 yards on 28 carries and was inactive Sunday.

“This was a mutual parting,” Flores said. “Given the circumstances, Jordan handled himself professionally. He was the consummate pro. There were no issues. We just felt this was in best interest for both parties.”

With two other rushers injured, undrafted rookie Salvon Ahmed made his first career start and carried 21 times for 85 yards and a score. But the Dolphins still rank last in the league with an average of 3.6 yards per carry.

LB Kyle Van Noy (hip) sat out much of the game before returning in the second half. Miami was without DT Christian Wilkins and four assistant coaches because of COVID-19 protocols.

On Sunday, Miami plays at Denver (3-6) for the first time since 2014. The next three opponents — Broncos, Jets and Bengals -- are combined 5-21-1, and those games could propel the Dolphins toward a showdown at Buffalo in Week 17.