Eagles grounded by own mistakes against Giants, 4 turnovers 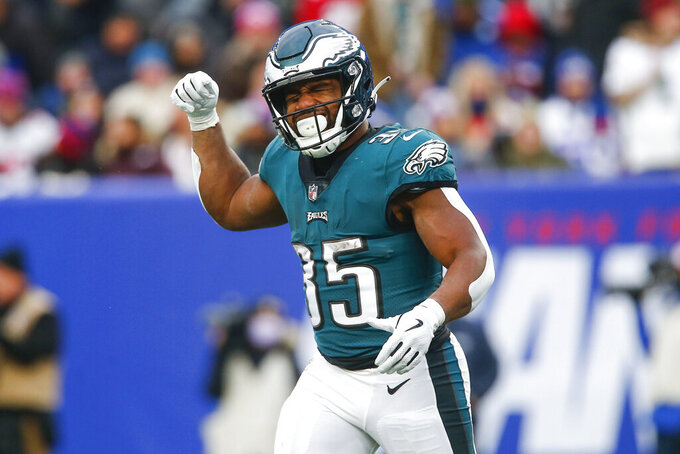 Philadelphia Eagles' Boston Scott reacts after his touchdown during the second half of an NFL football game against the New York Giants, Sunday, Nov. 28, 2021, in East Rutherford, N.J. (AP Photo/John Munson) 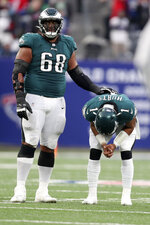 EAST RUTHERFORD, N.J. (AP) — The Philadelphia Eagles seemingly had everything in front of them after winning two straight and three of the last four.

They were back in the playoff hunt and had a schedule that featured only one game against a team with a winning record. The path to the postseason was there — until the Eagles (5-7) self destructed against a Giants team coming off a bad Monday night loss to Tampa Bay that led to the firing of offensive coordinator Jason Garrett.

Jalen Hurts threw three interceptions, Boston Scott lost a fumble in Giants territory with 1:34 to play, and Jalen Reagor could not come up with two seemingly catchable passes near the goal line in the waning seconds as New York stunned Philadelphia 13-7 on Sunday.

“You can’t turn the ball over four times and expect to win,” rookie head coach Nick Sirianni said. "Lose the turnover battle 4-0. Nothing good is going to come.

Philadelphia did win some things. It outgained New York 332-264, including 208-70 on the ground, with Hurts gaining a team-high 77 yards. It had more first downs and a better third-down percentage. His mistakes, though, were decisive.

Trailing 3-0, the Eagles drove from their 26 to the Giants 20 in the first quarter and were faced with a third-and-5. Hurts' pass over the middle to Quez Watkins was intercepted by Darnay Holmes at the 5.

With the score the same late in the second quarter, Hurts led a 15-play drive from his 7 to the Giants 1 with :08 left in the half. On third down, he rolled to his right, was put under pressure and was intercepted by Tae Crowder at the goal line.

“Obviously he didn’t play good enough,” Sirianni said of Hurts, who was 14 of 31 for 129 yards. “And we didn’t coach good enough. It’s all of us. It’s just never one guy. We’re going to look through that tape and we’re going to have to make those corrections.”

Safety Xavier McKinney got New York's third interception midway through the third quarter, shortly after the Giants went ahead 10-0 on a 1-yard pass from Daniel Jones to tight end Chris Myarick, a Philadelphia native who was making his first career catch.

“It would have been just as sweet against any team, said Myarick, who played at Temple. ”I mean, I didn’t really put too much being from Philly and growing up in Philly, I really didn’t put too much of that going into this game."

The Eagles closed the Giants' lead to 10-7 on a 1-yard run on the first play of the fourth quarter by Boston Scott, somewhat of a Giants nemesis with seven career TDs against them. However, Scott also lost a fumble at the Giants 45 and Julian Love recovered. After New York went three-and-out, the Eagles got the ball back and moved from their 41 to the Giants 27.

Hurts had deep shots on second and fourth down to Reagor near the end zone, but the receiver could not haul in the passes.

“Just two drops that I would say that are very uncharacteristic, but I just have to go through the highs and the lows and go to the next week and make those plays,” Reagor said.

Hurts took the blame for the interceptions and said he clearly cost the team points at the end of the half.

“Good, bad or indifferent, everybody is going to hold themselves accountable for it — the things that they did and the things that they didn’t do,” Hurt said. “I know as the quarterback of this team, it’s who I am. I put this team in a bad situation in the first I half. I put us in a very bad situation, and very close to digging ourselves out of it, but it wasn’t enough.”

Linebacker T.J. Edwards said the Eagles did not let recent success get to their heads.

“I think confidence at times is a good thing,” Edwards said. “We’re frustrated with where we’re at right now. So, no one is high on their horse whatsoever. I think right now we just want to continue to know that we are a good football team and that we can play with anybody. We can compete and we can win. I think as long as we keep that, there’s nothing wrong with keeping that attitude.”

Sent from my iPad and was