Elway bolsters his offense for a change, including QB 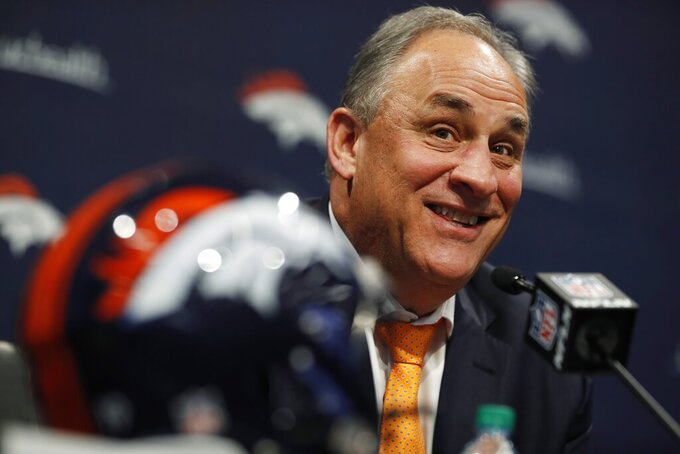 ENGLEWOOD, Colo. (AP) — After entering the offseason scrambling again at quarterback, John Elway emerged from draft weekend set for the present and maybe the future at a position that's been his Frankenstein ever since Peyton Manning retired three years ago.

Drew Lock will be Joe Flacco's understudy — providing he can beat out Boise State QB Brett Rypien, who was among the undrafted players Denver signed after the draft concluded, for the backup job.

Lock, the second-round pick from Missouri will take a wait-and-watch approach like reigning NFL MVP Patrick Mahomes did for a year behind Alex Smith in Kansas City, or even like Aaron Rodgers did for three seasons behind Brett Favre in Green Bay.

By taking Lock with the 42nd pick and immediately declaring him Flacco's apprentice, the Broncos are dodging the kind of QB competition that blew up on them two straight summers with 2016 first-round bust Paxton Lynch.

"I think it will certainly take pressure off him and it will allow him to sit and learn," Lock's father, Andy, a restaurateur from Kansas City, told The Associated Press on Saturday. "And also I think from an organizational standpoint, maybe the Broncos don't feel as much pressure to get him on the field early.

"It's a great recipe, and I'm excited for that."

So is his son, who realizes he has a lot to learn as a pro.

"I think I'm just going to take it day by day here," Lock said, declining to declare any timetable for taking over as the starter. "I'm going to try to be the best teammate possible because I know if there's one thing to help win over a team and win over a locker room, it's come in and just be a good teammate.

"Then I think I'll gain the respect and the trust of everybody in that locker room" like Mahomes did in K.C. and Rodgers did in Green Bay.

Lock was hoping to be a first-round selection but said he knows deep down his landing spot was much more important than his draft slot.

"Obviously, you'd like to get picked a little earlier, but I'm here," Lock said. "We got Dalton (Risner) because of it, we got Noah (Fant) because of it, and if that's the way it was supposed to be, then so be it. I'm a Bronco now and I couldn't be more excited to be here."

Elway said he saw the draft as another step in his makeover of the Broncos, which has included the hiring of Fangio, acquisition of Flacco and free agent signings such as Ja'wuan James and Kareem Jackson.

Elway said Fant and Risner should start right away and with "Drew coming in and competing for the backup spot, he gives us some depth there."

"So, we feel much better where we're sitting here now today than we did coming out of last season."

Elway didn't consider drafting a QB in the first round, but he traded with Cincinnati to move up to 42nd and select Lock 32 spots — a full round — after many projections had him going. Elway also pulled a stunner by taking Winfree , who started just seven games in college, missed the 2016 season with a torn ACL and sat out four games last year with a sprained ankle.

Elway filled a major need by drafting Fant in the first round. Fant clocked a 4.5-second 40-yard time at the NFL scouting combine, faster than 17 wide receivers. In Hollins, they're hoping they landed the ILB who could help the Broncos smother opposing tight ends like George Kittle who burned them for 210 yards and a TD in the first half of a game last season that essentially ended their slim playoff hopes.

Addressing CB Chris Harris Jr.'s request for a hefty pay raise. The 30-year-old star is due $7.8 million in 2019, about half of what cornerbacks of his caliber are making. Harris is skipping the offseason program while Fangio installs his new defense and recently issued a pay-me-or-trade-me request after what he felt were disrespectful comments by Elway, who has a history of playing hardball with his stars.