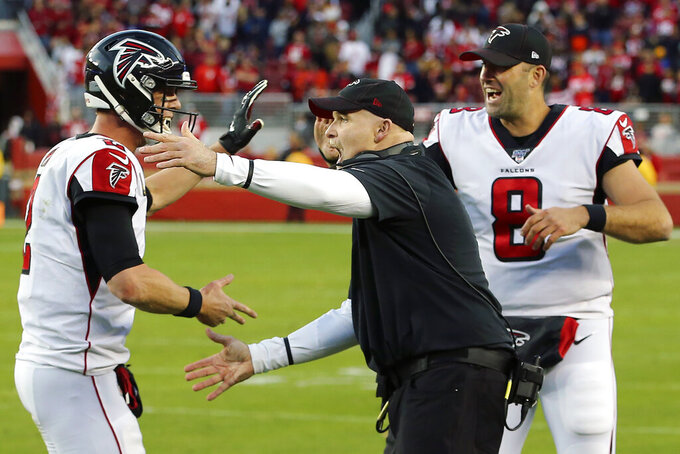 ATLANTA (AP) — Wrapping up another disappointing season but buoyed by a strong finish, the Atlanta Falcons announced Friday they are keeping coach Dan Quinn in 2020.

Owner Arthur Blank also decided to retain general manager Thomas Dimitroff for next season, though there will be organizational changes that restore President and CEO Rich McKay to a more prominent role in football operations.

In another change, Quinn will give up the dual role as defensive coordinator that he took on this year. Raheem Morris will get the job, hardly a surprise after he switched to the defensive staff at midseason and sparked a major turnaround.

In the end, the longtime Falcons owner chose stability even with the Falcons assured of their second straight losing season.

"It's about winning games, winning championships, winning rings" Blank said. “My belief is this group, this leadership group, this coaching group, can get us there more quickly than any other approach we could've taken.”

Blank made the decision before the Falcons (6-9) head to Tampa Bay for the season finale Sunday, removing Atlanta from the list of teams that might be heading for a coaching change.

“This has been the hardest, most invaluable year for me as a coach — ever,” Quinn said. “I've made mistakes, and we get to fix them."

Perhaps the most surprising development was McKay reclaiming a major role on the football side.

A former general manager with both the Falcons and the Buccaneers, McKay was bumped upstairs when Dimitroff was hired as GM in 2008. Since then, McKay has largely concentrated on business operations, most notably heading up the development of the team's new retractable-roof stadium, which opened in 2017.

His appearances in Flowery Branch were rare.

Now, Quinn and Dimitroff will report directly to McKay, with Blank retaining oversight of football operations. McKay will become the direct conduit to the owner on all football-related matters.

“It doesn't seem strange to me,” Blank said. “He's extraordinarily connected to the sport and to the NFL and what's going on. Getting the stadium built required a lot of his time, but his knowledge of the NFL is as current today as it has been for the last 25 years.”

McKay stressed that Quinn and Dimitroff will continue to make the personnel decisions, with the coach retaining the final say over the 53-man roster.

But McKay agreed to Blank's request that he become a visible presence at the Falcons training complex, which means he'll be on hand at least four days a week to work with Quinn and Dimitroff.

“They will still make decisions," McKay said. "I'm charged with the job of making sure our processes work and make sure I give them the support they need.”

Quinn clearly saved his job with a 5-2 record over the second half of the season, including the current three-game winning streak.

Just as important was how the Falcons turned things around after a 1-7 start.

Quinn agreed to major changes during a midseason bye week with the team mired in a six-game losing streak, notably shifting Morris from receivers coach to a role overseeing the secondary and assisting with defensive play-calling.

“I recognize when there's a problem," Quinn said. “I'm not someone to sit back on my hands and not do something about it.”

The Falcons also simplified their defensive scheme and moved some players into different positions where they have been more effective.

“I looked at a coach who was willing to be very reflective and has a lot of humility about himself and about his own decision-making,” Blank said. “I give him tremendous credit for doing that.”

Quinn has a record of 42-37 as he completes his fifth season as Atlanta's coach. During the 2016 season, he led the team to only the second Super Bowl appearance in franchise history, where the Falcons infamously squandered a 28-3 lead in the second half before losing to the New England Patriots in overtime.

Atlanta made another playoff appearance in 2017, reaching the divisional round of the NFC playoffs before losing to the eventual Super Bowl champion Philadelphia Eagles.

But the team has slumped to losing marks the last two seasons, plagued by injuries and questionable personnel moves, leading to thousands of empty seats at $1.5 billion Mercedes-Benz Stadium.

Blank said bluntly that poor coaching was a major cause of the team's problems in the first half of the season. He also criticized Quinn for dragging his feet on making needed changes.

“He probably should have made some of these changes sooner,” Blank said. “I think the second half of the season is great and gives us a trail we can follow as we look into next year, but after you're 1-7, it's a little bit late. The music has kind of stopped playing."

Quinn fired all three coordinators after last season and took over the defense himself, hoping his hands-on presence would lead to major improvement. The move backfired, but the team has shown significant improvement on defense since Morris moved to that side of the line. As part of the switch, Quinn largely ceded the defensive play-calling duties to Morris and linebackers coach Jeff Ulbrich.

The Falcons, who were 31st in points allowed after Week 8, have ranked in the top 10 in most statistical categories over the last seven games.

No decision was announced on other possible staff changes, though Quinn said he intends to bring back offensive coordinator Dirk Koetter.

The decision to keep Quinn was praised in the locker room.

“We stuck together as a team and kept fighting,” safety Ricardo Allen said. “I'm grateful coach Quinn is coming back. That's what I've been fighting for. Even when you don't have very much to fight for in the season and you know you're not going to the playoffs, you don't want the head man gone.”