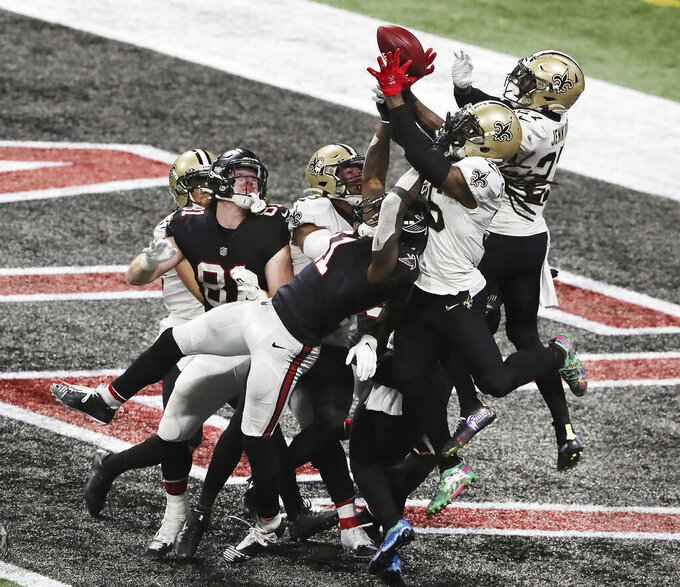 “Koo has been money, but I'd like to see less of him,” Morris, the Atlanta Falcons interim coach, said Monday.

Morris has grown tired of seeing Koo jog onto the field after the Falcons' offense has been stopped short of the end zone.

Just as they have far too often this season, the Falcons leaned too heavily on Koo's field goals in Sunday's 21-16 loss to the New Orleans Saints. Koo kicked a combined six field goals in two losses to the Saints in the last three weeks, including three on Sunday. He's made 24 consecutive field goals since Week 4.

If only Morris could rely on the Falcons' offense the way he can trust Koo. Atlanta was held to only one touchdown in the two games against the Saints, including a 24-9 loss in New Orleans on Nov. 22.

“We are too good to only have one touchdown against them,” wide receiver Julio Jones said Sunday.

The belief the offensive talent is better than the production has led to increased criticism aimed at coordinator Dirk Koetter.

When asked on Monday if Atlanta made enough changes on offense following the first loss to the Saints, Morris said “I’d be telling you a story if I said we made the necessary adjustments and you lose.”

Added Morris: “I have to tell you right now we didn’t do enough to win on offense ... and I’d have to say that across the board because we didn’t win it.”

The Falcons rushed for only 70 yards. Todd Gurley lost 7 yards on a crucial third-down run from the Saints 12 with less than two minutes remaining.

The Falcons have touchdowns in only 50% of their red-zone possessions this season, good for only 29th of 32 teams. The red-zone woes are a big reason the Falcons (4-8) would have to win their final four games to avoid their third consecutive losing season.

Morris again will look for answers as Atlanta plays at the Los Angeles Chargers next Sunday.

Koetter said different factors have contributed to the difficulties near the goal line.

The Falcons' depth at wide receiver is impressive when all are healthy. Calvin Ridley made a clutch 27-yard catch late in the game to keep Atlanta's comeback hopes alive. Ridley had five catches for 108 yards and Jones added 94 yards on a team-high six catches. Russell Gage had four catches, including the team's only touchdown, a 10-yarder.

Tight end Hayden Hurst has at least four catches in six of his last eight games. The two exceptions came against the Saints, including Sunday when he had only one catch for 9 yards on four targets. After having three touchdown catches in his first five games with Atlanta, Hurst has not scored in six consecutive games.

Defensive end Steven Means had a career-high two sacks and forced a fumble as the defense provided a comeback opportunity. Linebacker Foye Oluokun continued his breakout season with 13 tackles, one shy of his career high.

Gurley played a season-low 22 snaps and had only nine touches, including season-low totals of eight carries for 16 yards. Gurley was on the injury report with a knee problem before being cleared for the game. Morris acknowledged Gurley is being used “situationally.” In this case it meant the running back’s primary usage came late in the game.

Safety Riccardo Allen left in the second half with a concussion. Defensive end Jacob Tuioti-Mariner suffered a neck injury late in the game.

1 - The Falcons' red-zone woes continue as they managed only one touchdown in four possessions inside the Saints 20.

The Falcons will play the Chargers in Los Angeles on Sunday. They return for their final home game against Tampa Bay on Dec. 20 before closing with games at Kansas City and at the Buccaneers.