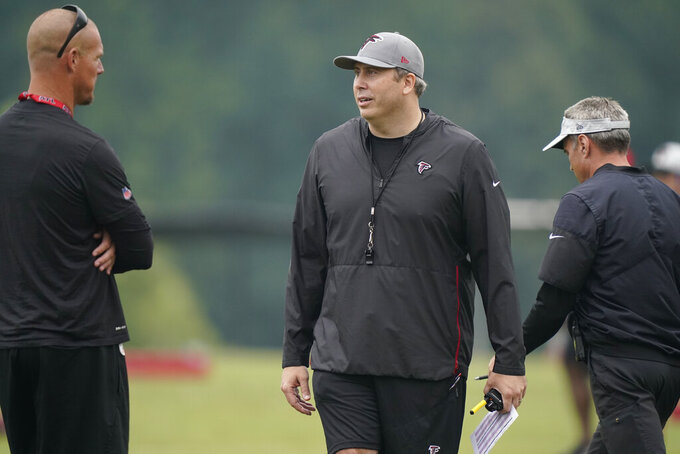 There may be more big-play opportunities for the Atlanta Falcons' middle linebacker in new defensive coordinator Dean Pees' scheme this season. Pees has a reputation for creating blitz opportunities in his multiple packages.

Jones is eager to build on last season's success in rushing the passer.

“I like to do it all,” Jones said Wednesday. “I love to get after the quarterback. That was something new I got to do and I loved it.”

“I think last year was just another taste of something I can do,” Jones said, crediting “a little more pass rush” opportunities.

"From here on, just whenever the opportunity comes up, just hone into it and take it serious, like I did last year,” he said.

The bad news for Atlanta: Jones' 4 1/2 sacks led the Falcons, who finished 4-12 for their third consecutive losing season. The team's 29 sacks were evidence of a weak pass rush that ranks near the top of first-year coach Arthur Smith's long list of areas that need improvement.

One of Smith's most notable moves in preparing for his first camp was bringing the 71-year-old Pees, who most recently was Tennessee's defensive coordinator in 2018-19, out of retirement.

Jones said Pees has made a strong first impression.

“It’s been good. Real hands on with everything, making sure we get an understanding of the defense.”

The Falcons need to see an edge rusher such as Dante Fowler Jr., who had only three sacks last season, lead the pass rush. Fowler opened training camp on the reserve/COVID-19 list after having his contract restructured in the offseason.

For now, the strength of the defense is at linebacker, where Foye Oluokun joins Jones to form an established tandem. Oluokun led Atlanta with 116 total stops and added three sacks and two interceptions. Jones had 106 tackles.

Oluokun said he and Jones provide different strengths to the defense.

“As long as we’re communicating with each other, we’re learning how to take our shots and make plays.”

A rare encouraging sign for the defense last season came when Oluokun and outside linebacker Jacob Tuioti-Mariner won NFC defensive player of the week honors in a span of four weeks.

Jones ranks with defensive tackle Grady Jarrett and cornerback A.J. Terrell as the most established starters.

“He is playing multiple roles,” Smith said of Jones. “He’s doing a nice job of handling every position we’ve asked him to because we’re going to be a multiple defense.”

NOTES: TE Jaeden Graham was placed on the injured reserve list after hurting his right knee in practice Wednesday. Graham had three catches for 25 yards while playing in all 16 games in 2020. ... The team signed WR Trevor Davis, a fifth-round draft pick by Green Bay in 2016. Davis also has spent time with the Raiders, Dolphins, Bears and Washington.