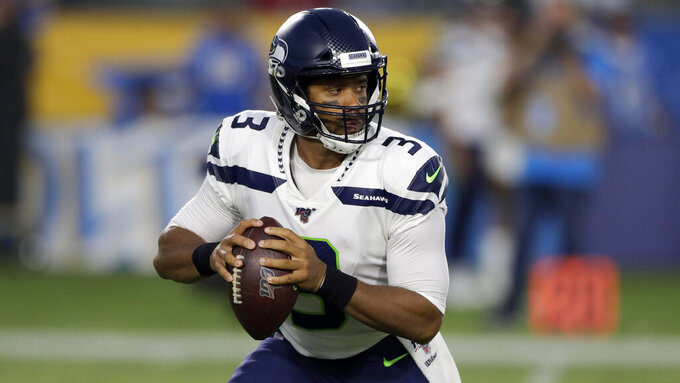 The NFL's 100th season is about to begin.

Every fantasy football team is 0-0, filled with optimism about the teams they've drafted. Daily fantasy players are peering through every stat in hopes of being the next big-money winner at one of the popular sites.

The new season is just about here, but the Week 1 Start/Sit begins now.

START: Russell Wilson, QB, Seahawks: Wilson begins the season at home against a Bengals team that ranked 29th in fantasy points allowed per game to opposing quarterbacks. The addition of rookie WR D.K. Metcalf gives Wilson an ideal option when he chooses to dial it up. Wilson was second in the league with a 46.7% completion rate when throwing the deep ball.

SIT: Matt Ryan, QB, Falcons: Atlanta worked hard in the offseason to upgrade an offensive line that ranked 25th in protection rate. Ryan was sacked 42 times last season and opens the season on the road against a Vikings defense that finished third in fantasy points allowed to opposing passers.

START: Kerryon Johnson, RB, Lions: The second-year pro, considered a potential fantasy breakout, opens the season against the worst run defense in fantasy football. Opposing teams averaged 136.4 yards and 1.3 touchdowns per game in 2018 against Arizona, along with a near 80% completion rate allowed to running backs.

SIT: Duke Johnson, RB, Texans: Carlos Hyde will cut into his carries, plus the Saints were fourth in fewest fantasy points allowed per game to opposing backs, giving up just 17.15 per game. Despite leading the league with 7.1 yards per touch last season, Johnson will be limited behind a Texans line that remains suspect even with the addition of LT Laremy Tunsil from the Dolphins last weekend.

START: Dede Westbrook, WR, Jaguars: No team allowed more receiving yards last season than the Chiefs. Westbrook accounted for 27.1% of the team's receiving yards and touchdowns in 2018, a number that could zoom up with the addition of quarterback Nick Foles. The third-year wideout is primed for a huge season, and facing KC's secondary is a splendid springboard to begin on.

START: Evan Engram, TE, Giants: Engram averaged 80 yards per game in the final four weeks of 2018 and will see his target share of 16.9% climb up now that he will be featured in the offense. The Cowboys will have fits containing Engram once he has the ball, as he ranked third among all TEs with 377 yards after the catch.

SIT: David Njoku, TE, Browns: Only Jarvis Landry had a higher team target share than Njoku's 16.9% last season, but Njkou had a disappointing 63.6% catch rate and was nearly invisible (inside the red zone with only eight targets). Not only does Njkou have to contend with a Titans defense that ranked third in fewest fantasy points per game to opposing TEs, but he also has to jockey for targets now that Odell Beckham Jr. is in the lineup.

START: Courtland Sutton, WR, Broncos: Sutton has good upside as a possible WR3/Flex going against a Raiders defense that allowed 30.26 fantasy points per game to opposing receivers last season. His 16.8 yards per catch ranked 11th among receivers, yet what makes Sutton intriguing is that only seven other receivers had a higher end zone target rate than Sutton's 39.8% last season. Entering his second season, Sutton has the potential to help quarterback Joe Flacco along with becoming a go-to target in Denver's passing game.

SIT: Dak Prescott, QB, Cowboys: Any hopes of Prescott becoming more pass happy ended early Wednesday morning when RB Ezekiel Elliott agreed on a six-year, $90 million contract extension. The Cowboys were just 19th in pass plays (36.4 per game) last season, and that number will likely hold up now that Dallas now has its workhorse in the backfield.

START: Case Keenum, QB, Redskins: For all the Super Bowl hype surrounding the Eagles, the same secondary that ranked 30th in fantasy points allowed to opposing receivers returns. Keenum will likely be playing catch-up, so it wouldn't be surprising if he went north of 40 passes, which means he could rack up a solid yardage total along with a couple of touchdowns.

SIT: Kallen Ballage, RB: Dolphins: The second-year back has potential but must deal with a Ravens defense that was second only to the Bears in fewest fantasy points allowed to opposing running backs. Ballage will have to share touches with Kenyan Drake, plus he's a strong candidate for having the defensive line stacked. Defenses averaged 6.3 players at the line when Ballage was in the backfield last season, and with a mediocre passing game, Ballage's "flex" appeal is greatly stunted.

SIT: Tyler Boyd, WR, Bengals: Boyd is now the WR1 in Cincinnati now that A.J. Green is out for an extended period. The Seahawks were a modest 17th in pass defense last season, but were 10th in fewest fantasy points allowed to opposing quarterbacks. If Andy Dalton is struggling, that means Boyd is as well.