On Football: Changing cultures a part of new coach's job 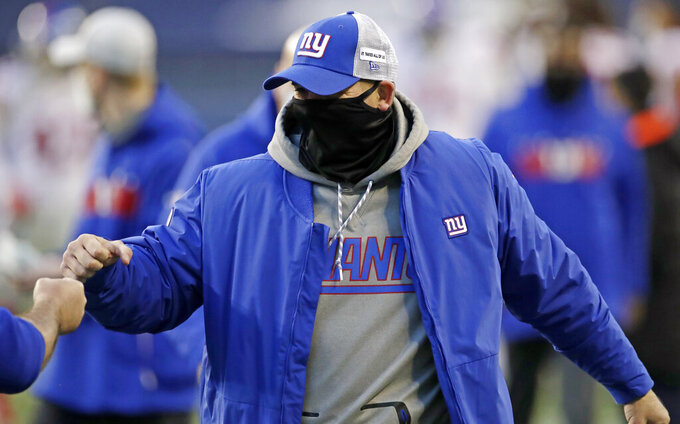 FILE - In this Dec. 6, 2020, file photo, New York Giants head coach Joe Judge is greeted after an NFL football game against the Seattle Seahawks in Seattle. The Giants started 0-5 and now are leading the NFC East. More significantly, they have made progress everywhere. Of particular note is the accountability Judge and his staff brought. Such culpability was decidedly absent almost since Tom Coughlin left. (AP Photo/Larry Maurer, File)

There's more than the X's and O's to consider when hiring a new head coach in the NFL.

Changing a culture and establishing a healthier one is a prime consideration. Four of the five teams that brought in new leaders for 2020 seem to have made the correct moves.

The one flop has been in Dallas, where not only have the Cowboys collapsed on the field and in the standings, but appear to have regressed to the very early 2000s when America's Team was more America's Joke.

The outlook is much brighter for the Browns, Giants, Panthers and in Washington. And those franchises started from a much lower level, with both Carolina and Washington going through off-field scandals in recent years.

“The No. 1 thing a new coach has to do, regardless if the culture has been great or not, is put your stamp on the team and set the identity of the team,” Hall of Fame coach Tony Dungy says. "That is so much more important than the X's and O's; you can't get caught up in what to do on the field, to me that is so far down the line.

“A lot of the players had never been on a winning team, so it becomes how are we going to do this? What kind of people are we going to have? I remember telling (general manager) Rich McKay we have to have teachers, and that is who I want to have on my staff. The guys who do the hands-on instruction have to be great teachers. They came to me with Lovie Smith and Rod Marinelli, and of course I knew Herman Edwards."

Suggesting the Giants, Washington, Carolina or Cleveland are ready to contend for a championship is a stretch. But the fact the spotlight is on their revivals, not on their dysfunction, is a credit to each head coach.

The mess for a franchise that finally dropped a nickname considered racist also has included harassment claims from former club employees and reporters, and a battle over minority ownership stakes. Those are beyond Ron Rivera's reach, but as he recalled about a phone call just after he was fired by the Panthers last December with Washington team owner Daniel Snyder, Rivera's charge was more than what happens between the sidelines.

Yes, Washington is only 5-7, but Rivera's approach is working everywhere — and in a pandemic-impacted year, no less.

The Giants started 0-5 and now are leading the NFC East. More significantly, they have made progress everywhere. Of particular note is the accountability Joe Judge and his staff brought. Such culpability was decidedly absent almost since Tom Coughlin left.

Offensive line coach Marc Colombo was fired for voicing displeasure over Judge’s decision to hire Dave DeGuglielmo as a consultant. First-round draft pick Andrew Thomas showed up late for a meeting the night before a game and didn't start. Golden Tate mugged for cameras and complained about a lack of targets and was benched the next week.

“I think the accountability to your teammates — and that’s coach to coach, coach to player, player to player, player to coach — we all have to be accountable to one another,” Judge says, “and that’s in how we work, in how we prepare and that’s in whatever the result of our preparation is. Don’t make any excuses, just call it what it is, be honest with each other. If we’re transparent and we’re honest, we can all go ahead and improve and move on.”

Matt Rhule built a winner at Temple, then re-energized a Baylor program that was scandal-ridden. He came to a Panthers team in rebuilding mode, and while they're just 4-8, probably their two best players — RB Christian McCaffrey and DL Kawann Short — have been injured.

Yet the Panthers have been competitive and energetic.

“Those other places were different situations,” Rhule said, "but the one thing we did was battled and improved. I am proud of these guys, I see an improvement in them. There are so many guys we had slated to go and then other guys had to step up. There's guys that when we started training camp weren't even on the roster that are playing significant amounts of reps for us. So I like that part of who we are and what we're building.

"Sometimes you are not winning, so you think it's not working, but it's working, you are just not winning yet. And if you keep doing it, it will continue to work and work."

With the Browns, it's all about stability. Since re-entering the NFL in 1999, they seemingly have hired new coaches annually. They even brought back Hue Jackson after he went 0-16.

A steady demeanor, openness and disciplinary ways have marked Kevin Stefanski as perhaps, finally, the right man. He's taken a roster of varied personalities and, so far, melded them into a successful unit.