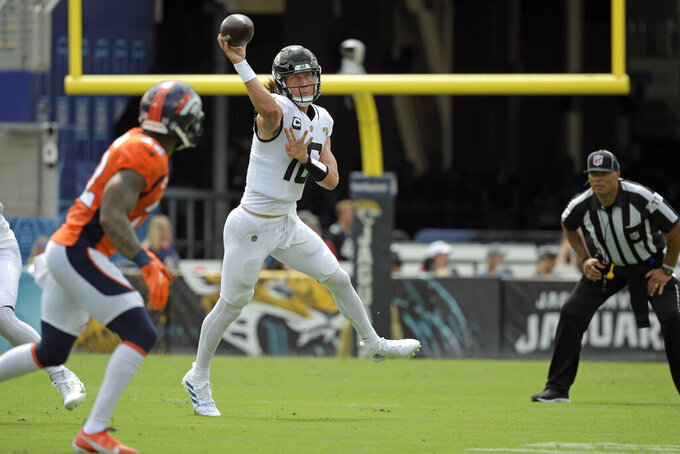 OPENING LINE: Cardinals by 7 1/2, according to FanDuel SportsBook

TURNOVER DIFFERENTIAL: Cardinals even; Jaguars minus-5.

CARDINALS PLAYER TO WATCH: Former Houston WR DeAndre Hopkins put up big numbers against the Jaguars when he played them twice a year in the AFC South. He has 79 receptions for 930 yards and six touchdowns in 14 games against Jacksonville. He also won 10 of his last 12 games against the Jags.

JAGUARS PLAYER TO WATCH: Rookie CB Tyson Campbell could be in for his most significant workload because starter CJ Henderson (groin) is banged-up and veteran Tre Herndon (knee) is still recovering from a training camp injury.

KEY MATCHUP: Cardinals dynamic QB Kyler Murray versus Jacksonville’s porous defense that is still looking to create its first turnover. Murray has thrown for 689 yards and seven touchdowns, with three interceptions. He also has run for two scores. The Jaguars have struggled to generate steady pressure and been a passing sieve, giving up nearly 300 yards a game through the air to Tyrod Taylor and Teddy Bridgewater.

SERIES NOTES: Arizona has won three straight against Jacksonville, including a 27-24 victory four years ago in which former Jaguars QB Blaine Gabbert earned a win against his former team. … The losing team has failed to top 17 points in four of five meetings. … This will be the first meeting between former college coaches Kliff Kingsbury and Urban Meyer at any level.

STATS AND STUFF: Murray and Jaguars QB Trevor Lawrence are two of the seven active NFL quarterbacks who were selected with the No. 1 overall pick in the draft. ... This is the second straight year the Cardinals have started 2-0. They lost the next two games last year. The Cardinals have started a season 3-0 four times since 1970. ... Cardinals WR Rondale Moore leads all rookies with 182 yards receiving and 268 all-purpose yards through two games. ... DE J.J. Watt has 17 career sacks against Jacksonville, all while with Houston. ... Cardinals K Matt Prater made a franchise-record 62-yard field goal to end the first half in last week’s game. He has the franchise record for Denver (64), Detroit (59, twice) and the Cardinals. … Jacksonville has lost 17 consecutive games, nine shy of tying the NFL record set by Tampa Bay. … The Jaguars are trying to avoid their sixth 0-3 start in franchise history (1995, 2003, 2013, 2014, 2016). Three of those five seasons came with first-year head coaches. … The Jaguars will face overall No. 1 picks in consecutive weeks, with Cincinnati’s Joe Burrow up next after Murray.