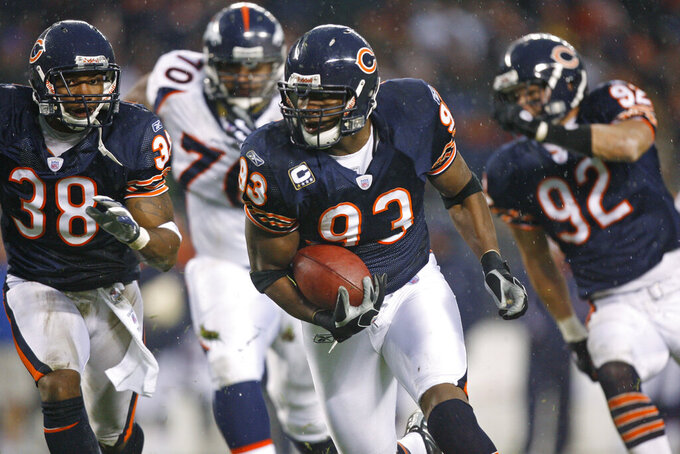 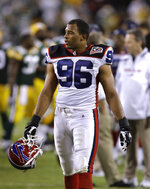 Former NFL players are helping athletes prepare for life off the field.

Copeland Bryan, who played three seasons in Buffalo and Detroit, and Cameron Lynch, who spent four seasons with the Rams and Tampa Bay, participated in the NFL Business Development Program in partnership with Visa. They took part in the NFL Player Care Foundation’s fourth annual Super Bowl Career Fair in Los Angeles, and are completing, two-year rotational program across various Visa business lines.

“Being a former athlete, I just realized that the industry could do a better job of providing guidance to our high net-worth individuals, especially our athletes, and using our platform to help with financial decisions,” Ogunleye said on the AP Pro Football Podcast. “I made a ton of money; that didn’t make me an expert in money. So, I went back to school, I educated myself. But, I do feel like our advisors at our firm should have an obligation to teach as they go, teach our athletes to understand what their finances are, and make sure that they have a legacy to fall back on when their playing days are over.”

Ogunleye made the Pro Bowl in 2003 after registering a career-best 15 sacks with the Dolphins. He was traded to Chicago following a contract dispute and signed a $34 million, six-year deal with the Bears.

In his role with UBS, he wants to equip players with information to make smart decisions for their future.

“Financial education, dealing with our financial advisors, make sure they understand, that our athletes need to have a legacy,” he said. “And then also, lastly, dealing with our clients themselves, the athletes themselves and entertainers, making sure that we get behind them, their philanthropic endeavors, the life after the stage, after sports. Because even if you are a Tom Brady, you still have the rest of your life to live, right? What are you going to do with that? Even if you’re an anomaly like myself and played 11 years in the league, I was done in my 30s. I’m still fairly young, so I haven’t retired from life. And I think that what we’re going to do at UBS is we’re going to look at our athletes as businessmen, business women, entrepreneurs, knowing that this is just a small segment of their life. And once those 15 minutes of fame are up on the on the field, we want to make sure that you have a much longer, longer life to live toward getting that legacy for you and your family, maybe the communities that you’ve come from.”

Bryan considered pursuing his MBA at Harvard, Yale or Stanford before the NFL Players Association gave him an opportunity to join the league’s business program with Visa. He is completing his rotation on Visa’s Strategic Initiatives and Global Technology Partnerships team.

“Since coming on, I’ve had a few years getting to do some very interesting work,” Bryan said. “This has been an opportunity to really hone the skills that I had developed kind of from a startup and business development consulting world. I’d always been corporate adjacent, never in corporate. Just getting to see kind of the processes in a corporate structure, in a big company like Visa that gets to touch like every other company in the world is very eye-opening.”

Lynch stressed the importance of preparing for a career after retirement. He last played with the Buccaneers in 2018 but the 28-year-old was ready for the next phase of his life at a young age. He began preparing in college and continued in the NFL.

“While I was playing, I interned in the offseason. I made sure on my off days I did community service to build up that resume for when after I retired,” he said. “Being undrafted, I knew it could come at any day. Thankfully, I ended up at Visa, Silicon Valley, where we’re able to use my skills from on the field and bring them to the boardroom and also getting my MBA, getting that terminology down, going from one team to the other. The playbook is different going from the Rams to the Buccaneers. So going from the field to the boardroom, the playbook is different. So I got my MBA to get knowledge, to get educated and to apply those skills at Visa.”