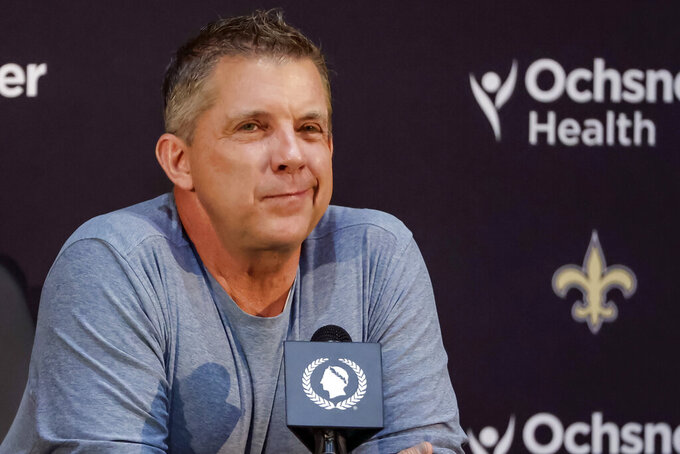 FILE - Sean Payton reacts during an NFL football press conference announcing his resignation as head coach of the New Orleans Saints, Tuesday, Jan. 25, 2022, in Metairie, La. Sean Payton isn't on the sidelines this season, but he will have a great viewing spot for games on Sunday. The former New Orleans Saints coach will spending his weekends on the Fox Sports set in Los Angeles as a studio analyst for their NFL shows. (AP Photo/Derick Hingle, File)

Sean Payton isn't on the sidelines this season, but he will have a great viewing spot for games on Sunday.

The former New Orleans Saints coach will be spending his weekends on the Fox Sports set in Los Angeles as a studio analyst for their NFL shows. Starting Sunday, Payton will appear every week on “Fox NFL Kickoff,” which airs at 11 a.m. EDT and will rotate on “Fox NFL Sunday” with Hall of Fame coach Jimmy Johnson.

Whether this is a one-year deal or longer for Payton remains to be seen. He isn't far from the minds of fans and league executives since he figures to be the top candidate for any opening.

“I do I feel like I’ll coach again probably at some point and we’ll see what those opportunities look like. But right now I’m focused on the task at hand, which is traveling to LA and getting ready to go,” Payton said during a phone interview.

Payton resigned in January after 15 seasons in charge of New Orleans. During his tenure, the Saints advanced to the playoffs nine times and won the Super Bowl over the Indianapolis Colts in 2010.

Before this season, Payton had done some guest appearances on Fox Studio shows and saw the benefits of being in the studio instead of being a game analyst.

“I’ve worked in a studio setting before. I have not been in a booth before and they are entirely different job descriptions,” he said. “I think the studio is a consistent location, generally speaking, where the booth is traveling to the game site. It’s also the smorgasbord of all the games and pregame, halftime or after the game, versus the focus on just broadcasting a single game.”

“Fox NFL Kickoff” producer Jeremy Mennell said discussions with Payton centered mainly around studio work because Payton gets to address topics from around the league instead of just one game.

“He loves the entire league. Now he gets to broaden that horizon and see and talk about more and express much more about the game,” Mennell said.

Payton spent most of the summer in Northern Idaho with his family while also doing some traveling. He did not visit any training camps and said the past couple months have been relaxing.

There have been a couple times though when Payton felt like things were definitely different. The most noticeable for him was the weekend of the draft.

“It was more than the draft itself. There's a whole class of players you're not going to have a frame of reference about because when you prepare for a draft, you're looking at 280 to 350 players," said Payton, who had a 161-97 overall record with the Saints. "You kind of have those in your database when they enter the league regardless of which team they go to.

“But it has been good. It’s always an anxious time when the season gets started, because you’re getting ready to work and grind and you don’t you have an idea how your team might be.”

Payton will be spending most of his time during the season in Los Angeles. He also still has a house in New Orleans.

The one thing Payton is eager about is watching his former assistants. Dennis Allen was promoted to head coach after the last seven seasons as the Saints defensive coordinator while Dan Campbell — who played and coached for Payton — is in his second year in charge of the Detroit Lions.

“You don’t know how much he’s paying attention, but if he’s watching our games, then he’s going to have some opinions, and they will be good opinions. He’s always a good resource,” Lombardi said.

Mennell hopes Payton is with Fox longer than this this season, but also realizes that the constant speculation could create some interesting moments. Payton and Johnson will do a segment on Sunday discussing different teams where one of them will be the Dallas Cowboys. Not only is it the team Johnson led to two Super Bowl titles, but it is where Payton was a former assistant and has been mentioned as a future candidate should Dallas move on from Mike McCarthy.

“There will be some fun there,” Mennell said. “It’s one of those things with Sean, where we hope he’s here for as long as he wants. And we hope that’s a long time. But we understand, he’s still very knowledgeable and very connected to the game.”