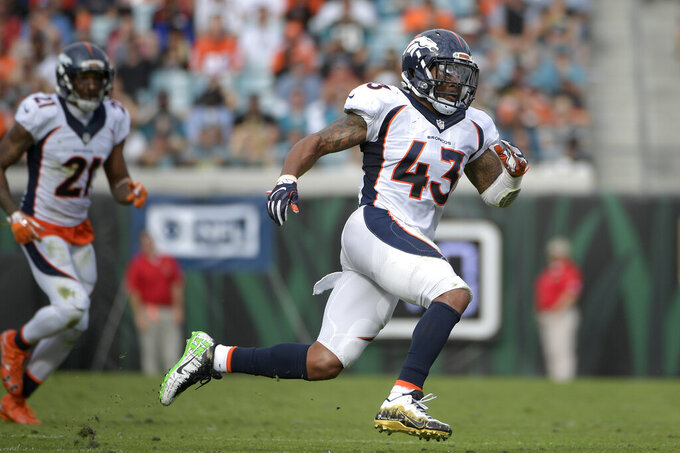 FILE - In this Sunday, Dec. 4, 2016 file photo, Denver Broncos strong safety T.J. Ward (43) follows a play during the first half of an NFL football game against the Jacksonville Jaguars in Jacksonville, Fla. T.J. Ward, one of the members of the Denver Broncos’ famed “No Fly Zone” secondary, announced his retirement from the NFL on Wednesday, April 21, 2021. Ward helped the Broncos win Super Bowl 50. Ward played eight seasons in the NFL with Cleveland, Denver and Tampa Bay. He last played in 2017 for the Buccaneers.(AP Photo/Phelan M. Ebenhack, File)

T.J. Ward, the walk-on at Oregon who became a key part of Denver's famed “No Fly Zone” secondary that helped the Broncos win Super Bowl 50, officially announced his retirement on Wednesday.

Ward played eight seasons in the NFL, earning All-Rookie team honors, two trips to the Pro Bowl and second-team All-Pro honors. He last played for the Buccaneers in 2017, although he spent a month with the Cardinals last season.

“This period came fast, and yet it felt prolonged,” Ward wrote in an open letter announcing his retirement. “We each have our own journey in this life and in this sport, and I proudly followed mine until my football path was complete.”

A second-round pick by the Browns in 2010, Ward played eight seasons in the NFL, including three in Denver, where he teamed with Chris Harris Jr., Aqib Talib, Darius Stewart and Bradley Roby to form one of the best defensive backfields in the game.

The “No Fly Zone” was the backbone of Denver's dominant defense that led the Broncos to a 24-10 win over Cam Newton and the Carolina Panthers in Super Bowl 50, which was Hall of Famer Peyton Manning's farewell game.

“For sure, it's the hallmark moment,” Ward told The Associated Press. “That team, that year was very special, and to finish against the No. 1 offense against the No. 1 defense — and being underdogs pretty much that whole season — and the group of guys and the relationships we built, the camaraderie will last a lifetime. So, I'm definitely fortunate to play with the group of guys I played with on that team.”

Ward said playing in today's era of offensive fireworks made his time in Denver even more special.

“For those years, we were on top of the league, No. 1 in most categories,” Ward said. “We did everything you could do as a defense.

“It wasn't like back in the day. Nothing against those other great defenses, but they're lining up in ‘12 personnel’ (two tight ends, two running backs) all day, every day,” Ward said. “Those were smash-mouth days, so I wouldn't say they were easier, but just a different type of football you had to stop.”

Ward said Denver's defense led by the “No-Fly Zone” could have played in any era.

“Could our secondary play man and zone? Could our D-line rush and stop the run? Could our linebackers play the run and the pass. And you look up and say yes. Well, that's a special defense."

Ward said he feels he could still play at age 34 but has a lot of other things in his life to attend to other than football.

“Raising my son. He's 8 months old. That's first and foremost on top of the list,” Ward said. “I have some business interests, my real estate firm, I've got a management company that you guys will hear about soon. I was writing a book for a while. I have different things like my fashion, my Ward Corp line. So, a bunch of different things.”

Ward said last year in Arizona he felt like he was still in his prime. “So, physically, mentally, I know I could play," he said, "but it's just not time for me anymore.”

In his letter, Ward thanked members of his family, Oregon for giving him a chance, Cleveland for drafting him, Denver for “three amazing years," and Tampa Bay and Arizona for giving him another shot. He thanked his fans and ended with this: “Finally, thank you football.”