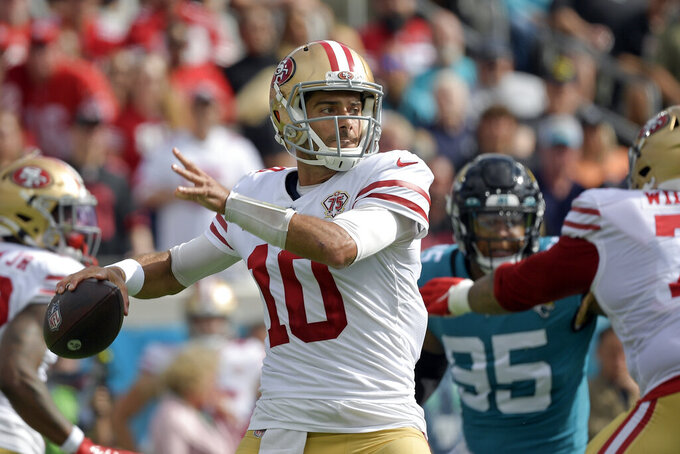 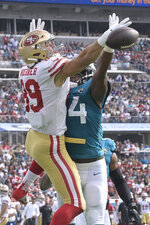 JACKSONVILLE, Fla. (AP) — Making a cross-country trip following a short week that included their most impressive victory of the season, the San Francisco 49ers had the potential for a letdown against Jacksonville.

They instead delivered a beatdown.

Jimmy Garoppolo threw two touchdown passes for the third consecutive game, and the 49ers dominated Jacksonville 30-10 on Sunday for their third win in four weeks.

“I don’t feel like some light clicked on or nothing,” Niners left tackle Trent Williams said. “That’s what we want to do every game. Sometimes they make a good play, we make mistakes and it doesn’t go our way. But that is how we always want to play a game like that.”

Coming off a 31-10 stunner against the Los Angeles Rams on Monday night, the 49ers (5-5) traveled 2,700 miles, kicked off at 10 a.m. West Coast time and looked every bit like a playoff contender for the second time in six days.

San Francisco scored on its first five possessions, including opening the game with a 20-play field-goal drive that took more than 13 minutes, and set the tone for what would be another long day for the Jaguars (2-8).

The Niners ran 33 of the game’s first 37 plays and had more first downs (14) than Jacksonville had yards (12) midway through the second quarter.

The game was so lopsided early in the third quarter that San Francisco called for a tackle-eligible play on third-and-goal from the 1 that resulted in Williams getting his first career target. Garoppolo threw high, drawing laughs from everyone on San Francisco's sideline, but he found George Kittle for a touchdown on the next play.

“Man, it was such a blur,” Williams said. “Once I seen Jimmy throw it, I was like, ‘Oh, yeah, this is my time now. I got to go get this.’ As soon as I left the ground, I got blasted. I don’t know who hit me. I felt like it was like 10 people right there. It’s definitely way harder than it looked for sure.

“I got different respect for receivers now.”

The Jaguars finished with 200 yards on 44 plays, tied for the fifth fewest in franchise history. Rookie quarterback Trevor Lawrence put his arm around coach Urban Meyer late in the game and got some words of encouragement.

Garoppolo completed 16 of 22 passes for 176 yards. He connected with Brandon Aiyuk and Kittle for scores. It was Kittle’s third TD in as many weeks. Deebo Samuel ran eight times for 79 yards and a touchdown.

The Niners were equally stout on the other side of the ball, sacking Lawrence three times, stuffing James Robinson, and not allowing a touchdown until 3:09 remaining.

“There’s not much left to say," Lawrence said. "Just got to keep going. Season’s not going to get canceled. ... We got our butt kicked. It didn’t look good all the way around. Where you go from here is just keep going to work, everybody stay together, keep fighting. I know I will.”

The Jaguars have now lost 14 consecutive games against NFC teams, a skid that dates to the 2018 season. They also fell to 7-44 in their last 51 games against the other conference.

Jaguars safety Rayshawn Jenkins, one of the team’s seven team captains, had a day to forget.

Jenkins was ejected in the second quarter for throwing a punch toward 49ers receiver Jauan Jennings, whose helmet had come off during their exchange. The two started pushing each other after a third-down run that lost yardage. Jenkins threw a punch that got him immediately disqualified.

“That’s not like him," Meyer said. “What can you do? I’m going to go address it. He is a captain. He’s very well respected, respected by me, but we’ve got to get that fixed.”

It was the second mistake in the game for Jenkins. He was flagged for holding on a third-and-5 play that ended in a sack. The Niners got a new set of downs and went on to kick a field goal to cap the 20-play drive that took a little more than 13 minutes.

49ers: LB Azeez Al-Shaair briefly left with a stinger in the first quarter but later returned. CB Davontae Harris left in the third quarter with a knee injury.