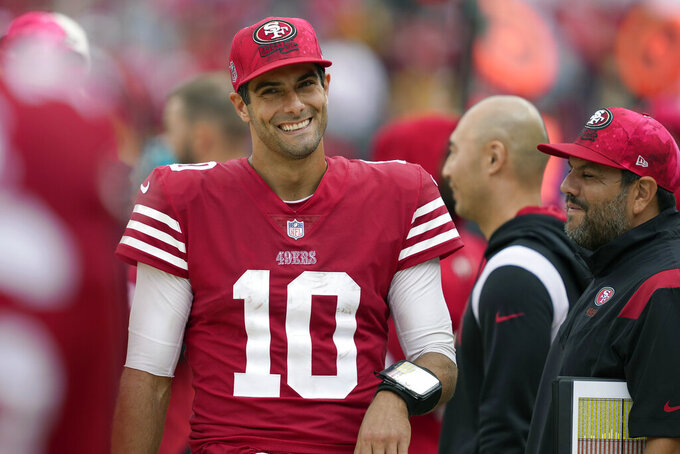 SANTA CLARA, Calif. (AP) — The San Francisco 49ers know painfully well from first-hand experience how an injury to the starting quarterback can derail an entire season.

The Niners never recovered from early season injuries that sidelined Jimmy Garoppolo in 2018 and 2020.

The situation is far different this time around after Trey Lance went down with a season-ending ankle injury in Week 2. Instead of going to an unproven backup with no history of success, the 49ers are in the same spot they were when they ended last season with a loss in the NFC title game.

Garoppolo is back as the starting quarterback, leading fullback Kyle Juszczyk to say it “felt like Niners football.”

“It kind of felt the same,” Juszczyk said about the switch from Lance to Garoppolo. “We’ve been running the ball since the first snap of the season. So that’s why I was kind of getting that. It’s that not too much has really changed.”

Garoppolo lacks the running ability of Lance and doesn't have as strong an arm on deep passes.

But the foundation of the offense is the same one they've always run under coach Kyle Shanahan so he believes the differences will be mostly minor.

“We put all the same stuff in last year too, so it is not as big of a difference as people think,” Shanahan said. "You’re running really the exact same runs. Just do you want to get in pistol and read someone or do you want to hand it off and not read them. It doesn’t change it as much as people think.”

The biggest difference might be something that seems minor, but is very noticeable to the players in the huddle: Garoppolo's voice.

His loud delivery cuts through crowd noise, brings a level of calm to the huddle and might be Garoppolo's most unique attribute.

“It’s just clear. It’s distinctive,” Juszczyk said. “He’s a leader, it’s commanding. That was one of the first things I noticed about Jimmy when he steps into the huddle is just how much he takes command of the huddle. It’s just really well orchestrated.”

But the Niners will need more than just command in the huddle if they want to have the kind of success they're hoping for this season as a Super Bowl contender.

Despite a 31-14 record as the starter in San Francisco, Garoppolo's limitations led to the decision in 2021 to trade three first-round draft picks to take Lance third overall.

San Francisco was all set to trade Garoppolo away, but he needed shoulder surgery in March which dampened any potential interest early in the offseason.

By the time Garoppolo was healthy there were no starting jobs available so he opted to stay in San Francisco on a reduced salary following an awkward training camp where he threw on his own on a side field and didn't attend any meetings while the rest of the Niners prepared for the season.

But Garoppolo's decision on Aug. 29 to take the reduced salary has left the Niners in much better shape following Lance's injury because they have a proven starter ready to take over.

Garoppolo had a non-guaranteed $24.2 million salary for this season, but agreed instead to take $6.5 million guaranteed with the chance to earn up to $16 million depending on playing time and other incentives.

He already earned an extra $350,000 for playing at least 25% of the snaps on Sunday and the Niners winning the game.

“It’s never about you. I’m not a big me guy,” Garoppolo said after the game. "It’s about winning football games. I’m a big believer in that and people can say whatever they want, talk stats, whatever, but when you win football games, that’s what we’re here to do. That’s all I’m trying to do.”

NOTES: TE George Kittle practiced on a limited basis after missing the first two games with a groin injury. ... DL Arik Armstead (foot) sat out practice, but is expected to play. ... San Francisco promoted RB Marlon Mack from the practice squad to the active roster and signed RB Tevin Coleman and QB Kurt Benkert to the practice squad.