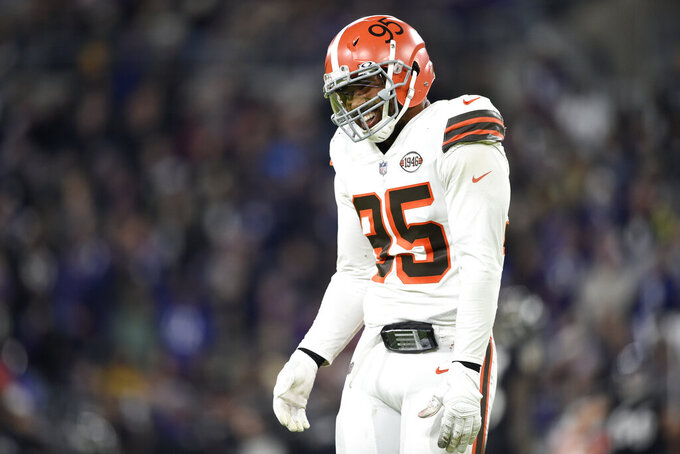 After Friday's workout, Garrett was asked if the Browns (6-6), coming off their bye week and in the thick of a playoff race, had worked with a sense of urgency and attention to detail as they prepared for the season's biggest game.

“Not as much as I wanted to,” the 2020 All-Pro edge rusher said. "But we still got another two days. Guys will sharpen up and we’ve got leaders that are on this team who will make them get prepared and get ready for Sunday, because it’s not end all be all today.

“But when the time comes, we need everybody on their Ps and Qs and ready because it’s win or go home right now.”

If all that wasn't troubling enough, starting rookie cornerback Greg Newsome suffered a concussion when he fell and hit his head on the final play of practice. Newsome, a first-round pick from Northwestern who has had an impressive first season, left the field with a trainer holding his helmet.

It's less than an ideal situation for the Browns, who trail the Ravens (8-4) by two games in the AFC North with five to play and have zero margin for error. Cleveland probably needs to win four games to qualify for the postseason for the second straight year.

While Garrett wasn't pleased with how practice went, he stressed there was time to get things together.

“I’m not going to sulk or sink my head,” said Garrett, who has 14 sacks, two behind Pittsburgh's T.J. Watt for the league lead. "I mean, guys go about things differently. It’s not only on us as players, it’s coaches, it’s everyone having a focus on the task at hand.

“We all have to look in the mirror and say obviously if we don’t win this one, there won’t be any postseason for us. We’ve just got to come together tomorrow, today in meetings and we’ll get right. We’ve still got another 48-plus hours.”

This isn't the first time Garrett has challenged his teammates. Earlier this season, he said if teams were going to focus on stopping him, then others needed to step up. The Browns did just that, getting nine sacks — Garrett had 4 1/2 — and holding Chicago to 47 total yards in a 26-6 win.

While he's got a chance to win the sacks title and perhaps the NFL Defensive Player of the Year, Garrett said all he wants to get his hands on are wins.

“Nothing matters if we don’t make the playoffs,” Garrett said. “I mean DPOY is nice, but I want to be remembered for bringing some Super Bowls here.

“Individual glory, that will come and go, but the city will remember a Super Bowl. If I win DPOY and then we don’t win anything, then our names won’t go down and be remembered for anything.”

It's been a strange few days for Colquitt, who spent 15 seasons with the Kansas City Chiefs and was released by Atlanta earlier this week. He averaged a career-best 47.7 yards per punt in six games for Falcons..

A two-time Pro Bowler, Colquitt had barely gotten home to Kansas when the Browns called.

“I had to throw stuff in two bags and go,” the 39-year-old said. “I literally got back from Atlanta and in like 36 hours I was like in a plane and coming up here. It was a tight window.”

It's even tighter for him to get up to speed with long snapper Charley Hughlett and kicker Chase McLaughlin before Sunday. The trio spent the early portion of practice going over the nuances that make kicking an art form.

Colquitt's younger brother, Britton, punted for the Browns from 2016-18.

“As I’ve been walking around the facility I’m seeing a lot of heads stick out of rooms,” he said. “I see people looking out, ‘Is that Britton? No, it’s Dustin.’”