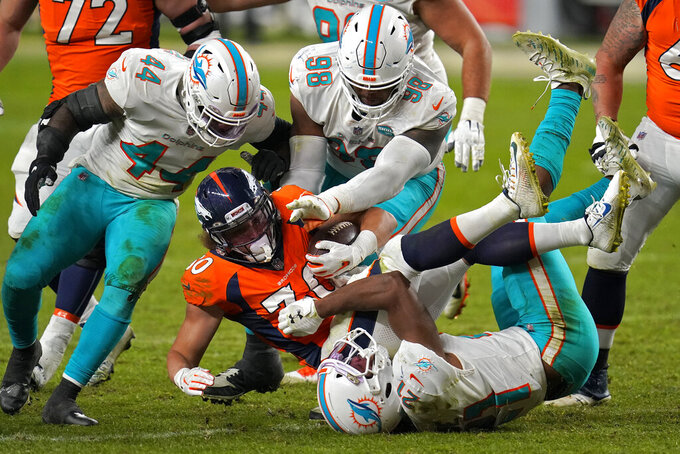 MIAMI (AP) — While the Miami Dolphins are much improved in the past 12 months, their run defense is still far from championship caliber, which might keep them out of the playoffs.

The Dolphins gave up 189 yards rushing in last week's loss at Denver, an indication there has been no improvement since Week 1, when they allowed 217 in a loss at New England.

“We didn’t do a good enough job, obviously,” cornerback Byron Jones said. “It comes down to simple stuff. It’s setting edges, tackling, eliminating blocks, not staying blocked and making tackles and all of that good stuff. It really comes down to individual effort."

The Dolphins' run defense makes even Sunday's matchup against the New York Jets potentially problematic. The Jets are 0-10 and lost 24-0 at Miami in Week 6, but they’re averaging a respectable 4.2 yards per carry and are sure to test the Dolphins' weakness.

The Dolphins are 6-4 and in the mix for their first AFC East title since 2008, and defense has been a big part of their surprising success. They're tied for third in the NFL with 17 takeaways, and rank fourth in points allowed at 20.2 per game.

But coach Brian Flores' blitz-happy approach is most effective when the Dolphins have a lead and can dial up the pass pressure to force mistakes, which was their recipe during a recent five-game winning streak.

Last week they fell behind, and Denver used its ground game to keep gashing Miami's multiple fronts. The Broncos' pulling guards on power sweeps made them look like the Vince Lombardi Packers, and their rushing total was a season high.

“Miami plays some fronts that were popular in the '60s,” Broncos coach Vic Fangio said. “Because of the way they play their defense, those runs were appealing to us.”

“There are numerous ways that, when we’re moving around, people have tried to attack us,” Boyer said. "Some things have been more successful than others. There are ways for us to combat that. It comes down to just putting the players in a good position based on situation.”

Personnel is also a problem. End Emmanuel Ogbah has eight sacks, but sometimes struggles to set the edge. Rookie tackle Raekwon Davis has been stout, but interior depth could be better. Veteran newcomer Kyle Van Noy hasn't made the expected impact at linebacker while battling injuries.

One of Miami's best run stoppers has been linebacker Andrew Van Ginkel, a fifth-round draft pick last year. But like his teammates, Van Ginkel was too often left grasping for air by the Broncos' Melvin Gordon and Phillip Lindsay, who each topped 80 yards while averaging more than 5.0 yards a carry.

“Anytime the backs run like that and we can’t defend it, that’s a lot of stress on our defense,” Van Ginkel said. "It’s something we’ve got to improve.”

The Dolphins are allowing 134 yards rushing per game and 4.8 per carry, which ranks 27th and 29th in the NFL.

It's not a new problem; it's a problem second-year coach Flores has yet to fix. Miami ranked 24th or worse in run defense six of the past seven years.

“We’ve got to make better adjustments as a staff,” Flores said, "and our players have to play better.”