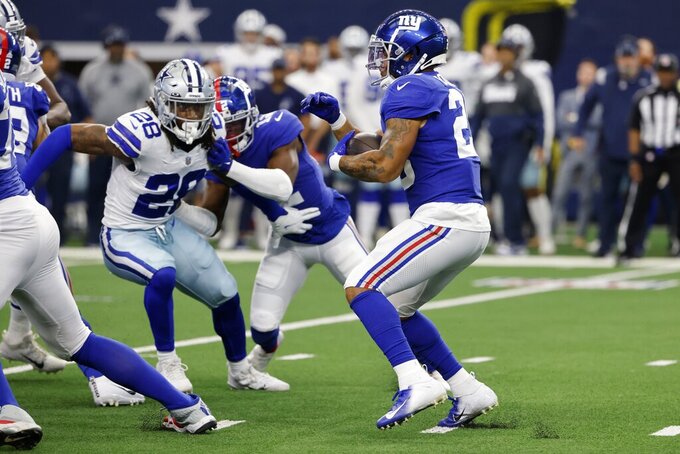 FILE - In this Sunday, Oct. 10, 2021, file photo, New York Giants running back Saquon Barkley (26) carries the ball as Dallas Cowboys safety Malik Hooker (28) rushes in during the first half of an NFL football game in Arlington, Texas. The talented fourth-year running back is probably going to miss at least a game or two after spraining his left ankle on a fluke play early in the Giants 44-20 loss to the Dallas Cowboys on Sunday. (AP Photo/Michael Ainsworth)

EAST RUTHERFORD, N.J. (AP) — After working non-stop for 10 months to recover from an ACL injury and get on the field with the New York Giants, Saquon Barkley is dealing with the frustration of another injury.

The talented fourth-year running back is probably going to miss at least one or two games after spraining his left ankle on a fluke play early in the Giants' 44-20 loss to the Dallas Cowboys last Sunday.

Watching on the bench after the injury, his anger was apparent. The 2018 NFL Offensive Rookie of the Year pounded his thighs with his hands and stared up at the sky with a look that said: “What did I do to deserve this?”

Barkley wasn't the only Giants player hurt. Quarterback Daniel Jones suffered a concussion in a goal-line collision near halftime and left the game. Playmaking receiver Kenny Golladay did not play in the second half because of a knee injury.

Neither Barkley nor Golladay has practiced this week as the Giants (1-4) prepare for a home game against the Los Angeles Rams (4-1) at MetLife Stadium on Sunday.

Jones was surprisingly out on the field Thursday in a non-contact role in practice. That is Stage 4 of the NFL concussion protocol. He could practice tomorrow and then see a specialist and get clearance to play Sunday.

That's provided there are no setbacks.

Jones, who is having his best season, can't talk to the media while in the protocol.

Barkley, who seemingly was on the verge of getting back to his old self heading into the Dallas game after four games, was still irritated four days after his injury. He even blamed himself unexpectedly.

The former Penn State star didn't blame Jourdan Lewis for the injury, even though he turned his ankle stepping on the foot of the Cowboys cornerback after an incomplete pass.

“So, me being mad at myself, that’s the only thing that I could be right there — mad at myself, mad at the world, mad at everybody,” Barkley said Thursday. “You just got hurt again. You know you’re going to be out. For how long, you don’t know, so you’re frustrated. That’s what I meant by saying that.”

Barkley was surprised how quickly his ankle ballooned after the play. He admitted he was reluctant to be carted off, noting when he tore his ACL last year, he was out for the season.

Barkley didn't know what to expect having X-rays and MRIs. He just tried to be positive. There was no break. He intends to listen to the doctors and trainers, attack another rehabilitation and get ready to play again. He has no timetable.

With Barkley out, Devontae Booker and rookie Gary Brightwell will handle the halfback role. Booker caught a TD pass and dived in for another score against Dallas.

“I just want to be out there and help this team win,” said Booker, who signed with the Giants as a free agent in the offseason. “There’s no way else we can put it. We’ve been losing from the beginning, we went 0-3, won against New Orleans, lost last week, so it’s up and down.

"Really, at this point we just, everybody as a whole, wants to win.”