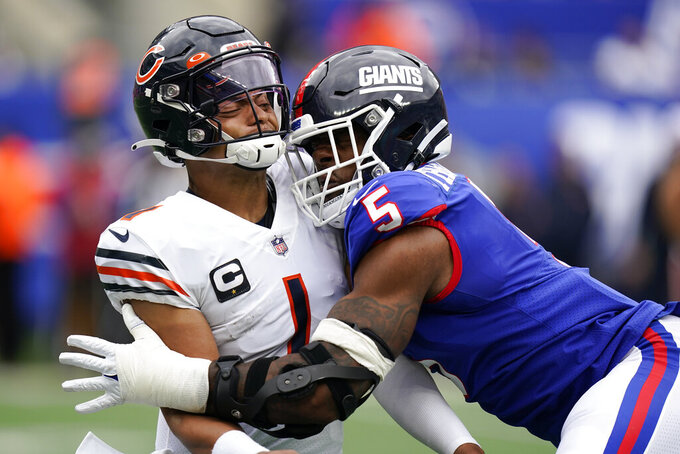 EAST RUTHERFORD, N.J. (AP) — The New York Giants are off to their best start since 2011, and there's no need to tell the team to stay focused.

While the 3-1 record is welcome with a new coach, Brian Daboll's team has injury concerns galore, starting at quarterback.

The Giants aren't sure who will be taking snaps as they begin preparing for a game in London against Aaron Rodgers and the Green Bay Packers.

Starter Daniel Jones has a sprained left ankle and backup Tyrod Taylor is in the concussion protocol. It could result in veteran Davis Webb as the starting QB at Tottenham Hotspur Stadium. He's never thrown a pass in an NFL regular-season game.

Jones was hurt while being sacked in the third quarter of New York's 20-12 win over the Chicago Bears. Taylor suffered a concussion in the fourth quarter on his second series. It forced running back Saquon Barkley to run a wildcat offense during the final seven-plus minutes with Jones on the field to relay the play calls from the coaches.

Daboll said Jones was better Monday, but his status will depend on how he does in practice this week.

However, he is a quarterback who uses his legs to set up his running and passing. That's a big concern and might take away one of his best skills.

The positive for the Giants is Jones walked into the news conference after the game and spoke. Generally, when a player has a serious injury he doesn't talk to reporters.

The best guess is Jones plays. He will use his running skills on a limited basis while making more passes from the pocket.

The running game. The Giants rushed for 262 yards Sunday, averaging 6.0 yards. It was their best rushing performance since they had 308 yards against Carolina in December 2008. They had 44 rushing attempts, a number inflated because they ran the wildcat after Jones and Taylor were hurt. Barkley finished with a career-high 31 carries for 146 yards.

The wide receivers. The group is battered with Kadarius Toney (hamstring) and Wan'Dale Robinson (knee) sidelined the past two weeks and Sterling Shepard (knee) out for the season. Kenny Golladay hurt a knee Sunday. The wideouts had three catches Sunday, one apiece by Darius Slayton, David Sills and Richie James. The Giants completed nine passes overall for 71 yards, their lowest yardage total since 2007 in a win over Miami in London.

DT Dexter Lawrence and veteran LB Jaylon Smith. Lawrence had five tackles, two sacks and three quarterback hits in helping to limit the Bears to four field goals. Smith was promoted from the practice squad and had seven tackles, including one for a loss in his first action of the season.

Punter Jamie Gillen. While he averaged 54.6 yards on five punts, he had two touchbacks and a net average of 42.8 yards. Velus Jones Jr. also had a 19-yard return on a 55-yard punt that gave Chicago a drive starting at its 39.

Daboll said RT Evan Neal (neck), LB Jihad Ward (knee) and LB Kayvon Thibodeaux (back spasms) should all be good for Sunday. Golladay, CB Aaron Robinson (knee) and DL Henry Mondeaux (ankle) are less likely to play. Taylor and S Julian Love are in the concussion protocol. It's going to be a lot of wait and see this week.

3 — The number of consecutive games the Giants have not allowed a first-half touchdown. The defense is yielding an average of fewer than 18 points.

The previous time the Giants were 3-1, the franchise won its fourth Super Bowl. This isn't the same type of team and even a playoff berth is far from certain. Their goal for now should be to continue to play hard, ride the defense and take it from there.