Giants getting healthier ahead of matchup with Commanders 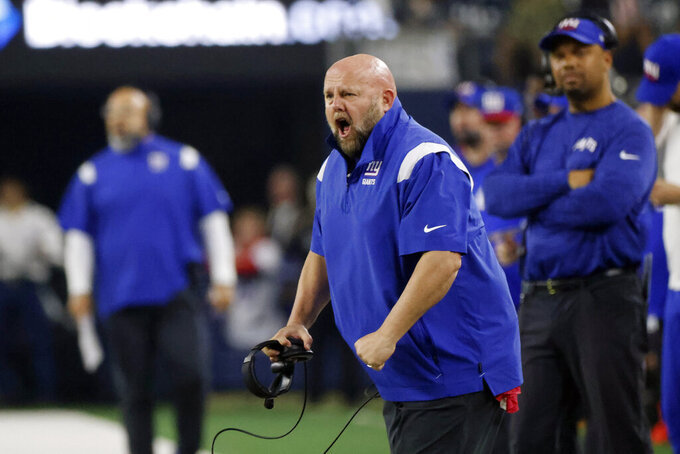 New York Giants coach Brian Daboll yells toward the officials during the first half of an NFL football game against the Dallas Cowboys Thursday, Nov. 24, 2022, in Arlington, Texas. (AP Photo/Michael Ainsworth)

EAST RUTHERFORD, N.J. (AP) — The New York Giants are returning from their extended Thanksgiving break and they are getting reinforcements for their crucial game against the streaking Washington Commanders.

“I would just say, in general, looks promising for quite a bit of guys,” Giants coach Brian Daboll said before practice Tuesday.

The teams are on different trajectories. New York won six of its first seven but has lost three of the last four, including two straight. Washington has won three straight and six of seven after starting 1-4.

There are still are few injured players who may not be able to get back. Top cornerback Adoree Jackson (knee), guard Josh Ezeudu (neck), guard Shane Lemieux (toe) and cornerback Cor'Dale Flott (concussion protocol) did not practice Tuesday. Flott was hurt on Thanksgiving against Dallas. The others missed the loss to the Cowboys.

Ojulari, who led the Giants in sacks last season with eight, has missed the last seven games with a calf injury. He had a full practice and said he was ready to go after months of being frustrated watching.

“Every game I want to take it to another level. Just bring it, all I got for the team for whatever I do to help the team win,” the second-year player from Georgia said. “At the end of the day, all we want to do is win on this long stretch. We got the last few games and just go compete.”

Having Ojulari back gives the Giants bookend pass rushers. Kayvon Thibodeaux, the fifth pick in the draft, has become a factor in recent weeks.

Neal, the seventh overall pick in the draft, has missed the last four games after hurting his knee against Jacksonville on Oct. 23.

Daboll had the team practice in full pads Tuesday and Neal enjoyed testing his knee. It reminded him of his college days at Alabama, where coach Nick Saban had most of his practices in full pads.

“I definitely liked of the perspective of me being out there today than me being on the sideline,” said Neal, who said he used his time off to rehabilitate his knee and evaluate his first seven games of the season.

Trey Phillips, who hurt his neck against the Lions two games ago, has been filling in for Neal.

Bellinger was poked in the eye against Jacksonville and needed surgery to fix his fractured eye socket. He has undergone many eye examinations, some similar to concussion tests. Until last week, the fourth-round draft pick had been bothered by occasional double vision.

He is adjusting to playing with a visor on his helmet and said there were no problems Tuesday dealing with the contact on the field. He was concerned about how it would feel to get hit.

“I need to get back into a rhythm and game speed. I feel good about it,” said Bellinger, who had 16 catches for 152 yards and two touchdowns, which remains tied for the team high in TD catches.

Bellinger is an excellent blocker and his return should help the running game, which has been held under 100 yards the past two weeks in losses.

“We are just ready to get back out here and make a positive impact and hopefully help the team win,” Neal said. “That’s what it’s about.”

It's hard to say whether Bredeson will be ready to return to his starting role at left guard after missing the last four games.

Ezeudu started the first two games, Lemieux got a start before reinjuring a toe and Jack Anderson started against Dallas.

With center Jon Feliciano (neck) sidelined last week, Nick Gates started at center. It is uncertain whether Felicano will be back this week. If he is, he could start at center and Gates could move to guard.

On defense, cornerback Fabian Moreau (oblique) may return. He started six straight games until sitting out against the Cowboys. His return would help, with first-year pro Nick McCloud and second-year pro Rodarius Williams both ready to man to other cornerback spot.