Giants return from bye focused on Tom Brady and Buccaneers 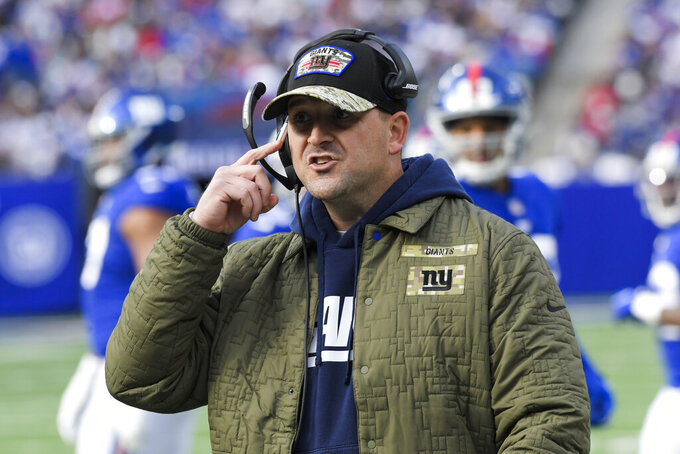 EAST RUTHERFORD, N.J. (AP) — After self-scouting his team and doing a little preparation on the upcoming game against Tom Brady and the Bucs, New York Giants coach Joe Judge gave himself a little time to relax during the bye week.

Judge went to his son's high school playoff game and then went to a little league football game where a second son plays and a daughter is a cheerleader. Both won.

The 39-year-old also got a chance to channel surf NFL games on Sunday before returning to work on Monday.

“You’ve got to prioritize and obviously right now, football is very significant in all of our lives,” Judge said before practice. “It’s our job, it’s our career path, but also when the families come around, you’ve got to make sure you take time to carve that time out.”

The players had a light day of work in their return. It focused on getting bodies moving again, working on fundamentals and introducing a scheme or two for the final eight games, which start with a nationally televised matchup against the defending Super Bowl champions, who are now 6-3 after two straight losses.

The Giants (3-6) have won two of three, including an impressive win over the Las Vegas Raiders leading into the bye week.

Remarkably, New York still is in the playoff hunt, 1 1/2 games out of the seventh and last wild-card spot in the NFC.

Judge didn't bother discussing that with the team on Monday. His focus is on Tampa Bay.

“They’re one of the best teams in the league for a reason," Judge said. “They have arguably the greatest player to ever play the game down there running the huddle, so we’ve got a lot of things to prepare for. Talking about hypotheticals, we’ve got enough real things coming at us in a week’s time.”

The Giants are hoping this is the week star running back Saquon Barkley returns to the lineup for the first time since Oct. 10. He sprained his ankle stepping on the foot of a Cowboys defensive back while running a pass pattern. He missed most of last season after tearing his ACL in the second game.

While Barkley missed a couple of days before the Raiders game because of a positive COVID-19 test, he was back out on the field on Monday.

Judge also added that running backs coach Burton Burns and running back Gary Brightwell are back with the team after being sidelined by positive COVID-19 tests. The Giants had a rash of false positive tests in the week leading up to the game against Las Vegas.

“Everyone’s had to test, take multiple tests before getting in the building today and that includes every coach, every player, every staff member,” Judge said, adding no one has tested positive.

Tight end Evan Engram said getting the win over the Raiders helped going into the bye.

“That was big just for our morale and our mindset as a team,” said Engram, who returned to Mississippi to watch its win over Texas A&M. “It was definitely good to get away and take some time off.”

NOTES: The Giants activated Brightwell off the reserve-COVID-19 list. ... LT Andrew Thomas, who has been on IR with ankle and foot injuries, worked with the trainers. He is eligible to return against the Bucs.