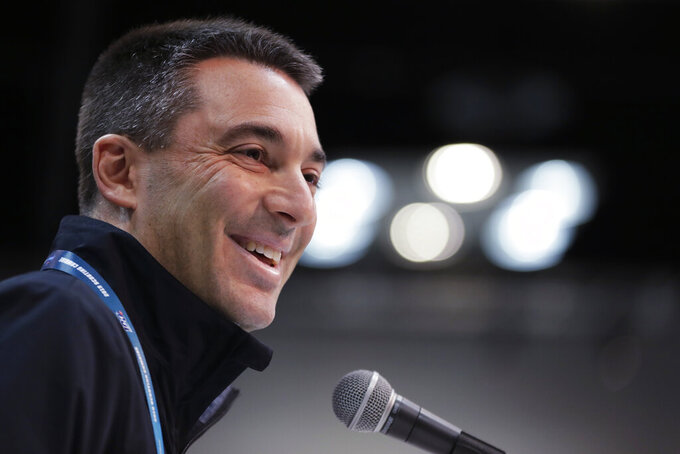 FILE - In this Feb. 28, 2019, file photo, Los Angeles Chargers general manager Tom Telesco speaks during a news conference at the NFL football scouting combine in Indianapolis. Telesco goes into his 10th season as general manager after spending $218 million during free agency with most of that devoted to upgrading a defense that was ranked 23rd last season. (AP Photo/Michael Conroy, File)

COSTA MESA, Calif. (AP) — For nearly six months, Tom Telesco has heard how good the Los Angeles Chargers look on paper with one of the league's top young quarterbacks and after aggressively addressing the defense in the offseason.

Telesco realizes the ultimate indicator is how the team he has built performs on the field.

“I hate hearing that things look good on paper. You don’t really know what you have, until we actually start playing. You can only see so much in practice,” said Telesco as the Chargers prepare to host the Las Vegas Raiders om Sunday in an early AFC West matchup.

Telesco goes into his 10th season as general manager after spending $218 million during free agency with most of that devoted to upgrading a defense that was ranked 23rd last season after a 9-8 finish and missing the playoffs with a last-second overtime loss to the Raiders in the regular-season finale.

Most of the new players on defense have experience with coach Brandon Staley's scheme, either from his one season as the Rams defensive coordinator or when he was a position coach with Denver and Chicago.

“You got to make sure you spend it on the right guys, which I think we did,” Telesco said. “It kind of lined up that we had a good amount of space to use. We had a defense that had to kind of get turned over a little bit to make sure guys were fitting what we’re going to do.

“What's nice is many of these guys you sign over the years don’t quite play up to the way they did with their last team. So you just try and mitigate your risk as much as you can. If you do find some guys that either played in this scheme, which helps, or if you get lucky, maybe had that coach, it just increases their chances of playing. You can’t do obviously with every guy, but it just increases our odds of playing at the same level they did. Or if you get lucky, maybe a little bit better for the team they came from.”

Jackson and defensive lineman Austin Johnson are the only notable additions that doesn't have prior history with Staley. Defensive lineman Sebastian Joseph-Day, Morgan Fox and linebacker Troy Reeder were with the Rams in 2020, while Mack and cornerback Bryce Callahan were coached by Staley when he was a position coach.

Telesco's defensive spending extended into training camp when he made Derwin James the NFL's highest-paid safety with a four-year extension worth $76.5 million. The Chargers' biggest extension though could come next year when they can begin negotiating with Justin Herbert.

If Herbert makes the Pro Bowl this season, his fifth-year option for 2024 would be the franchise tag for a quarterback, which will be more than $30 million. The negotiations of Cincinnati's Joe Burrow, the top pick from 2020 who led the Bengals to the Super Bowl last season, and Baltimore's Lamar Jackson will also influence the market, especially when factoring guaranteed money.

While other general managers have extolled the benefits of having a starting quarterback on a rookie contract, Telesco hasn't subscribed to that theory.

“I don’t see it’s easier this way. It’s just different,” he said. “There's windows every year. You just have to build a team differently based on the reality of where your team is at.”

Whether Telesco is around to negotiate that extension with Herbert depends a lot on this season. He is tied for the fifth-longest tenure of the 29 teams that have a general manager. Compared to the other five, he is the only one whose team hasn't won a division title while four of the five have won a Super Bowl.

When asked what the true measuring stick of a general manager should be, Telesco said wins and losses. The Chargers are 71-78 since 2013 with two postseason appearances and none since 2018. Their .476 regular-season winning percentage (69-76) is tied for 19th.

By comparison, the Arizona Cardinals are 77-70-2 overall under Steve Keim, who was hired one day before Telesco, with three playoff trips and the NFC West title in 2015.

Twelve teams have changed GMs over the past two seasons. If Telesco is feeling pressure — both in job status and competing with the defending Super Bowl champion Rams for the attention of Los Angeles football fans — he isn't saying it.

“It’s a pressurized job no matter what. I wouldn’t call it any extra this year. I’ve wanted to win every single year," he said. “We could be in Omaha, Nebraska. We’re paid to win. We’re not paid to just participate. That’s our job, just to win.”