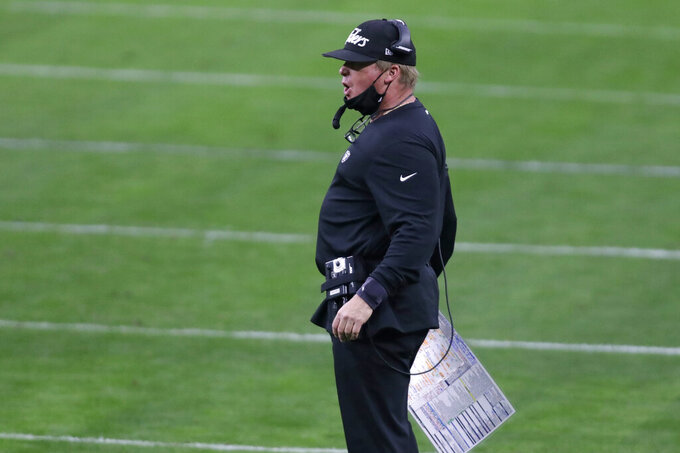 Las Vegas Raiders head coach Jon Gruden speaks to his players during the first half of an NFL football game against the Indianapolis Colts, Sunday, Dec. 13, 2020, in Las Vegas. (AP Photo/Isaac Brekken)

After watching the Las Vegas Raiders' defense get gashed for more than 200 yards rushing for a second straight game and his team allow at least 30 points for the eighth time in 12 games, Gruden fired defensive coordinator Paul Guenther.

Gruden announced the move shortly after the Raiders (7-6) got overwhelmed in a 44-27 loss to Indianapolis on Sunday that dealt a severe blow to their playoff hopes. Defensive line coach Rod Marinelli will take over as coordinator for the rest of the season.

“It’s really hard,” Gruden said Monday. “I have a lot of respect for this guy, Paul Guenther. He’s a good friend of mine. Very hard to do. But I really feel for the best interests of this team right now we need a new voice. We need somebody that has a different perspective, a different approach. I think it’ll help us. It will help this young group of guys that we’re coaching right now.′

After showing some signs of progress early in the season, the defense has fallen apart in recent weeks, starting with allowing a winning TD drive to Patrick Mahomes and the Chiefs in Week 11.

The Raiders lost 43-6 the following week in Atlanta; gave up 206 yards rushing to the winless Jets before winning in the closing seconds; and then gave up 212 more yards rushing to Indianapolis. Las Vegas had no sacks, no takeaways and gave up 7.7 yards per play.

“We miss-fit some runs, sometimes our force isn’t where it needs to be. Sometimes we don’t tackle well. Sometimes it’s a play here, a play there,” Gruden said. “We have to do everything better, honestly. Not just one kind of run. Inside runs, outside runs, the run game. With that said, you have to stop the play-action pass and we have to stop a lot of other things that have been problematic. We’ve got a lot of work to do, but we have good players here.”

“We need a new voice right now and Marinelli is going to give it to us,” Gruden said.

Kicking game. There were few positives for the Raiders, but Daniel Carlson did make both field goals and all three extra points. That gave Carlson 116 points on the season, the most in franchise history through 13 games. He needs 27 over the final three games to break Sebastian Janikowski’s record of 142 in 2010. Carlson is 24 for 26 on field goals and is tied for third in the league in scoring.

Running game. Even the return of leading rusher Josh Jacobs and right tackle Trent Brown couldn’t get the running game going. The Raiders had 22 carries for 79 yards and have been held to less than 90 yards rushing in four straight games for just the second time in the past 15 seasons. It happened five games in a row in 2014.

Marinelli. The 71-year-old coaching veteran gets another shot to be a defensive coordinator. Marinelli held the role the past six seasons in Dallas but left to reunite with Gruden. Marinelli was defensive line coach in Tampa Bay under Gruden when the Buccaneers won the Super Bowl following the 2002 season.

Henry Ruggs III. After providing the winning catch a week against the Jets, Ruggs once again made little impact. He had three catches for 18 yards, all going for 6 yards. Ruggs, the top receiver taken in the draft, has had less than 40 yards receiving in seven of 11 games he’s played.

LB Nicholas Morrow and Abram left the game with concussions and have little time to heal before Thursday’s game against the Charges. ... Ferrell left after playing only seven snaps because of a shoulder injury and his status is in doubt this week.

11 — After committing only nine turnovers on their first 100 drives this season, the Raiders have 11 on their past 36 possessions starting with a late-game interception in a Week 11 loss to Kansas City. The 10 turnovers the past three weeks are the most in the NFL in that span.