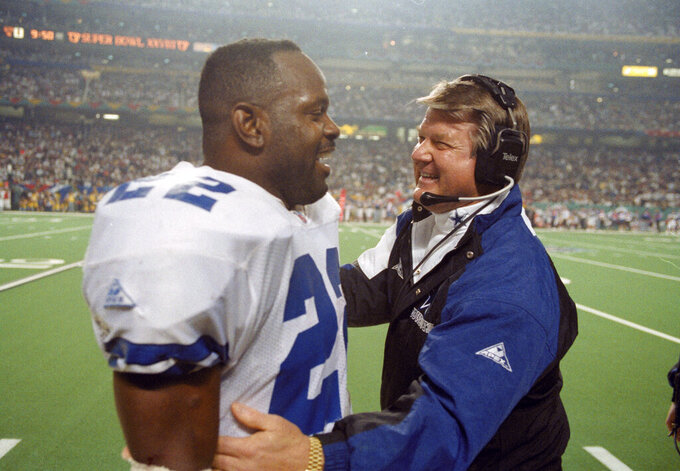 FILE - In this Sunday, Jan. 30, 1994 file photo, Dallas Cowboys' head coach Jimmy Johnson, right, talks with running back Emmitt Smith on the sidelines during the fourth quarter against the Buffalo Bills at the Super Bowl in Atlanta. Jimmy Johnson is being inducted into the Pro Football Hall of Fame. (AP Photo/Ron Heflin, File) 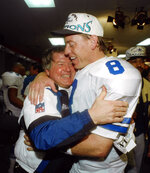 As Jimmy Johnson looks back on the rocky relationship that abruptly ended his championship run with the Dallas Cowboys, he can laugh now. He’s heading into the Pro Football Hall of Fame.

For Cowboys owner Jerry Jones, the emotions are more complicated, with America's Team mired in a 25-year Super Bowl drought.

“Jimmy’s a great coach,” Jones said. "My job was to keep it together — should have had deference to something that was working good. ...

“I’ve never been able to know why I (messed) it up," he added, tears in his eyes. "I can’t answer those questions.”

Jones spoke at the start of training camp, mindful of Johnson's upcoming entry into the hall during festivities Aug. 7-8. The induction ceremony was postponed last year because of the pandemic. Johnson enters as part of a special centennial class.

Jones was elected to the hall in 2017, and for Johnson, the honor likely would have come sooner had he stayed in Dallas longer. He led the Cowboys to the 1992 and '93 championships, and they also won the 1995 title with the team he built.

Even so, Johnson's not a member of the Cowboys' Ring of Honor. He laughed recently when asked about that slight.

“The media is more concerned about this than I am,” he said. “Jerry has told me numerous times he was going to put me in the Ring of Honor. Whenever he's in a good mood and he feels like it, he can do it.”

Johnson and Jones were teammates at the University of Arkansas. They had been long-time friends when Jones hired Johnson in 1989 to replace Tom Landry, the only coach the Cowboys had ever had.

Johnson was coming off a 34-2 three-season run at the University of Miami that included the 1987 national championship. But in Dallas he took over a team that had gone 3-13 in Landry's final season, and there was worse to come.

Johnson's first NFL game was a 28-0 loss to New Orleans.

“The next week, we have a walk-through on Friday, and Jimmy calls the team together,” recalled Troy Aikman, then a rookie quarterback. “Jimmy hadn't lost many games, and we had gotten steamrolled, so he's perturbed. He says, ‘Let me tell you guys something: This losing (stuff), that’s over with.’”

The Cowboys finished 1-15. When the season ended, Johnson said, he was so spent he broke down crying.

“That tells you a little bit about what we went through,” Johnson said. “All we'd known the whole time I was coaching was win, win, win, win. To go through such a difficult season was tough.”

But Johnson said he never lost faith about “turning the thing around” — which became the title of his autobiography.

The Cowboys won seven games in 1990, and 12 in 1991. Then came back-to-back Super Bowl victories over the Buffalo Bills.

He became the first coach to win a college national championship and a Super Bowl, and the fourth to lead a team to consecutive Super Bowl titles.

Accelerating the Cowboys' improvement was a blockbuster 1989 deal that sent star running back Herschel Walker to the Minnesota Vikings for six high draft choices, with lower picks and other players also involved. It remains the largest trade in NFL history, and perhaps the most one-sided, thanks to the players Johnson drafted as a result, including running back Emmitt Smith, the NFL's career rushing leader.

“Jimmy was a Hall of Fame personnel guy,” Aikman said. “One of his greatest strengths was his ability to evaluate talent and maneuver draft picks. All those things set him up to be a Hall of Fame coach.”

After leaving Dallas, Johnson took a two-season hiatus from coaching, and then replaced another legend. He joined the Miami Dolphins in 1996 after Don Shula reluctantly retired, but was unable to replicate his success in Dallas. Johnson clashed with veteran quarterback Dan Marino and went only 38-31 in four seasons, including 2-3 in the playoffs.

He retired at age 55 after the 1999 season, citing burnout, and has since enjoyed a successful career as an analyst for Fox Sports. He also quietly advises coaches and executives, according to Hall of Fame quarterback Terry Bradshaw, a Fox analyst and close friend.

“He could take over Ford Motor Company if they’re having struggles, and boom, he'd turn it around,” Bradshaw said.

“I don’t think people realize the heads of football and baseball and basketball teams that seek an audience with him. He doesn't know anything about baseball or basketball, but he knows how to turn things around. You have no idea how many corporations seek time with him to find out what made him special and how to run a company. That says it all for Jimmy.”

Now 78, Johnson said the list of people he would want to thank will be too long to recite during his induction speech. By his count, he coached, drafted or recruited 14 Pro Football Hall of Famers, and worked in broadcasting or other roles with another 13.

“It’s the people I've been associated with that put me in the Hall of Fame,” Johnson said.

And that, he said, includes Jerry Jones.