Hall of Fame coach Jimmy Johnson reflects on his career 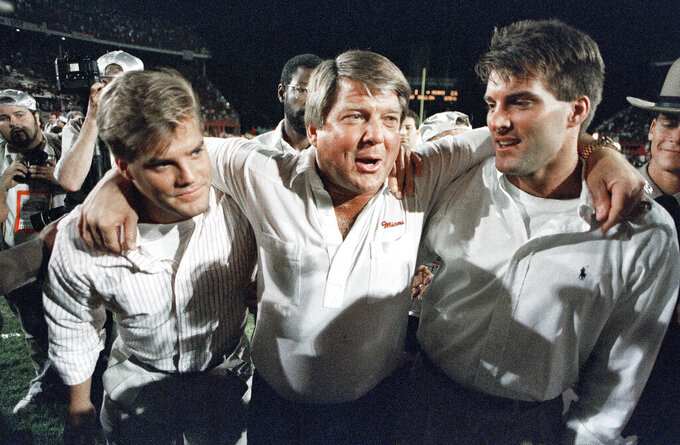 FILE - Miami coach Jimmy Johnson, center, is hugged by his sons, Chad, left, and Brent, rightk, while walking off the field following the team's win over Nebraska in the Orange Bowl college football game in Miami, Jan. 2, 1989. Johnson won two Super Bowls as coach of the Dallas Cowboys and a national championship at Miami. In his view, Johnson’s biggest success has nothing to do with football. The 79-year-old Johnson describes in “Swagger,” his memoir that released on Tuesday, how his addiction to football and winning caused him to never have a family dinner. His two sons played football but Dad never saw them play a full game. (AP Photo/Chris O'Meara, File)

Jimmy Johnson won two Super Bowls as head coach of the Dallas Cowboys and a national championship at Miami. He’s in the Pro Football, College Football and NAB Broadcasting halls of fame.

In his view, Johnson’s biggest success has nothing to do with football.

The 79-year-old Johnson describes in “Swagger,” his memoir that released on Tuesday, how his addiction to football and winning caused him to never have a family dinner. His two sons, Brent and Chad, played football but Dad never saw them play a full game. He was too busy coaching his teams to victories.

Johnson now says his biggest win came when he stepped away from coaching to spend more time with his family.

“I’ve had a lot of success in football, but I’ve really been shortchanged as far as my family, and that’s when I decided to retire,” Johnson said on the AP Pro Football Podcast. “My son Chad was an alcoholic for years. He’s in recovery now, and he went through it, and we spent all kinds of time trying to get him on track. He’s been sober for about 15 years now and he started an alcohol and drug abuse center. It’s so rewarding to see him now.”

Johnson talked about going to a client reunion event at Tranquil Shores, his son’s rehab center in Florida, and listening to parents share stories.

“Mothers and dads went up to the podium and said: ‘Chad, thanks for saving my son’s life.’ One woman went up there and said: ‘Chad, you picked up my daughter at 3 in the morning and drove her around for four hours and talked to her and then took her to detox. Thanks for saving her life.’ I was in tears,” Johnson said. “And so they finish the program and I go up to the podium and I said: ’Nothing that I ever accomplished comes anywhere close to what you are doing at Tranquil Shores. You’re saving lives. And so it puts it all in perspective. Yes, I’m proud of my career, but I’m more proud that I was able to pull back away from football and re-establish my family.”

Johnson spent five years at Oklahoma State before going to Miami in 1984. He led the Hurricanes to an undefeated season and the national championship in 1987 and was lured to the NFL in 1989 by his college teammate, Jerry Jones.

They won two Super Bowls together in Dallas before the relationship fell apart and Johnson ended up going back to Miami to coach the Dolphins. Johnson details in his book how much it bothered him that Jones would try to take credit for personnel decisions when he wasn’t involved in those.

Jones still hasn’t put Johnson in the Cowboys Ring of Honor. He might make Johnson wait a few more years after reading the chapter about their relationship.

Johnson first joined Fox NFL Sunday as an analyst after leaving the Cowboys and he returned after retiring from the Dolphins. Two decades later, he’s still part of the network’s show along with fellow Pro Football Hall of Famers Terry Bradshaw and Howie Long.

“The Fox crew became family to me over the years - good times and good friends,” Johnson writes in his book.