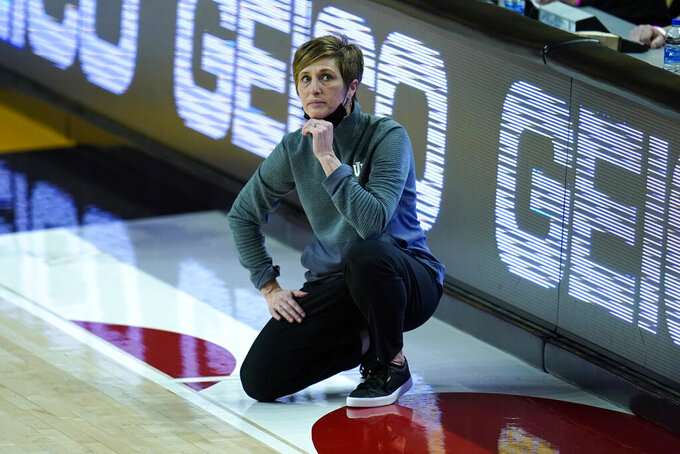 FILE - Indiana head coach Teri Moren looks on during the first half of an NCAA college basketball game against Maryland in College Park, Md., in this Monday, Jan. 4, 2021, file photo. This week, No. 9 Indiana begins a new quest — dethroning No. 7 Maryland as tourney champs in Indianapolis. (AP Photo/Julio Cortez, File)

INDIANAPOLIS (AP) — The Indiana Hoosiers have been checking boxes all season.

They won a school-record 16 conference games, made their first top 10 appearance in school history and earned the No. 2 seed in the Big Ten Tournament, their highest ever.

This week, No. 9 Indiana begins a new quest — dethroning No. 7 Maryland as tourney champs in Indianapolis.

They've rarely arrived in Indianapolis as a favorite and have only reached the semifinals twice since winning the 2002 title as the No. 5 seed. This year, they have a double bye into Thursday's quarterfinals where they face either seventh-seeded Michigan State or 10th-seeeded Penn State.

Still, Maryland (21-2, 17-1) remains the league's most dominant team. It has won 10 straight since an 88-86 loss at Ohio State on Jan. 25 and hopes to use this week as a launching pad for bigger aspirations.

“That’s what we’ve been preparing for, is March," Maryland coach Brenda Freese said after Saturday's victory clinched the regular-season title. “This is the first goal of many."

The next one comes this week when the top-seeded Terrapins square off with either eighth-seeded Nebraska or ninth-seeded Minnesota. A win could move Maryland within one victory of a rematch with the Hoosiers, who they beat 84-80 on Jan. 4 in this season's only previous meeting.

Only this time, Maryland won't be playing on its home court — and the Hoosiers keep chasing milestones.

“We’re just going to prepare like we would for any other game, get our minds right, get our bodies right when we get ready to play on Thursday night," Indiana forward Mackenzie Holmes said. “It's going to be really exciting to have fans finally. It’s going to be nice to see some familiar faces. There’s a lot to look forward to."

Holmes was referring to the Big Ten's decision that up to 2,500 fans will be allowed inside Bankers Life Fieldhouse this week. That's slightly less than the 3,000 fans the NBA's Indiana Pacers have allowed for its last few home games and also less than the 25% limit local and state health officials have approved in an arena that seats roughly 17,000 fans.

The women's teams have traditionally had center stage to themselves in Indy but that won't be the case this week. League officials announced in February that the men's tournament was moving from Chicago to Indy and will be played at Lucas Oil Stadium, home of the NFL's Indianapolis Colts and this year's Final Four. It's just a short walk from Bankers Life to Lucas Oil with the men's tourney set to run from Wednesday through Sunday.

Twelfth-seeded Illinois (4-17, 2-16) meets 13th-seeded Wisconsin (5-17, 2-17) in Tuesday's first and only game. The reason? No. 22 Ohio State (13-7, 9-7) has completed its season after a self-imposed postseason ban. The Columbus Dispatch reported Dec. 22 that athletic department officials made the decision because of potential NCAA infractions.